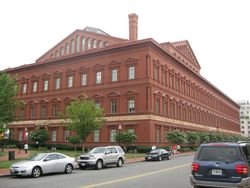 Early June means just one thing to the DC area beerophile: SAVOR! The third incarnation of DC's premier beer and food extravaganza rolled into town last week, and I was fortunate enough to score a free ticket (thanks, BA!). Held at the gorgeous and appropriately decadent National Building Museum, this year's event featured 68 brewers pouring 136 of their finest beers, accompanied by 35 delectable bites, paired by the experts for optimal enjoyment, along with a series of informative educational salons.

So how did this year's event turn out? Shit, I don't remember! God, I used to be able to handle four hours of hardcore drinking without batting an eye; what happened to me? Fortunately, I do have dozens of pictures and pages of nearly illegible notes from which to draw, so let's see what I dredge from my hop-addled memory. 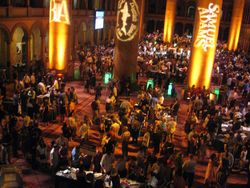 As always, SAVOR had a great selection of breweries whose wares were up for sampling. The Brewer's Association (the event's benefactor) holds an annual lottery each year, taking in hundreds of applications from the eight geographic corners of the US; eight from each region are selected to participate. Thus, there were a lot of new faces at this year's shenanigans, along with some notable returning favorites.

nia's Lost Abbey made a triumphant return this year with two new offerings, the Devotion blond ale, and the Carnevale saison. These beers are almost never available in bars or at retail, so these treats are exactly what make this event worthwhile to the burgeoning beer geeks like myself. Likewise, it was great to see Alaskan Brewing Company, whose rare Smoked Porter is almost never found outside of the frozen land of Palin. The rarely seen left-coast favorite The Bruery also made a great showing with their Coton Old Ale; you'd think a beer that is simultaneously salty, citrusy, spicy, sweet and sour would have a hard time hanging together, but this beer pulls it off gorgeously. 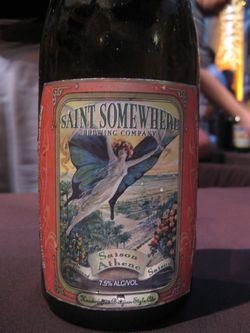 Beerwise, the highlight of the evening for me was Saint Somewhere, a craft brewer based out of Tarpon Springs, Florida, which specializes in Belgian-style ales. The Pays du Soleil Belgian dubbel and the Saison Athene are both rich, fully realized offerings, the former funky and stewy, the latter herbaceous and citrusy. The labels are gorgeous; I just wish they had a different name, as I told everyone I met to check out "St. Elsewhere," which is actually the early 80's hospital drama that launched the career of one Denzel Washington... Anyhow, their beers are low production, but do have representation in the area, so keep  your eyes peeled.

great beers was easier than ever before, as lines seemed much shorter than in previous years -- even at the most vaunted breweries' tables, I never found myself waiting more than a couple minutes. As far as I can tell, the BA sold the same number of tickets as they did for SAVOR 2, so I'm not sure how to account for the difference, but they deserve big props. Also nice was SAVOR's commitment to going "Zero Waste" this year, forgoing the more convenient disposable plastic cutlery and plates for biodegradable bamboo. Rubbish bins seemed in short supply, and all of them were labeled for general use, so I just have to assume they followed through on the back end, and let the kudos stand. 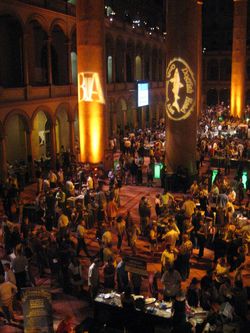 Not everything was sunshine and unicorns at SAVOR. Though there were lots of new brewers, and many returning breweries had great new offerings, not everyone brought their 'A game.' The Boston Beer Company made a lackluster showing with their Sam Adams Lager (yes, the one you can get at 7-11), and their nearly undrinkable Imperial White, which tastes like vodka and bananas blended with bread yeast. Magic Hat, which actually makes some really cool beers, saw fit to bring the ubiquitous #9 and Blind Faith IPA. Local fav Dogfish Head brought some rarer offerings, but ran out of beer fairly early in the night, which is unforgivable, as they were one of the event's major sponsors.

Word of mouth tells me that the salons -- one of the event's major draws, which purport to offer attendees access to fascinating speakers, and some of the rarest beers around -- were a mixed bag. I attended Anchor Brewing's "A Very Rare Beer Tasting," which was marketed as follows: 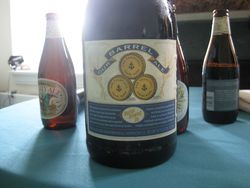 John Dannerbeck of Anchor Brewing will taste and de-construct O.B.A. (Our Barrel Ale). Plan to taste the OBA, the rye whiskey that had aged in the barrel previous and the various beers that made up the final blend. This will be a real treat.

Sounds cool, no? Yeah, well what isn't made clear is that those "various beers" are just the basic Anchor beers you'd find at any decent liquor store (which I would have known, to be fair, had I done a bit of research). The O.B.A. was fine, but nothing special, and though Mr. Dannerbeck certainly tried to be engaging, he didn't seem to know what was expected of him at the event, and went to Q & A within minutes. 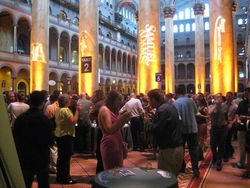 I heard a horror story from Drew about the "Rare Barrel Aged Beers" salon, with Doug Odell of Odell Brewing Company and Patrick Rue of The Bruery. He said the beers were great, and the speakers were interesting, but when he tried to excuse himself to use the restroom, he was denied. This salon, mind you, occurred at 9:45, a good two-hours into the event; is it any wonder one would need to excuse himself after 120 minutes of hardcore drinking sampling? And what if the person in question was not a strapping young man like Drew, but someone with a medical condition? The BA issued him an apology, and chalked it up to a misunderstanding on the part of a volunteer, but it's something they might want to work on for next year.

So all in all, I guess there are two lessons that need be learned: do a bit more research than my lazy ass before you pick your pony, but either way, expect to be cross-legged and sweatin'. 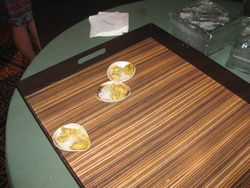 I'll keep this short: The food sucked at the first SAVOR, continued to suck last year at SAVOR 2, and, finally, sucked some more for SAVOR 2010. Like last year, another huge selection of delicious treats were advertised. Pecan Crusted Chicken With Garlic Mashed Potatoes; Potato Gnocchi With Pork & Wild Mushroom Ragu; Baked Goat Cheese in Tomato Sauce With Pita Crisps; these are just a sampling of the several-dozen delectable morsels that I didn't manage to find, as they were out of stock on every pass. From the very start, those apps that I did manage to sample were cold, which made them unappetizing at best, and in the case of the Mac & Very Cheddar Cheese and Cajun Seafood Gumbo, gag-inducing. 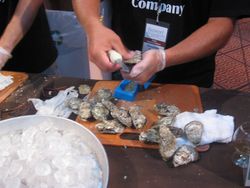 The oysters from Choptank Oyster Company were a nice touch, as always, but they ran out by 10:00, as did the highly touted artisanal chocolates.

The SAVOR event is subtitled "An American Craft Beer & Food Experience." The very reason for the event's existence is supposedly to offer a sublime food and beer tasting experience; to teach and show that beer, like it's more "sophisticated" cousin wine, may be paired with cuisine to create a whole beyond it's parts, a gestalt of gastronomic bliss. To date, they have failed miserably in this.

Last year, SAVOR tickets sold out eight weeks before showtime; this year, they sold out within 10 minutes. The BA has made SAVOR into a hell of an event, such that it is now the axis on which the DC beer community turns. This status is well deserved, as SAVOR continues to be far and away the most exciting and entertaining beer event in town. "Beer" has been and continues to be SAVOR's central focus, and at this point, the top-billing it shares with "Food" has become laughable, and a disservice to the patrons and promoters. As I have suggested in the past, SAVOR is a must-attend for beer lovers -- geek and novice alike -- who wish to experience new and interesting brews they might otherwise never see. The food has been an obvious afterthought from the very start, and curious foodies without a full-on passion for beer should stay far, far away.

My husband and I attended last year and this year and found it to be a pretty well run event. I thought the food was markedly better this year. We decided to eat dinner beforehand this year which I think helped. With any large scale event, keeping food hot and plentiful is a challenge, but I did think the food was decent (and the mac and cheese dfinitely not gag-inducing at all). It's definitely not a foodie event, it's a beer event. But saying the food sucked is too harsh in my opinion.

Sounds like it's a blast (and for someone who didn't "remember" much...you did a pretty great job!) but, how does one get tickets to next year's event if it's selling out so fast?

No, Rob's right, the food sucked. It was presented better and refreshed pretty well, but it didn't taste very good ... again. As for tickets, LoveFeast Table, you have to be on the ball. When they go on sale, be ready to buy them immediately.

Couldn't make it this year but it sounds like it was a bit more on the bad side then the good side from the review you posted. But I take it from the lack of remembering that you had a great time and having a great time at such an awesome beer event is all that really matters.

Actually, Chris, I did have a really good time. The components of the experience need to be weighted, with the beer floor being the heaviest. Yeah, the salon was a rough pick, and then... the food... but it was still a blast.

Really glad to hear that. I guess it's another example of how people talk more about bad experiences over good ones.

Now I'm crossing my fingers that Savor will finally get their act together for next year, when it comes to the food. Maybe actually trying to make it more like the beer side, where there are coutless vendors showing off their best (most of them at least). Can't have one vendor with bad food year after year...well at least I hope not.