In the months, weeks and finally days leading up to the opening of Mussel Bar, Robert Wiedmaier's new restaurant in Bethesda, you could hear people talking on the street about it. "I can't wait for that place to open!" I heard groups of people say as we passed by. People were definitely looking forward to this place opening.  It's been a long time since a new restaurant like this came in Bethesda. The last one I can remember is Redwood, and we all know how that went.

Anyway, Mussel Bar finally opened on Thursday, after pushing back the opening day from Wednesday. Another reason I could tell it was long awaited? The already hour-long wait when Amy and I arrived Friday night at barely 6:30. Luckily, the small bar was no more than one level of people deep so we were able to get a beer and wait it out. We heard the wait times increasing, one hour and ten minutes, 1 hour and 20 minutes, until when we were finally seated, 1 hour and 30 minutes. Not bad for it only being your second night open.

When you first enter the restaurant, the aroma of the mussels and all the broths is intoxicating. Someone should bottle this as a perfume/cologne and sell it. There is not much of a waiting area, so you are forced to congregate around the bar, which isn't very large itself. Overall, the entire restaurant seats a maximum of 125 people, which makes me think there will be many long waits in the future for people. 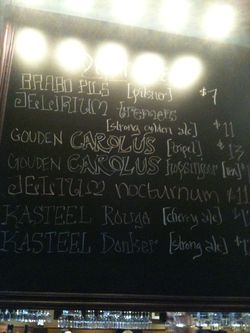 As with most of Robert Wiedmaier's restaurants, beers, not wines, are the focus. A small selection of draft beers is available, with a large (not Brickskeller large) selection of bottled beers. On tap Friday night, were Brabo Pils, Delirium Tremens, Gouden Carolus Hopsinjoor, Gouden Carolus Tripel, Kasteel Rouge, and Kasteel Donker. Prices for the draft beers range from $7 to $13, which was a little pricey in my opinion. At least that's what I thought at first, until I tried the Gouden Carolus Tripel and realized what I'd been missing all these years. While we were waiting at the bar, a guy came up and ordered a Bud Light. "Sorry sir, we don't have Bud Light," the bartender said.

"Do you have any light beers?" he replied.

(I'll leave the any further beer analysis to the likes of Drew and Rob since they know a lot more in this area than I.)

Once we were finally seated, everything went pretty smoothly, particularly for a new restaurant getting so thoroughly slammed on its second night open. Our waiter explained the menu, which was not too complex. There is a small selection of salads and soups ranging in price from $7.50 to $15. It was way too hot out for soup, so we chose a couple of light salads; one with roasted beets, grapefruit, cumin, herbed yogurt, and a confit of lemons and raisins, and the other an asparagus salad with a poached egg and bacon. Both were very big successes

Of course, Mussel Bar has moules frites and are all $16. The mussels are all “Blue Bay” Prince Edward Island mussels, which is what you would expect. There are also some wood-fired tarts, which are basically flatbreads/pizzas, and some sandwiches. If you're looking for something on the larger side, there are three entrees including a short rib bolognese pappardelle available in a full or half portion, a grilled strip steak, and a grilled Atlantic salmon. that range in price from $22 to $24.

We figured getting anything other than mussels on our first visit would be criminal, so Amy and I both ordered our own. Amy beat me to ordering the wild 'shroom preparation with pancetta, Parmesan, and truffle cream, so I went with the "classic" mussels with garlic, shallot and white wine broth. The staff deliver the mussels in piping hot cast iron pans. Upon placing them on the dining table, the staff took the covers off the pans and oh, man, it smelled so good. We took deep breaths and then dug in. I was loving the "classic" mussels I had ordered, but after trying Amy's 'shroom mussels, mine just seemed outright bland. I think the added touch of truffle is really what made them stand out.

The mussels themselves were cooked well, but my only complaint is that there were a good deal of mussels with a tiny amount of meat inside. The frites were very crispy and made for good dipping in the mussel broth as we ate. Although, I would not say the frites are classic frites that follow the fry and bake cooking approach, but thought they were delicious.

We skipped dessert because we were full, and the dessert selection is not especially tempting. You have a choice of vanilla or chocolate ice cream and a vanilla creme brulee. While Amy is a big fan of creme brulee, she was way too full to eat anymore.

Overall, our first visit to Mussel Bar was very successful and we'll definitely be going back. I only hope that things calm down a bit in the coming months and the wait goes down. If the wait scares you, you probably want to get there on the very early side, or try a weeknight (although not Monday night -- they're closed).

Unless you're talking about a rare beer -- and it doesn't look like you are -- $13 a glass is a bit on the pricey side. Hats off to the no-Bud Light policy, though. I hope that the bartender took the opportunity to expose the guy to a better beer.

It was a very good beer, perfect for summer, but yes, way to expensive for one beer.

YAY! Glad to see a new review from you, Jason!

Great concept for a restaurant and the mussles were cooked perfectly, but the sauce was disappointing. I ordered the wild 'shroom, pancetta, Parmesan, and truffle cream. The pancetta was delish, but I couldn't taste the truffle oil in this dish. Without the pancetta, this bland dish would have been even more bland. I also tried the 3 dipping sauces for the frites and was not remotely impressed. I don't plan to go back unless a friend insists upon eating there.

I saw a tweet from Amy about an endless wait for a table and I just knew this is where you were. We tried to go last week and it was an hour wait at 6 pm. We left b/c we had the child with us. We want to go back though.

This place is not worth the wait. Service is terrible-- the waitress took forever to get our drink orders out and by that I mean 30 minutes for HALF of our drink orders; the other half came about 15 minutes later. Maybe the bartender was slow in getting the drinks out, maybe she was overwhelmed/weeded.... regardless she didn't acknowledge we were there for at least 15 minutes and we should have just left but we wanted to give the place a chance. If Wiedemaier is going to charge $22 for an albeit excellent beer, he'd better have service to match.