Must Haves: A Well Dressed Burrito 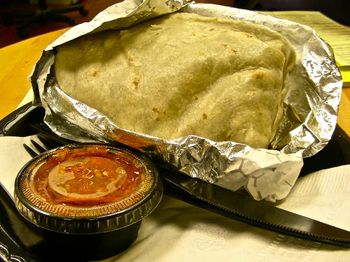 Must Haves focuses on some of D.C's best dishes.

It's a burrito joint, so the penguin is confusing. The location -- down an alley by Rumors -- isn't great, either.

Fortunately none of that matters because the burrito that you came for is what you came for. The Well Dressed Burrito's marinated burrito is one of the best you'll find in the District.

You either know this or you should.

It's not hard to find a burrito in D.C. There are the fast food options, like Chipotle, Taco Bell and Qdoba, but they're not that good. Despite the lines that wind their way through Chipotle, the weighty burritos are bloated bundles of rice. Taco Bell always seems like a great idea on road trips (when choices are few), but when you have options the allure of the Burrito Supreme fades fast. And Qdoba and the rest of the fast food options are cranking out crap for the hurried masses.

So you hop the Metro to Dupont and wander down an alley for what you know will be right. Between 11:30 and 1 p.m., the cramped space is as crowded as an Orange Line train. There are specials, like salmon quesadias and Mexican bread pudding, but you're there for the real specialty. You're there for a marinated burrito. 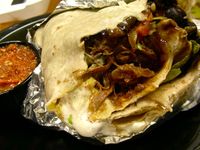 Beef or chicken (there's a vegetarian option, but who cares) marinated in a "seasoned Mexican sauce," swaddled in a four tortilla and surrounded by black or refried beans, lettuce, Mexican rice, shredded cheese, sour cream and tomatoes. You ask for the hot salsa, thick with bits of peppers and spices.

You could get a fajita-style grilled burrito instead. For a moment you're tempted. You think that it'll be like a marinated burrito, but better because it's grilled. Then you remember the last time you ordered one and realized the meat isn't marinated, so the magic was missing.

No, you stick with the marinated burrito. Order beef or chicken, it doesn't matter because both a fantastic. You ask for it with black beans, because you know if you say nothing it will come with refried beans. Glancing at the beverage cooler, you wish there was a cold bottle of Hatuey waiting for you, but you settle for a Snapple.

Three minutes later, someone behind the cramped counter that keeps the crowd at bay calls your number. It's time to make a choice: do you shoulder your way back through the interns and office workers for one of the few seats among the filing cabinets, or do you tuck that fat baby under your arm and head to the circle for lunch on the lawn?

Doesn't matter, because it's the burrito that matters now. It's big, but unlike the popular Chipotle burrito, this well-dressed one has flavor. The mingling of marinated meat, beans and cheese may not be the most authentic burrito (you can head up to Columbia Heights for that), but it's the best thing you've eaten all week. It takes three bites to go left to right, but the deep, savory flavors and pinch of heat from the salsa help you make short work of the hefty lunch.

Sure you should've had a salad instead. You're pretty sure the dapper penguin's salads are good, but you've never had one. Come to think of it, you've never had anything else one the Well Dressed menu.

Why would you have? You're there for the marinated burrito.

I have been meaning to try it for my burrito roundup. After reading your review, I think I must sooner than later.