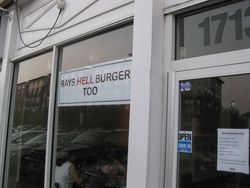 Local beef Impresario Michael Landrum has been a busy man of late. Hot on the heals of opening Ray's The Steaks East River, Landrum has done a whirlwind overhaul of one of his Ray's Hell Burger locations in Arlington, re-dubbing it "Ray's Hell Burger Too." Of course, everyone knew he was going to do something with the space, but I hadn't heard anything about the launch until this Thrillist article hit my inbox the Friday before last. Some friends and I popped around that evening, in the hopes that it flew under everyone else's radar, as well.

Ray's Hell has become the go-to gourmet burger location in the DC area since opening in July 2008. Their fresh-trimmed, hand-ground 10 oz burgers and myriad decadent toppings have become a favorite of burger fiends inside the beltway. Despite some brilliant press and some high-profile, repeat customers, NOVA's premier gourmet burger bar has had its share of detractors and complaints. Ray's Hell Too, it seems, is an attempt to address those most frequently voiced quibbles. A sign they'd taped to the front door summed it up nicely: 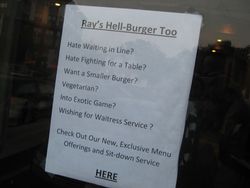 Check Out our New, Exclusive Menu
Offerings and Sit-down Service

Not mentioned above is the oft lamented lack of booze, which was also purportedly remedied. This, plus the lack of a smaller option were always my greatest complaints, so I was pretty psyched. 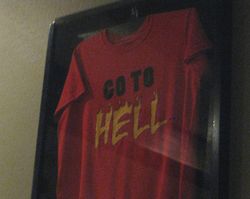 The restaurant is set up much like the old Ray's The Steaks location, with forty or so tops jammed into a tight, sparsely decorated space, with an open kitchen off to the back. Where the old Ray's had a touch of class with its open wine racks and wood floors, Ray's Too is all linoleum and cheap paneling, with neon Coke coolers and framed T-Shirts telling us to "Go To Hell." But then, it is a burger joint -- just don't go expecting the Ritz here. 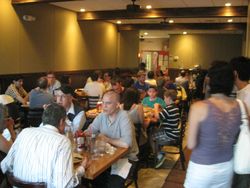 While none of the diners seemed crowded or put upon, the waiting area is a bit on the small side. We crowded into the 6 by 4 foot vestibule with a few other wannabe patrons, until we overflowed and started a line against the wall. There is no host or host stand, but a competent waitress was quick to give us menus, take our head counts, and give us some time estimates. Once our party was fully formed we were seated very quickly, which was impressive on such a busy night -- can never say a Ray's doesn't know how to flip tables!

The new menu offers the same beef behemoths as always, along with some new points of interest: Vegetarians finally have an option in the form of a 1/3 lb veggie burger, and lovers of more exotic fair will be tempted by the fruit glazed venison burger, or the 'Hanoi Style' wild boar burger. The real draw is still the classic, now also available in the more modest 1/3 lb form, cleverly dubbed the "Lil Devil," for $6.99 plus toppings. 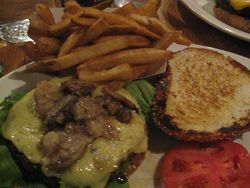 The wait would prove to be the most well orchestrated portion of our evening, as from here, organization flew out the window. Our server was very sweet, but had almost no idea what was going on concerning the menu or otherwise. When asked about the new Hanoi burger, which is only vaguely described on the menu, she had nothing to offer in the way of description. Ray's had yet to draw up a drink list, and we got very different opinions on what it actually contained, depending on who we asked. I don't know whether to blame lack of time for training, last minute changes, or what, but if we hadn't already been well acquainted with the original concept, we would have been lost.

As best I can tell, Ray's offers Bud Light, Bell's Two Hearted Ale, and Delirium Tremens by the 12 oz bottle -- strange selections for such a tiny list, as each of these occupies some sort of fringe in the wide world of beer. Baby bottles of Beringer Merlot and Cabernet were also served, along with Pinot Grigio, which was already out of stock. We were told that all drinks were $4.00 a piece, making the Tremens a tremendous deal (if you like that sort of thing), and the Budwater a terrible ripoff. The drinks were a long time in coming, and were then unceremoniously dumped on the table, sans glasses, with the soft drink bottles not even opened. I know I'm not the bloody Duchess of Kent or anything, but come on... 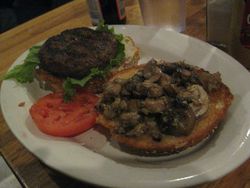 We'd all ordered incarnations of the "Lil Devil," which arrived in various states, ranging from overcooked to underdone. As often happens when given too many options, I panicked, and ordered my burger with what some may call a revolting combination of bone marrow and cave aged cheddar. It didn't work at all -- which I admit is totally my fault -- and I was very disappointed to find my "rare" burger just a hair under medium. Eliza ordered more sensibly, opting for the always delicious sherry and brandy sauteed mushrooms (a longtime staple at Ray's The Steaks), but her's, too, was about one shade too brown.

Worst of all, one of our companions ordered the boar, which came out underdone! He made a terrible face when he tried it, and voiced his concerns. Unfamiliar with ground boar, we all thought that maybe it was supposed to be a little pink, but the texture was undeniably gummy and unpleasant. The waitress was less concerned than I would have hoped that they'd served us raw pork, but did take it away and fire a new on 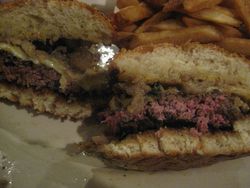 e. In the interim, we were offhandedly informed that we would not be allowed to order any more drinks, as they were running low, which at that point was pretty much cool by all involved. The bill came to about $74.00, which included five burgers, several sides of fries, our beers, and truffled mac and cheese.

I know its not fair to judge a restaurant on its first week, much less on what might have been its opening day. But folks, this ain't remotely Michael Landrum's first rodeo, and this isn't even really a new restaurant, so much as a new concept shoehorned into an old space. Landrum knows how to open a restaurant, which makes our disappointing experience all the more puzzling. 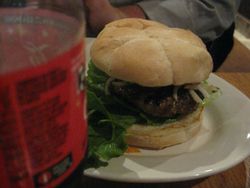 Since our visit, we've talked to a couple friends who have been since the renovation, and they had a pretty good time, so hopefully things are settling in. I'm hoping that our experience was just an isolated event, or that matters have much improved by now. So I throw it out to you -- have any of you guys been? If so, I'd love to hear your thoughts.

I also visited Ray's Too shortly after it opened and was likewise disappointed. Our smaller burgers came out overdone (probably a result of grillmasters used to cooking 8-ouncers rather than 6) and the venison burger was fine, but not what I was expecting for the price. The duck fat fries were horrible - limp, mushy, and greasy. The onion rings were excellent, however. I plan to stick to the original Hell Burgers.