Home Archives About Facebook Twitter Instagram
Grilled Quail and Beer by Ferran Adria (hint: one is better than the other)
The Food Truck Debate: One More Day to Have Your Say on 24 DCMR 5 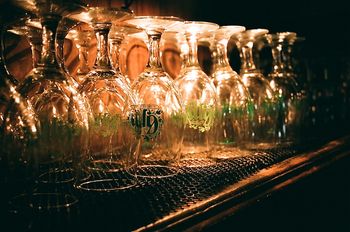 Every bar is the same: four walls, one roof and booze to drink. What differentiates one from another, importantly, is the atmosphere inside.

A good bar will have a good atmosphere. The beer, the liquor, the food, all that's secondary. The people around you and the people serving you will determine whether you stay or you go.

Then again, sometimes you go because you're an idiot.

Halloween 2008, my buddy Columbo and I walked up to Dr. Granville Moore's from my old apartment on Capitol Hill. The Belgian restaurant looked as it always does: the low ceilings of exposed timber, the knotty wood bar backed by elegant beer cabinets and chalkboards advertising food specials and beer. Amongst it all was a hive of people feasting on mussels and emptying glasses of golden ales and Flemish reds.

What I remember most, though, was our bartender. Decked out in a little pink cowgirl hat and little jean shorts, she asked if we liked whiskey. We said "Yes ma'am," unhesitatingly. With that, the three of us and a waiter hanging out behind the bar shared a round of American bourbon ... gratis.

I loved it. A generous moment with strangers, free whiskey, and those short shorts. Man, those short shorts. Without a doubt, it was the highlight of the evening. Then we made the biggest mistake of the night, we left. The night was too young, so after a few beers and food, we decided to check out a couple other places. Nothing was as good. We peaked early and the rest of the night was a slow let down.

On a recent Saturday night, my wife and I stopped in for a beer. The hectic energy of the Halloween night was replaced by families and twenty-somethings drinking quads and dining on the signature mussels and fries. We sat at the downstairs bar between a couple guys pouring over pints and a punch bowl of fries, and a 10-year-old girl and her family having dinner.

Both nights were great.

I know I rant about families and food in bars. I still prefer my drinking establishments to be drinking establishments, not family-friendly eateries. But this is what a pub looks like in Europe, at least the ones I've visited. The Belgian gastropub may have been designed with New Orleans in mind, but the creaky floors, tight spaces and dim lighting give the H Street restaurant an appropriately older feel. It may be in Northeast, but it feels like Antwerp.

Again, that's just the trappings. Disney can get the trappings right. What seals it for Granville Moore's is the people on either side of the bar. Three years in, the place remains one of the most popular destinations along the increasingly crowded Atlas corridor. Certainly, some of the folks filling the booths and bar stools are tourists and Food Network fans hoping for a pot of Chef Teddy Folkman's (left) blue cheese mussels and maybe a glimpse of the man himself. But the rest, the bulk, are a healthy mix of neighborhood regulars and beer enthusiasts.

Assisting them all is a hurried group of servers and bartenders who are happy to take the time to sherpa you through the beer list, steering the wary toward the safe (Stella Artois) or the adventurous toward something new (St. Louis Gueuze), all the while getting jostled in their tight confines.

Clearly, there are a lot of places to spend your money on Trappist ales and croque monsieur, but there's no better place to do so than Dr. Granville Moore's. This is a bit if a surprise if you consider that with the exception of Marvin, it's the only Belgian restaurant that isn't owned or affiliated with someone from Belgium. Yet, it's easily the best Belgian beer bar of the lot.

Joe Englert is a prolific bar and restaurant owner, who's responsible for several places along H Street, including The Argonaut, Palace of Wonders, The Rock and Roll Hotel, The Red and the Black, The Pug, Sticky Rice, and the H Street Country Club.

Englert's managing partner in Granville Moore's, Chris Surrusco, built the original beer list and recruited his college buddy, Teddy Folkman, who was running the kitchen at Balducci's and had no experience with Belgian cuisine.

Keeping the theme going, Granville Moore's new beverage director, Matt LeBarron (sitting next to Teddy), grew up in Annapolis working in his parents' butcher shop. Aside from talking his father into stocking a few Belgian beers, LeBarron had no experience with Belgian beer before Granville Moore's. After working as a host and server for six months, LeBarron was given the keys to the beer cabinets and told to update the beverage program.

If you know anything about Belgian beer, you know that developing a beer list can be difficult. First, most people don't know much about Belgian beer. Second, there are hundreds of styles of beers produced by hundreds of breweries in a country about the size of Maryland. Add to that the growing number of American craft breweries that make Belgian-style beers and you have and bewildering variety of beers to build a list from.

So far, LeBarron's approach is to keep the core list of 40 or so bottles intact, keep the seven taps rotating at a break-neck pace (with the exception of Stella, the beers change multiple times per week) and add more than a dozen 750ml bottles and branch out into French ciders and meads. In the next several months, he hopes to double the bottle selection (a daunting challenge seeing that he already stores cases of beer in the dining room). LeBarron has instituted training classes for the staff and he's hosting beer dinners that bring Folkman out of the tiny kitchen and into the crowded dining room.

Above all else, though, LeBarron's job is to keep the customers happy. Case in point: if you don't like your beer, you can send it back, even the wine-bottle sized 750s. This doesn't mean much if you're dealing with a $3 Coors, but when it's a $16 Rochefort that's a nice touch. LeBarron said he'd rather replace the beer and eat the cost then have someone go away unhappy. And the thing about Belgian beers, it's easy to drop $20 on a beer you'll hate.

For example, just because you like the sweet clove flavors of a Delirium Tremens doesn't mean you'll enjoy the face-puckering qualities of a Monk's Café Flemish Sour. A Poperings Hommel farmhouse ale might look like a Gouden Carolus tripel, but it sure doesn't taste like it.

To minimize the buybacks, LeBarron and the bartenders will warn customers about what to expect, especially if someone is transitioning from a pint of Hoegaarden to a bottle of Duchesse de Bourgogne (they're very different). But if it's a sour you want, it's a sour you'll get.

Despite the complexity of Belgian beers and the proliferation of American craft beer bars in the area, Belgian restaurants are as popular as ever. On weekends, you can still face an hour wait for a table at Granville Moore's. Robert Wiedmaier, who opened the Belgian-themed Brasserie Beck in 2007, is drawing crowds to his newly opened Mussel Bar in Bethesda.

Folkman chalks up the popularity to the fact that the District is a city of transplants, many of whom are open to new experiences. D.C. residents are also a traveling bunch, so it's not unusual for someone to come into Granville Moore's looking for a beer or a meal they enjoyed in Brussels.

Whatever the reason, places like Granville Moore's and Belga Café set the stage for the American craft beer craze now thriving in D.C. Belgian beer gave us a foundation to build on, an identity. As with any trend, craft beer and Belgian beer will eventually surrender the floor to the next big thing. When that time comes, it will be the quality of the service, the loyalty of the regulars, the atmosphere that will keep a place like Granville Moore's alive.

As long as Folkman and LeBarron keep doing what they're doing, Granville Moore's will be just fine.

That's not to say there aren't a few things to nit pick.

First, LeBarron does need to expand the beer list. What they have is good, but with so many Belgian beers available, the list could be many times larger. I'm not suggesting adding 200 labels, but LeBarron needs to find room for another 40 to 60, even if that means Englert rents them some off-site storage. That would put them in the same range as Brasserie Beck, arguably their chief rival.

That expansion could include a few more Belgian-style beers made here in the states. Had LeBarron kept the beer list Belgian only, I'd be fine with it being Belgian only. But he opened it up to the Americans, so he should take the opportunity to further explore what's available. The handful of American offerings seems unduly small. Organizing them on their own beer list or chalkboard would also help customers differentiate between what's made in Belgium and what's inspired by Belgium.

And how about some signage out front? Obviously, Granville Moore's doesn't have a problem drawing customers, but I've walked by that beige row house numerous times without realizing it. I now use The Pug next door to let me know when I've arrived. I'm all for preserving Dr. Moore's legacy, but I think he'd be fine with dangling a shingle out front.

(Bonus!: New to Belgian beer and not sure what to order at Granville Moore's? LeBarron says you should consider a Houblon, a hoppy triple that he describes as "Belgian candy," a Saison Dupont, a cloudy gold farmhouse ale with a crisp, dry flavor, or the malty and robust Maredsous 8. If you don't like one of these, you don't like Belgian beer.)

I'm glad you appreciate whiskey and MY short shorts.... ;-)

People, go to this bar.

And yeah, mine is a good gig.