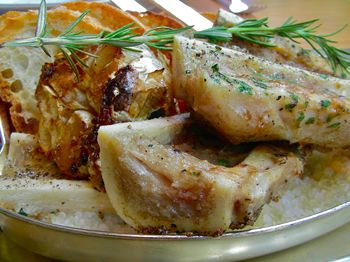 Last year, I predicted 2010 would be the year of offal. I was wrong. This has clearly been the year of cupcakes (really?) and food trucks.

I was on to something, though. Trotters have made their way onto charcuterie boards around the city, sweetbreads and foie gras are as popular as ever, and even my mother knows Chris Cosentino (though from his role on Chefs vs. City, not his evangelizing about offal, but still).

So it's no surprise (well, a little surprising) that something as primitive, as ethnic, as absolutely fantastic as bone marrow has made its way into the tony spaces of Blue Duck Tavern. 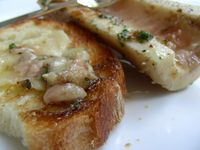 Let's get this out of the way: cooked bone marrow looks like hell. If I were honest, it looks like a warm loogie. But the taste. Oh my, the taste. Some have described it as meat butter. That works for me. Bone marrow that's had time in the oven or a sauce is wonderfully rich and savory. It's the Cracker Jack treat in ossobuco, the poor man's foie gras.

Whoever dreamed up the bone marrow appetizer at Blue Duck deserves a raise (and whoever took the ribeye with bone marrow sauce off the menu should be out on their ass). It's the only appetizer I've ever had that has dictated a return visit. Chef Brian McBride has put together an elegant American menu and I enjoy the nods to the purveyors his ingredients. The restaurant is beautiful, the staff is excellent and the bartenders make a good Negroni.

It's a complete contrast. The kitchen roasts two split bones until the bone marrow is rendered into a soft gelatinous state and serves it on a silver tray with a head of roasted garlic and a tiny coke spoon perfect for scooping. Despite the trappings, there's something inelegant about scooping warm bone tissue onto toast points. However, with bone marrow this is as nice as it gets.

The bone butter is wildly popular with other cultures, particularly in Asia. That's why Indian restaurants rough chop the bones in their dishes. The cooked marrow flavors their sauces and diners enjoy sucking the remnants out of nature's stiff straw. Sitting along the windows in Blue Duck's sunny lounge watching the West End go by, I can't imagine giving felatio to a femur, but if that was the way McBride served it ...

The offal revolution may have lost out to two chicks and a pastry, but as long as roasted bone marrow resides on Blue Duck's menu I will be perfectly happy being wrong.

I have dreams of this appetizer. Absolutely amazing

wow. and the roasted garlic that comes with it? heaven on a plate.

You can make this at home and it is better. As a huge marrow fan, I was disappointed

justbreathe, I identify - I didn't love it.