Must Haves: Capital Q's Barbecue Burrito - It's Not A Taco! 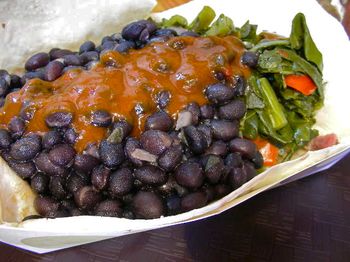 Sometimes, a clever twist can make a good dish great. Sometimes the right packaging can do the trick.

Take Capital Q in Chinatown. They make good barbecue. Not great barbecue, but good barbecue. Nevertheless, with a Subway next door and a Fuddruckers across the street, the tiny Texas barbecue joint is easily one of the best places to eat in the neighborhood.

Even with good barbecue, though, Capital Q has a great barbecue dish: the barbecue burrito.

You won't find it on the menu. Instead, you order a "taco." I say "taco" because the "taco" is a 12 inch flour tortilla, which makes the "taco" a "burrito," and I really like burritos. (I was honestly pissed off for a while after realizing the taco I routinely passed up was actually a burrito. What the fuck? Just call it a burrito.) 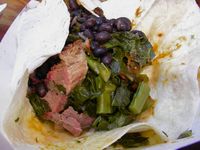 Within that burrito you can have anything. Beef brisket and black beans wrapped in a warm flour tortilla? Done. Pulled pork, collard greens and corn salad? Done. Smoked turkey, mashed potatoes and banana pudding? Sure, but don't.

The point is, I can walk in anytime and order a burrito stuffed with all kinds of barbecue. And if that ain't great, I don't know what is.

Now, there's another trick to this. The guys working the counter at Capital Q are generous. If you order a pulled pork burrito with black beans, greens and hot sauce (as I often do), you'll have a mound of food piled on your tortilla. Picking it up will be out of the question, and if you're using a fork and knife you're missing the point. So the trick is to order everything on the side, including the sauce (and if you're smart, a second tortilla - you'll have plenty to fill both).

With your tray of sides and meat, grab a seat and a roll of paper towels at the front window and build your burrito(s). As you stuff that soft bundle of barbecue into your mouth you can watch the tourists jaywalk their way into Fuddruckers. Suckers.

Thanks for the inside scoop, I used to work just down the street and have passed by that spot a million times, next time I'll try it out!

My mouth is already watering... I'm all over this one. I'm down there weekly anyway, but I may make a special trip. Thanks for the tip!

That is most definitely not a taco. its too big to be a taco! That thing is ginormous!