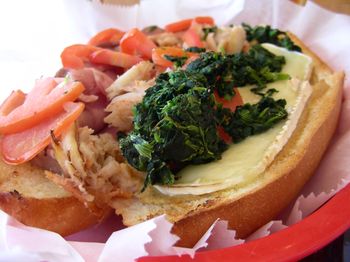 The name alone is enticing enough to order the sandwich. There is nothing, absolutely nothing, bad about the idea of eating beef and seafood (screw peas and carrots, this is the perfect pairing). These days, the classic high-end meal has been replaced by fussy tasting menus and foamed foie gras, but in our great steak houses surf and turf remains a throw-back luxury. Let's face it, if you're ordering The Palm's 24 ounce rib eye with a side of lobster tail, things are going well for you. 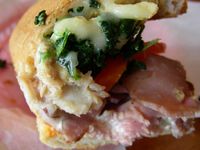 The Lost Dog's take on the surf and turf is nearly as good at a fraction of the price. The steak is replaced by roast beef and lump crab meat fills in for the lobster, but we're still talking about a roast beef and lump crab meat sandwich. Lost Dog tops the whole thing with a plank of brie, and I always tack on spinach and tomatoes (I like spinach and tomatoes, and the vegetables makes me feel better about the brie and mayo ... and waffle fries).

The sandwich is then rolled though the oven so it shows up hot and crusty. A liberal dousing of Tabasco and I'm good to go.

The Lost Dog has 52 sandwiches, 31 pizzas, 13 salads and a handful of soups and appetizers on its crowded menu. In the dozen years I've been going to Lost Dog, I've covered much of the menu and most of it's good (cheese pizzas and veggie sandwiches just don't do it for me). But from the many, I have found the one: the Surf 'N Turf sandwich.

(While you're there, order a beer with your Surf 'N Turf. After all, the Lost Dog is one of D.C.'s best beer bars.)