Local Players on the Oktoberfest Scene 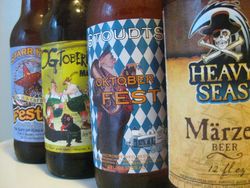 (Note: You'll have to excuse me, reader, for the occasional lapse in focus, as I am writing this article during the NFL season opener).

Ah, Autumn! Besides a break from the relentless heat, and the beginning of God's own field game, the Fall also heralds the release of some of the year's best beers: Das Oktoberfestbiers! Though release dates are pushed back annually, (with some being forced out as early as mid-August,) the weather has just taken a turn for the chilly, so I may finally indulge in my favorite beers of the year in their proper context.

I love these beers. Most are made in the Marzen style, a traditional German type of beer which is simultaneously rich, malty, crisp, drinkable, and ... OAHH! Favre is down!! Get up Grandpa! You can do it!!

So being the polar opposite of a "Hophead," these sort of beers are right up my alley; the only hitch is most come from so far away! Just thinking about all that gasoline it takes to get my favorite Munich classics the 4000 some-odd miles from Bavaria to the grocery store shelves makes me a little ill. Thanks to the American Craft Brew Revolution, though, I'm glad to say we've now got plenty of home-grown options, many from within about 100 miles. Though very similar, each is as precious and individual as a snowflake; and nearly as fleeting! As follows are a few of my favorite local offerings, available for a limited time only at a store near you, for about $9 to $12 a sixer! Palate: Dry grains and malt dominate the front, along with some vanilla and caramel. Vivid effervescence gives a quite dry and pleasingly biting. Medium bodied, and vaguely creamy. More echos of red fruit on the mid-palate lead to a very dry, nutty finish.

Overall: Surprisingly complex and dry for the style, but possessed of all the elements of a great Marzen. Flying Dog does not produce a lot of beers I enjoy; this one is a pleasant outlier, and possibly my favorite of this lineup. Go out and grab it! 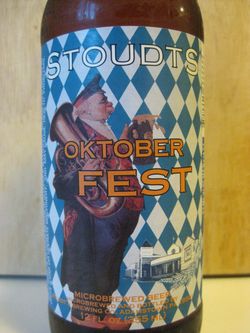 Appearance: Dark gold, with a slight red hue, and a short, off-white head.

Nose: Very dry and malty, with faint hints of roasted nuts and yeast.

Palate: Sweet malt leads the way on this light bodied, mildly effervescent lager. Corny flavors persist on the rather dry mid-palate, along with the surprising flavor of banana. Pleasing uptick of dark sugar sweetness on the finish.

Overall: Middle of the road and traditional. Not gonna blow your head off, but the sweetness will be comforting as the nights get cooler, and its mild texture makes this a great session beer. 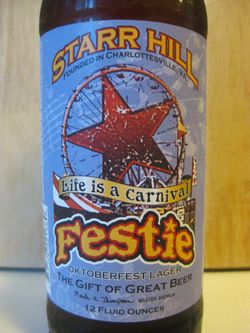 Nose: Light, sweet and wheaty, with a slightly green grassy note, and some dark berries.

Palate: Bright and malty on the front; medium bodied, and relatively dry. Finish is dry, rather sharp for the style, with an almost mineralic quality.

Overall: Simple, but a great example of the more aggressive and dry side of the style. A solid pick for the fan of your more effervescent Czech pilseners, whose looking for a bit of nutty richness to ring in the season. 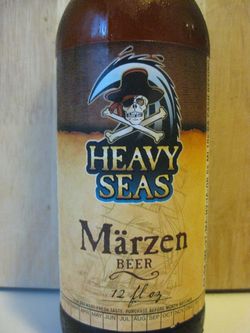 Nose: Light notes of brown sugar, yeast, and some spice.

Palate: Rather sweet on the attack, giving way to cinnamon and malted grains on the weighty mid-palate. More brown sugar sweetness lingering on the finish of this hefty dark lager.Overall: This replacement for the old Clipper City "Balto-Marzhon" is a good pick for those looking for a heavier, sweeter offering. Though typical of the Oktoberfest/Marzen style, this one is actually a year-round offering from Clipper City, so live it up!

Flying dog is really growing on me. If you're up for an adventure, grab a Nitrogen pour of the Double Dog (hefty at 11.5%) at galaxy Hut while they still have some. I'm coming around to the Snake Bite IPA, too, and I tend to enjoy almost all of their beers on tap (with a special nod going to the raging Bitch for being extra good on tap)