A Trip to St. Michaels: Local Beer and Wine on Maryland's Eastern Shore 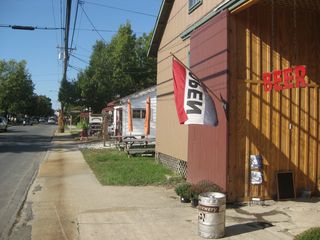 After a long and arduous summer of work and family obligations, Eliza and I found ourselves with an oh-so-rare free weekend recently. On an only moderately planned "whim" (which is as whimmy as we get these days), we took a trip to St. Michaels, a small resort community on Maryland's Eastern Shore, or, the Riviera of the Chesapeake! Or something! Located about an hour's drive down the shore from Annapolis, St. Michaels has all the trappings of your usual sleepy bay-side tourist town; antique shops, cafes, purveyors of $200 critter pants and... a winery and a microbrewery? Hells yes, they do. 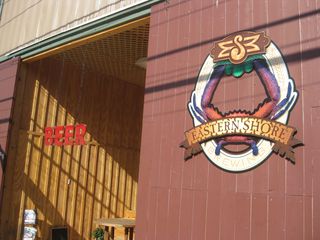 On Route 33, right at the beginning of town in the "Old Mill Complex" reside St. Michaels Winery and Eastern Shore Brewing. Though unaffiliated, the two work in tandem as the perfect one-stop-shop for the vacationing lover of local fermented treats. Sticking by the old axiom "Beer before Wine, your Feeling Fine; Wine before Beer, towards This you Shouldn't Steer," we visited the latter first.

It's no coincidence that these two establishments find themselves so close together; Adrian and Lori Moritz, avid homebrewers from upstate NY, founded the Eastern Shore Brewing right next door to the young winery in 2008, rightfully thinking it a perfect complement. Using their two sizable fermenters, Eastern Shore puts out about 450 gallons of beer every 10 days, according to The Star Democrat. 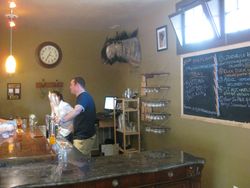 The tasting room is an unpretentious, sparsely furnished space featuring an eclectic selection of tables and seats, and, why not, a number of trophy animal heads. The wood and marble bar featured five brews on draught for sampling: The Lighthause Ale, Duck Duck Goose Porter, Magic Hefeweizen, St. Michaels Ale, and Knot-So Pale Ale IPA. $8.95 gets you a five ounce pour of each of the beers, which equates to a little over two full beers, which ain't too shabby. 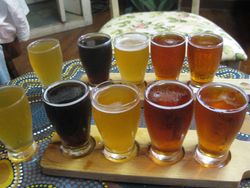 All in all, the beers tasted of pretty high quality, with a propensity towards cleaner, crisper, dryer flavors. The St. Michaels Ale (which, unbeknownst to me, I had sampled earlier at a local crab smashery) is a fantastic session beer with low alcohol (5.2%), and just a hint of hops. The Magic Hefe, though not my bushel of 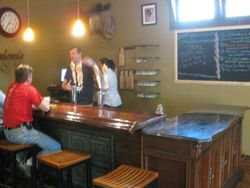 crabs, is a great example of the style, with just the right amount of banana and yeasty flavors. Far and away the best of the bunch was the Porter, which had a classic British porter texture, a hint of hops, a slight note of burnt coffee, and a pleasing, dry finish. This is just the perfect local brew to have in oyster country.

Unfortunately, licensing does not allow Eastern Shore to sell by the pint -- they do, however, sell all their beers by the six-pack, and will gladly let you pick and choose your sampler, even to include 5 pours of the same. Though production on this stuff is far too low to make it to this area, the barman told me they sell heavily up and down the shore and have recently made inroads across the bridge, so who knows what the future holds? 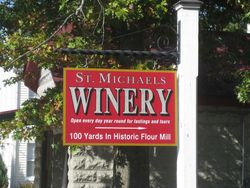 A quick stumble behind the brewery is St. Michaels Winery. Founded in 2005, the winery uses a combination of local and Cali grown grapes, which they vinify on premise into a staggering number of wines -- 19 in total were available the day we visited! 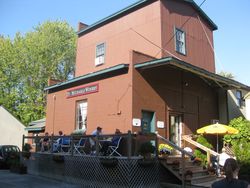 The big, barn-like structure houses a small four-seater bar and a half dozen or so tables, situated in a quaint, high-ceilinged, nautically themed room. Though it took a bit longer than we would have liked to be seated, the staff was lovely, and the wait gave us plenty of time to plan our tastings. As I said before, St. Michaels has almost 20 wines available to try, ranging from well-known French varietals like Pinot Grigio and Syrah, to more obscure native varietals and hybrids like Niagra, Seyval and Concord. Unlike some wineries I have visited, they make it pretty simple for you, offering up everything for $1 a taste. 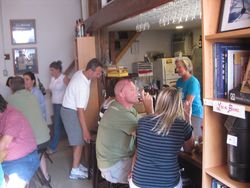 My experience with Maryland wines, previously limited to a handful of fruit wines, was greatly expanded that day, and what I found was generally pleasant. The 2007 Chenin Blanc -- made from grapes from Lodi, California -- had some nice floral notes, and ample acidity. The Sangiovese, made from local grapes, was also amply acidic, with the high 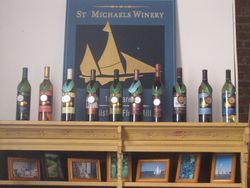 cherry notes of a light Chianti. We brought home a bottle of 2007 Sauvignon Blanc, which had great balance, and pleasing, tropical fruit notes. I wish I had had a chance to try more of the native grape wines, but what we had were generally quite good. Prices were pretty high at $16 to $35 a bottle, but that is not unexpected of a small winery that, because of Maryland's draconian wine-shipping laws, must rely almost exclusively on on-site purchases. 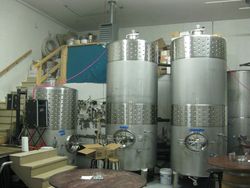 An interesting side note on both locations is that they were MUCH more free and open with their production space that any other brewery or winery I have ever visited. Eastern Shore's brewing tanks are right there to see and touch, and the winery staff were more than happy for their patrons to wander about their facilities, completely unsupervised! Maybe its a function of looser health codes, but I like to believe it is indicative of the laid back, relaxed atmosphere of the place. The Eastern Shore is a beautiful place to spend a long weekend, particularly for that leisurely attitude. Though I don't think Eastern Shore Brewery and St. Michaels constitute in and of themselves enough to draw a visit, they certainly make for a fun stop while you're there.

My wife and I were just there earlier this week (Oct 11-13) and visited the winery's tasting room. We liked it so much we brought back a mix of 16 bottles! I was impressed at the quality of the wines. We arrived at 4:30pm and it was still doing good business.

Rob- thanks for the great write up on the brewery and winery! Shella and I, owners of the shop Ophiuroidea, are extremely happy about our neighbors and their recent awards in the beer and wine competitions across the state! We hope that you also stumbled across our shop in the Old Mill area, too, of course being between the Brewery and Winery is a great place to be, indeed! We direct newbees all the time to both locations! Cheers! Kim Hannon, owner, Ophiuroidea