Home Archives About Facebook Twitter Instagram
A Trip to St. Michaels: Local Beer and Wine on Maryland's Eastern Shore
Pumpkin Liqueur for Halloween Fun Times!; or, How I Failed at Pumpkin Juicing. 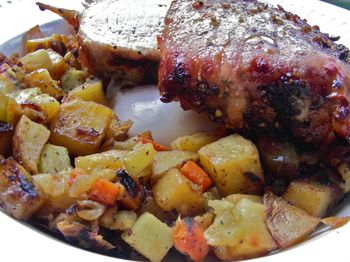 Whoever decided that Labor Day marks the end of the "grilling season" has never stood in front of a warm Weber on a crisp fall afternoon. Between the football and the drop in temperatures, fall is a fantastic time of year to cook outdoors.

The change in seasons also changes what I like to grill. The fish, shrimp and seafood that grill in the summer is replaced by lamb, pork and heartier cuts of meat. Roasted tomatoes and young garlic are replaced by sauteed brussel sprouts, and roasted turnips and potatoes. Despite the fact that my house has central heat, I plan meals like I have to stay warm in a yurt.

Much of this is due to the fact that vegetables like tomatoes are no longer in season, while brussel sprouts are just coming on. But I can get either product all year. No, the real reason is the trigger the weather flips. I no more want shepherd's pie in August as I want ceviche in February.

That being said, pork tenderloin is my meat of all seasons. It's easy to cook, flavorful as hell and a relatively cheap cut of meat. A few years ago, when my wife and I lived in North Carolina, a lot of pork tenderloin moved through our little Chapel Hill apartment. She was going to grad school and I was working a couple jobs to help make that happen, so a four pound tenderloin that could feed us for several days was a household favorite. 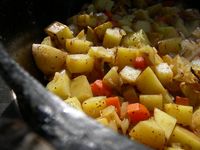 Now that we're into the fall, I like to pair the tenderloin with a seasonal hash of carrots, apples, onions and potatoes. You could even swap out the potatoes for squash or pumpkin, or just add it to the mix. I also add a bit of bacon to punch up the flavor and because I like bacon. A poached egg works real well, too.

To go with the dish, I like brown ales and dark beers. Honestly though, any fall seasonal would work. We've moved from the light, refreshing pilsners and pale lagers of summer to the darker, richer beers better suited for fall and winter.

In fact, I've been sitting on the bottle of Autumn Maple from The Bruery that I picked up in August. I bought it with this post in mind, but it was also just too damn hot at the time. Who wants a sweet, malty high alcohol (10.5%) beer when it's 96 degrees outside? Screw that and pass the hefeweizen.

To make this Belgian-style dark ale, the Placentia, Ca., brewery uses yams - lots of yams - molasses and spices, including cinnamon, nutmeg and allspice. The result is deeply rich, spicy ale that's just a bit sour and more than a bit sweet. 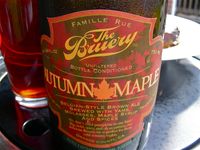 If you can't find a bottle of Autumn Maple or just want to try something else, grab a six pack of Sierra Nevada's Tumbler brown ale. The craft brewing community has gone wild for big, hoppy India Pale Ales during the past few years, but Tumbler shows that the heavy weights of craft beer do other styles of beer just as well (that said, Sierra Nevada's Tornado Extra India Pale Ale is an outstanding hoppy beer).

So grab a coat and get outside, there's grilling to be done. 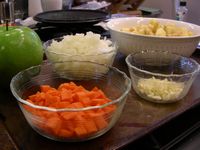 Generously season the tenderloin with salt and pepper, and set aside while you prepare the grill. For this recipe, you'll need two zones - one hot, one cool - so you can sear the tenderloin before allowing it to cook slowly for 90 minutes.

When the grill is ready, sear all sides of the meat until brown and then place the tenderloin on the cool side of the grill with the fat cap up and close the lid.

As the pork cooks, prep the rest of the ingredients, making sure the apples, carrots, potatoes and onions are diced the same size so they cook at the same rate. The dice should also be small, so it cooks fairly quickly.

After the pork has been on for an hour, place a pan on the sideburner or on the grill and fry the bacon. Remove the bacon from the pan and add the diced carrots, potatoes, garlic and onions, and season with salt and pepper. Sautee for 20 minutes or until the potato browns and softens (as an alternative, you can sautee the vegetables for 10 minutes and then stick the pan on the grill for 10 minutes). Add the diced bacon and apple, and cook for another 10 minutes. Remove everything from the pan so the apples don't overcook. 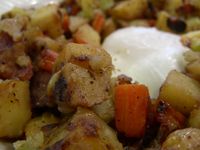 (If you want to add a poached or fried egg - and you do - now is the time to cook the egg.)

After an hour and 20 minutes, the pork should be about ready to come off the grill. Using a meat thermometer, the internal temperature should be 165 degrees. If it's fully cooked, allow the meat to rest for 10 minutes before slicing. Before serving, squeeze a little lemon on the pork.

And if you haven't already, pop open the beer and enjoy.

Nice recipe, although at 165 degrees the pork will be like shoe leather. If you trust your meat source, cook that to 150 and enjoy a much more flavorful and juicy pork.

Agreed, Pat, but if I wrote 150 degrees I'd be accused of trying to get people sick. And you're right, if you trust your butcher or store, cook the tenderloin to 150-155. Otherwise, shoot for 165 degrees. Thanks for the comment.