Pumpkin Liqueur for Halloween Fun Times!; or, How I Failed at Pumpkin Juicing. 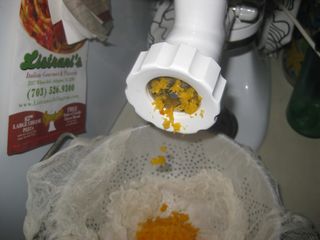 I try to keep my food and beverage choices on the natural and local side, but sometimes that plan goes awry. See this week when I got a hankering for a pumpkin cocktail, and decided that what I needed was some pumpkin juice, which I was pretty certain I could make myself. So I bought myself a 1 1/2 lb pumpkin at the friendly neighborhood Whole Foods (Yeah, I know the pumpkin was probably from Idaho; so sue me), chopped it up, and chucked it in a food grinder. I then squeezed the resulting pumpkin slurry through cheesecloth, and retained the sweet, sweet pumpkin juice that trickled out.

Ever try to juice a pumpkin without a proper juicer? Don't know what you ended up with, but I got about 50ml of liquid and a sink full of dishes for my trouble. There's got to be a better way! A lot of the top mixologists these days are using canned pumpkin to add some autumn flavor to their creations; I shunned this option pretty much out of spite. Screw that devil's fruit, and natural be damned -- suddenly I wanted something orange in a bottle!

In my line of work, I see a lot of wacky liqueurs, but I've only ever seen one flavored of pumpkin. Apparently, the value-for-cost ratio for producers is on the low side, so the only game in town is from good 'ol Hiram Walker, makers of the finest garish-colored, sugar-loaded mixers money can buy! I picked up a bottle of their Pumpkin Spice Liqueur at One West Dupont Wine and Spirits for about $10.

So what to say about the Hiram Walker Pumpkin Spice Liqueur? How about this from the producer's website?: 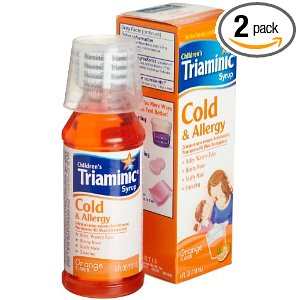 On its own, this stuff is undeniably awful: The color, though, is truly amazing, reminding me of that bright, mesmerizing, other-earthly orange of Triaminic Cold Syrup. The nose is medicinal and slightly creamy, with a high note of some sort of undefinable fruit. On the palate, it very sweet and corn syrup smooth, with some of the advertised graham cracker, along with more of that unpleasant, bizarre medicinal thing.

I was skeptical, but I have to say, though absolutely undrinkable on its own, this stuff is really not a bad mixer. Oh, sure, when mixed 1:1 with vodka as suggested on the back label it's almost WORSE, but when used in an ensemble, this player has quite a bit to add.

First, I tried a simple Manhattan recipe using two parts rye whisky, substituting one part Pumpkin Liqueur for red vermouth, with a couple dashes of bitters. Even with the brown spirit as a base, the cocktail came out a festive neon orange. The medicinal flavors are completely sublimated by the other spirits, and the sweetness is nicely tempered by the dry, spicy whisky; most of the liqueur's influence is asserted in the finish as pleasing vanilla and cinnamon notes. 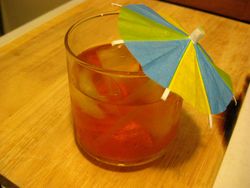 I also took the classic Margarita and squashed that shit up. The recipe was as follows:

When shaken and poured over ice, the end result was similar to the Manhattan; a BRIGHT ORANGE expression of the original, made slightly sweeter, with notes of vanilla and cinnamon on the finish. Not bad at all, highly festive, and easy to whip up as a pitcher drink, if you stir instead of shake. 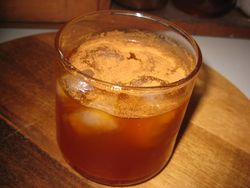 Speaking of pitcher drinks, I came up with a pretty tasty punch amongst my experiments with my new Tang-colored friend. Behold, the Autumn Harvest Punch!

Thanks to the opaque brown cider the Autumn Harvest came out a bit more naturally colored, though still very seasonally appropriate. This one had the perfect amalgamation of fruit, spice, vanilla, and bite. I tried it on the rocks with a bit of cinnamon on top, but I also imagine it would be great served hot. (Note: I used a very dry rye for this; if you make it with a sweeter whisky like Jack, up the whisky percentage to keep things balanced). 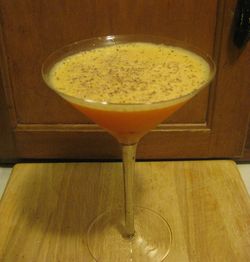 Finally, I thought it would be good to try something a little more on the highbrow side. Believe it or not, it's hard to find a complex cocktail based on a $10 rail liquor, but there was  one promising candidate from Colleen Graham of About.com.

Pour the ingredients into a cocktail shaker filled with ice.
Shake vigorously (to ensure the egg is properly mixed)
Strain into a chilled cocktail glass.
Sprinkle grated nutmeg on top if desired.

This was an amazing cocktail, and also pretty easy to assemble. On the nose, this one was heavy on the rye spice, with an assertive licorice note. The texture was full and silky, with mulling spices mingling well with orange and anise, leading to a creamy, smooth, easy going vanilla finish.

I have become used to being a failure, but rarely does it turn out this well. While I am sure pumpkin juice is great and all (apparently its all the rage at Hogwarts), it turns out the Hiram Walker Frog is actually a bright orange Prince. As I said, I picked mine up at One West Dupont Wine and Spirits, but it should be pretty widely available this time of year. Got a shindig goin' down this weekend? Grab a bottle, and have yourself a spicy, road-cone orange Halloween!

The pumpkin punch and the pumpkin Manhattan sound kind of awesome. Definitely a great seasonal drink.