The Grateful Harvest: A F@#%ING Cranberry Ale Worth Drinking.

Cranberry Ale! Cranberry, NUT CRUNCH F@#%ING ALE! Let me tell ya something folks, Cranberries and beer do not go together! One’s for bladder infections, one’s for getting DRUNK!

Thus spake then coke-fueled comedian, present-day animated saber-toothed tiger Dennis Leary way back in the early nineties. Funny rant, and there was once a point when I agreed. Don't remember the bit? Check it out below (suffice it to say, this is pretty damned NSFW, so put on some headphones).

The world of beer has changed a lot in the past 20 years. I wonder if the calmer, more well-heeled Leary of today feels the same about microbrews as he did in his psycho days. Well, the man did make a good point: Sam Adams Cranberry Ale sucks. This beer was also my introduction to fruit beers, and I did not take another turn at it for a many a year. Honestly, I don't know why they keep making that crap; I guess someone must buy it. In any case, another Boston brewery has recently taken up the cranberry for brewing inspiration, and pulled it off with style and grace. 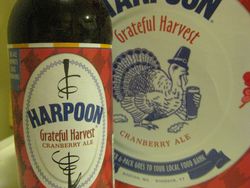 Harpoon's Grateful Harvest Cranberry Ale is a new addition to the venerable old brewery's stable of lagers and ales, and the first whose proceeds go directly to Harpoon Helps, the philanthropic wing of said brewery. For each six pack sold, Harpoon donates one dollar to a food charity local to the point of sale. According to the brewery, Harpoon Helps has already raised more than $230,000 for local charities this year, and has donated more than 16,000 pints to charitable events.

Charity is all well and good, but if the beer is no good, they aren't likely to sell a bunch. Fortunately, Harpoon did a damned fine job with this one. The beer pours a pretty russet brown, with slightly red highlights, and a short lived, off-white head. The nose is a rich amalgam of roasted nuts, dark red fruit and earth, along with a hint of malted grain. On the attack this beer is both sweet and tart, and flavored of sweet malt and dried leaves. The beer is slightly creamy on the mid-palate, where the cranberry flavor kicks in, leading into a dry, malty, bitter fruit accented finish. 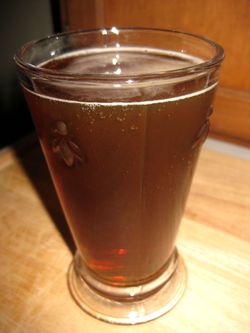 Where the Sam Adams Cranberry Ale is an over the top fruit bomb, Harpoon's Grateful Harvest is a highly drinkable, subtly flavored brown ale which anyone might enjoy. It's seasonally appropriate, charitable, and delicious; what's not to love? I picked up a six-pack at the Whole Foods in Arlington for $8.99, which I find to be a bargain. Unfortunately, I have not found a single other store that carries it in DC -- even the P Street Whole Foods doesn't have it, which really surprised me. I will keep my eyes open and update this post with more locations as I find them. In the meantime, the beer is available through December, according to Harpoon's website, and easily ordered from the local distributor, so encourage your favorite local shop to get you a case for your Thanksgiving shenanigans.

Wow, really? I thought this beer was horrible. My friend works at Harpoon and he was talking about how lousy it was and how everyone at Harpoon was secretly mocking it, but I decided to give it a try anyways. Suffice to say, it was the first six pack I have ever RETURNED to Whole Foods. Pretty disappointed with Harpoon's Winter Warmer this year as well (last year's was great).