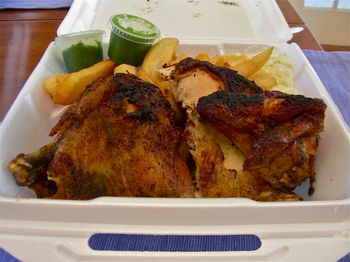 No restaurant epitomizes the concept of doing one thing well like El Pollo Rico.

You ignore all that because that chicken, coated in Peruvian spices (ground Inca and cocaine) and rotisseried round and round, is absolutely amazing. 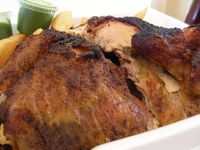 I've probably eaten hundreds of chickens in my lifetime. After all, it's the first white meat. Yet, I remember the first time I had El Pollo Rico. My buddy Columbo brought a few earth-friendly Styrofoam containers full of half chickens and fries over to my girlfriend's efficiency near Virginia Square. I still remember tearing into the chicken and being blown away by the flavor and thinking, "Wow, these fries really suck."

That damn chicken made El Pollo Rico an Arlington institution a long time ago. And as long as they keep cranking out that magical Peruvian bird, it'll remain an institution, crappy French fries and all.

Totally love how you captured the essence of El Pollo Rico chicken. Never thought their food could photograph so well.

Have you tried the chicken at El Pollo Sabroso on Mt. Pleasant Road? It is moister and better flavored than El Pollo Rico's chicken, and the green and white sauces that accompany it are vastly superior.

JB above is correct. Much as I love the chicken at El Pollo Rico the food at El Pollo Sabroso in Mt Pleasant is better. That and Heller's Bakery are the only things I really miss about living in that neighborhood.

Sounds like I need to check out El Pollo Sabroso. Thanks for the tip.

Ground Inca and cocaine as spices - Or coca? No wonder it's so addictive!

Have you ever hit Super Chicken on Washington Rd in Falls Church? Beyond awesome.And i love the name Super Chicken. Can't beat that with a stick.

Well that may depend on how big the stick is.

I love love love this chicken, and first had it when visiting my son and family in NoVA. I call it El Pollo Loco because it was a crazy trip trying to find it, even with GPS then.
We'll have to try the other two locations sometime. Thanks for the reminder!

Still rate El Pollo Rico recipe in Arlington, VA as the preferred chicken recipe of choice. It's a must to enjoy freshly cooked and straight out of the oven. It's not just me because when the chicken runs out customers simply wait for the chicken to cook...

You must be never think that you become a good musician in your future. Maybe you think bout another job, but still you love music that much and without you realize, youre already here and famous.

We are still mourning the loss of Chicken Rico here in College Park!

--Probably one of the darkest days of my college experience.

My friend has been talking about this place nonstop. I went to go to the college park location on a lunch break and lo and behold, it was closed. Such a shame. I have to make it to Arlington to try this stuff. Thanks for the review.

Preparation
Place peanuts in a spice or coffee grinder; process until medium ground.
Heat oil in a large Dutch oven over medium-high heat. Add onion; sauté 10 minutes or until lightly browned. Stir in ground peanuts, water, and next 5 ingredients (water through sweet potato); bring to a boil. Reduce heat, and simmer 15 minutes. Stir in chicken; cook 10 minutes or until chicken is done. Stir in cilantro.
Note: To make ahead, prepare the soup as directed, but stop before adding the cilantro. Cover soup and refrigerate up to two days. Let stand 30 minutes at room temperature; place in a saucepan over medium heat. Cook the soup until thoroughly heated; stir in cilantro.

I have tried chicken cooked in coconut milk with cabbage. That was absolutely good. You know, I have a garden at home, planted with vegetables and ornaments. My ornaments are sunflowers, daisy, roses and more. But the most dominating flowers are roses. I am really caring these plants because they are expensive here in our place, I earn much from it. I tell you few details on how I make these flowers bloom regularly. I fertilized them from time to time, every after blooming. And so I make reservations of fertilizers from Designer Soils. You can visit them online if you want. They are absolutely accommodating. The link to their site is http://www.designersoils.com/