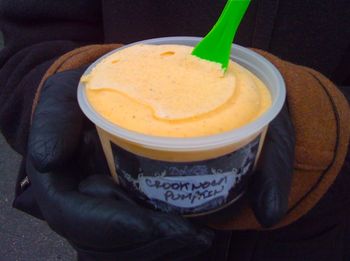 I don't have much of a sweet tooth. I like desserts well enough, but aside from a few slices of pumpkin and pecan pie during the holidays, I can generally take or leave the sweets.

Looking at the picture above, you may assume that even in 40 degree weather I seek out the creamy dessert. I don't, but I did for this post. I've been meaning to swing by the Penn Quarter farmers' market where Dolcezza has a booth, but didn't get around to it until the temperature crashed the other day.

For my trouble, I came away with a half pint of Crookneck Pumpkin gelato. Honestly, I could've taken the Mexican Coffee (which was spectacular), Tahitian Vanilla Bean or Valrhona Chocolate Amargo, too, but like I said, I have a weakness for pumpkin. 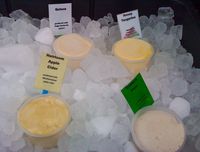 The poor woman manning the booth also had a selection of sorbets, including Heirloom Apple Cider and Honey Tangerine. They were good (especially the apple cider that's made with locally sourced apples), but I prefer the sorbet selection during the summer months when Dolcezza rolls out flavors like Mojito, Meyer Lemon Vodka and Strawberry Tequila.

I also prefer the summer months.

If I was a brighter man, I would've swung by one of Dolcezza's stores where I would have had a larger selection and heat. But I'm not a bright man. However, I am a man with pumpkin gelato, and that counts for something.