Sour Beer 2: How I Learned To Stop Worrying And, Um, Appreciate Sour Beer 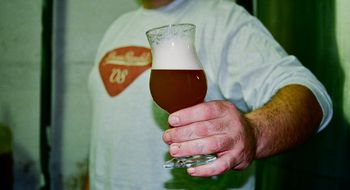 Mike Roy, the brewer at the Hyattsville brewpub Franklin's, doesn't like the term sour. It's too limited. He prefers to call them wild beers.

The sour in sour beers is acid imparted by bacteria, typically lactobacillus or pediococcus. To varying degrees, bacteria make beer tart, but lactobacillus doesn't taste like anything. That's why brewers add fruit to sour beers, age the beer in wine barrels or infect it brettanomyces (brett), a family of yeast that can impart earthy flavors ranging from smoke and leather to wet dog. Brett will also eat the sugars regular brewing yeast won't, resulting in a drier beer.

Because beers made with brett are not necessary sour, but are lumped in with them, Mike says the term wild beer is a better umbrella term that encompasses both sour and brett beers.

Depending on how much bacteria and brett a brewer adds, you can have a very dry, exceedingly tart beer (Hannsen's Oudbeitje), or a sweet, dry beer with just a hint of tartness. Then again, bacteria and yeast are living organisms, so you're never completely sure what they'll do to the beer. And even when brewers successfully control the yeast and bacteria, the range of flavors the microorganisms can produce is astonishing.

Mike is a fan of Oudbeitje, but lucky for the rest of us he's working on sweeter, more approachable beers at Franklin's. And if you're at all interested in exploring sour beers (er, wild beers), the Franklin's Funk Project will be a good place to start.

Sour (or wild) beer is a difficult style for the uninitiated. If your first sour beer is Duchesse De Bourgogne -- a big, sweet and sour Flanders red ale -- you're probably not going to be a fan of the style. Trust me. However, replace the Duchesse with a Monks Café or Helios from Victory and you'll wonder what all my fuss is about.

It's odd that a style of beer can have so much variation, but that's exactly why sour beers are as interesting as they are vexing.

Until recently, I was convinced that sour beer enthusiasts (sour geeks?) relish their little niche of the beer world. Unlike the rest of us slobs, they have sophisticated palates that can cut through the vinegar and barnyard flavors to discern qualities in a beer style most people would find repulsive.

It turns out I'm wrong, again. The people who like sour beers are an evangelical bunch. They're happy to talk about their kooky beers with anyone willing to engage in a conversation about infections, horse blankets and the romantic qualities of Belgian farmers (this may explain the limited popularity of sour beers).

I met up with Mike and fellow sour beer enthusiasts Nathan Zeender and Mike Tonsmeire for another beer tasting. Unlike the tasting I did at Granville Moore's, the goal of this session was to try a range of beers that were more approachable to the uninitiated. The beers included Helios, Petoskey Pale Ale from Leelanau, Fantome Hiver, a few sour beers Mike is working on at the brewpub, and a few homebrews.

Some were good, some were great, and a couple just didn't work for me (the Petoskey Pale Ale was too tart and dry, and a homebrewed Flemish red ale that Mike Roy brought tasted too much like a Flemish red ale). But given the chance, I'd try every beer again.

I brought the Fantome on Nathan's recommendation. Nathan is the rare individual who liked sour beers from the start. Nathan also has a barrel of sour beer in his basement. He's committed to the style, clearly.

The beer was Fantome's winter offering ("hiver" is French for winter), which is fine except for the fact that it was a saison, rather than a traditional sour ale, like a gueuze. Saisons tend to be sweet, refreshing beers, often served in warmer months. According to Nathan, style and tradition don't mean much to Fantome brewer Dany Prignon, who is more artist than beer maker. Prignon doesn't follow recipes much and brews what he likes. So, the Hiver might be a saison or it might be a lambic, but it almost always has a sour quality. You simply won't know what's in the bottle until you open it.

The bottle of Hiver we tried poured a hazy straw color, was mildly sour with a rich body and a bit tart. All in all, it was decent. The Helios was a different story. This wasn't my first experience with the beer and it won't be my last. Although a little tart, the beer was slightly sweet, dry and very crisp. Easily, one of my favorites of the night. Helios is also a saison that gets its dry, tart qualities from the brett Victory's brewers add to the beer (ok, my theory about saisons not being sour beers is shakey).

Then there were Mike's beers (that's Mike on the right). He makes his funk beers by adding a small amount of lactobacillus and brett to samples of the brewpub's regular lineup. The result was drier, slightly tart versions of the original. They were delicious.

However, don't rush over to Franklin's for these beers just yet. The first Funk beers are still a couple months from being ready. In February, the first two beers, Gotta Have That Funk (a dark, copper brown ale) and Higher Ground (a tart tripel-style ale), will be available in limited quantities on draft and in bottles at the brewpub. Sometime in the spring or summer, Mike will release Miss Lucifer's Love, a funked fruit beer made with currants.

Because the Funk beers include brett, Mike keeps them in a corner of Franklin's basement. Tucked behind stainless steel tanks and sacks of malted grain are a trio of plastic containers and four small kegs. This is the home of Funk. 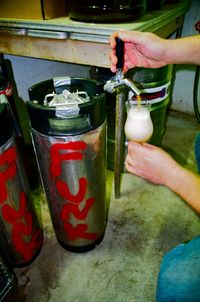 Judging from the sample he brought to the tasting, the Higher Ground is the farthest along. It has all the traditional fruity sweet qualities of a Belgian tripel, but it's just a bit drier, and the tart, sour flavors are subdued. By February, I expect it to taste more like Helios, with a more pronounced tart flavor and crisp finish.

If I've learned anything in my sour beer trials, it's that there is no sour beer, but there are many, many sour beers. It may be the most varied of all beer styles, which makes it among the most interesting. When you order a pilsner, even if you've never had that particular pilsner before, you know what to expect. All pilsners tastes more or less the same. That consistency doesn't exist with sour beers. It's a wild beer style that demands exploration and I'm beginning to understand why sour beer enthusiasts enjoy them as much as they do.

I wanted to do a follow up photo with the Duchesse for this post. So I popped the cork, poured a glass and took the pictures. Afterward, I decided to give the old gal one more try. Now that I've tried all these sour beers, I was curious to see if the beer was as repellent as before. At least I knew what I was getting into this time.

You know, it wasn't that bad.

The first taste was still a slap in the mouth, but once I got used to the vinegar I began to taste caramel and dark cherries hidden underneath. It was malty and sweet like I'd expected the first time I bought it, yet it was more effervescent than a traditional ale. Over the course of the next three hours, I watched the Bucs lose to the Falcons and polished off the 750 ml bottle of Duchesse De Bourgogne.

I didn't love the beer, but I certainly didn't hate it. And considering where I started with the Duchesse, that's quite something.

I know it's a cliche way of wrapping up this series, but I do think I'm acquiring a taste for sour beer. Developing a taste for lonely Belgian farmers will take more time.

Drew, I loved seeing Mike and Nathan featured in the article (that dining table looks familiar) as I'm great friends with them. However, just one thing to point out, saisons are some of the driest beers out there (often more so than sours). And, traditionally drank in the summer months by farmers. Fantome's take on the style is considerably different than how they were originally made (very low ABV, rarely spiced).
Either way, I'm glad you're getting into sours. Did you get to try the Wee Heavy that came from Nathan's Bourbon barrel? It's fantastic.

Thanks for the comment, DanF. Yeah, my knowledge of Belgian beer is fairly limited, and that includes saisons. So I don't recall the saisons I've had being very dry, but that doesn't mean they weren't. And it wasn't until trying Fantome and Nathan talking to me about Helios that I learned saisons could also be a sour beer. Seems to work well for that style. As for the barrel of wee heavy, sadly I did not try it. We kept the evening focused on sours that might work for a novice like me. Hopefully, I'll be able to worm my way back into Nathan's basement and check out those barrel-aged beers.

Actually the Wee Heavy is a sour. However, definitely wasn't the intention! But, it turned out amazing. All of us have plenty of bottles still kicking around, and the couple years of age on it is really improving. We'll be bottling the porter (from the bourbon barrel) here in another month or so. Any help would be appreciated!

I'm always happy to work for beer. Send me the details at drew@dcfoodies.com.

Im not a fan of beer but I wonder how sour beer taste? I have this feeling that I will like it.