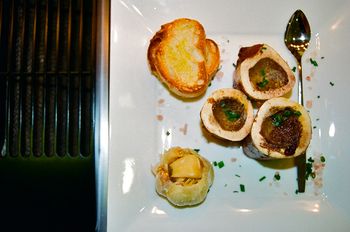 Whole Foods isn't a place where I expect to find anything cheap. It's understood that you go to the high-end grocery store to find organic artichokes and expensive cheese (honestly, I'm usually there for the solid beer selection).

So I was surprised the other day when I came across a $9 package of beef marrow bones in the freezer section. Sure, you can find marrow bones cheaper, but paying $9 for a dish that will take you 20 minutes to make and bring you the kind of joy that only fatty marrow can really ain't too bad.

Traditionally, bone marrow is used to thicken stews and stocks, but in the past few years restaurants from St. John in London to Blue Duck Tavern in the West End have roasted bones and served the marrow as an appetizer. It makes sense. Slathering marrow across warm toast is about as decadent as it gets. And for the restaurant, it's a cheap and easy ingredient.

I really can't stress too much how easy bone marrow is to roast. Stick a few bones in a 450 degree oven for 20 minutes. That's it. If you want toast, make toast. If you want to suck the marrow out with a straw, have at.

To pair with the marrow, I picked up a bottle of Sierra Nevada's new imperial India pale ale, Hoptimum. At 10.4 percent A.B.V. and 100 I.B.U.s, it's a very big, very hoppy beer. It's absolutely fantastic and, frankly, difficult to pair with food. Although the folks at Sierra Nevada did a nice job balancing the bitterness with a malty backbone, it's tough to find a food that won't be overwhelmed by the flavors of an IPA.

The bitterness of the beer cuts right through the richness of the marrow, yet marrow has more than enough flavor to stand up to an IPA, even one as big as Hoptimum. It's a hell of a pairing, whether you dine in or dine out.

Preheat the oven to 450 degrees. Arrange the marrow bones on a baking sheet, making sure they're standing up, not laying on their sides. Carefully place the tray in the oven and roast the bones for 20 minutes. Remove the bones from the oven and allow to cool for about five minutes. Before you serve, drizzle them with a little olive oil and season with salt to taste.

(If you want to include roasted garlic -- and you do -- cook the garlic ahead of time. Preheat the oven to 375 degrees. Cut the top off the head of garlic and place in the middle of the sheet of aluminum foil. Drizzle with a couple teaspoons of olive oil and add a pinch of salt. Close the foil around the garlic, creating a tight pouch, and place the garlic in the oven for 45 minutes. Remove, open the pouch and allow to cool for a couple minutes. When the head of garlic is cool enough to touch, squeeze out the warm, soft garlic and spread on the toast with the marrow.)

Posted at 11:27 AM in Beer, DCFoodies Cooks, Do It Yourself, Food and Drink, Recipes | Permalink | Comments (2)

This is my go-to party app. Fergus Henderson's "Nose to Tail" cookbook has this with toast and parsley caper salad. The salad really brightens this dish up and takes some of the edge off the richness.

In the Columbo household if you roast anything (and I mean anything) you throw in at least one head of garlic as well. The dish doesn't exist (cold cereal included) that isn't made better by adding roasted garlic.