Home Archives About Facebook Twitter Instagram
Must Haves: Red Hook Lobster Pound's Lobster Rolls (but you knew that already)
DC Beer Week 2011: It's Going To Be A Busy Week 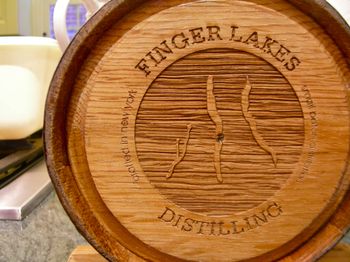 This post isn't for you. No, you're a right-thinking person with things to do. When you're hungry you eat. When you're thirsty you drink.

And when you want a cocktail, you don't wait four months for it. But that's what I'm doing. On my kitchen counter is a 2 liter wooden barrel that I filled with an equal mixture of corn liquor (think moonshine) from Finger Lakes Distilling and an equally un-aged Wasmund's Rye Spirit from Copper Fox. With any luck, the clear alcohol that went in the white oak vessel will - in time - exit it much more tan and much more flavorful.

In other words, I hope I have whiskey. 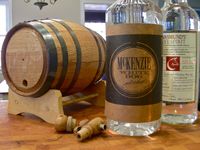 Sure, I could just go buy a couple bottles of whiskey and be done with it. It would cost me about the same (or less). But why do that when I can go through the trouble of preparing a barrel and waiting until June?

It's not the best reason in the world, but it's the best I've got. I'm also fascinated by the process of barrel aging - how the wood breathes, allowing the alcohol to leach into its charred interior and extract those beautiful caramel and vanilla flavors that make whiskey what it is.

Besides, as hobbies go, this is a pretty low key one. Once the barrel is prepped and filled there's not much to do other than wait. And when the whiskey is ready, you'll look like Jack Daniels pouring liquor out of your very own barrel (by your fourth high ball, you'll be telling people you're Jack Daniels).

Last year, I bought a 10 liter barrel for a homebrewing project and filled it with a finished whiskey, Early Times. The Kentucky whiskey is aged at least three years in oak barrels before it's bottled and sold. I gave it another seven and a half months in a new white oak barrel I got from Copper Fox (the smaller the barrel the less time the spirit needs to spend in it). The difference is dramatic. 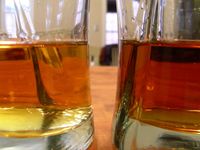 In the photo, the glass on the left is regular Early Times, the glass on the right is the Early Times I aged. Now, I like Early Times. It may not be as well regarded as Buffalo Trace or Pappy Van Winkle, but it's a smooth, easy drinking whiskey. My 8 liters of extra aged Early Times, though, can give the big guys a run for their money. It's as complex and rich as any of them. The Brown-Forman Corporation may have made the whiskey that went into my barrel, but I take credit for the whiskey that came out.

By the way, did you notice 10 liters went in the barrel, but only 8 liters came out? That's typical. Distillers call that the "angel's share" and it's the result of evaporation and absorption by the wood (and the occasional quality control sample). That's much of the reason why a bottle of 20-year-old Scotch whisky costs so much more than a 12-year-old bottle - by the time that Scotch reaches its 20th year, there's a lot less of it in the barrel.

So if you've got too much time on your hands and not enough sense to just go buy a drink, I have a project for you. Here's what you need and what you need to do to barrel age your own liquor:

New white oak barrels can be purchased from a number of sources, including Copper Fox Distillery, Thousand Oaks Barrel Company, or homebrew supply stores. Sizes range from 1 liter up to a full-sized 194 liter barrel (that's a lot of whiskey).

You can fill the barrel with either un-aged spirit, or add more flavor to a finished whiskey (or rum for that matter). The brand is up to you, but I've found Copper Fox's un-aged rye and whiskey locally at Central Liquor in Penn Quarter and Schneider's of Capitol Hill. 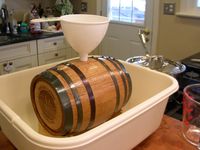 To prep the barrel, set it in a tub or sink, because it's going to get wet. Bring a pot of water to boil (boil more water than you need to fill the barrel), and then reduce to a simmer. You want to keep the water between 155 and 180 degrees. This will help the wood swell, closing off any leaks, and kill any bacteria that may be in the wood.

The barrel should come with a spout, bung and stand. Attach the spout and make sure it's opened. Insert the funnel into the bunghole (I know, I know) and, using a glass Pyrex measuring cup or similar heat-safe cup, carefully fill the barrel with the hot water. After a bit of the water has run through the spout, close it and finish filling. Once the barrel is full, insert the bung and spray the entire exterior of the barrel with the warm water.

For the next four hours, periodically spray the barrel with water (basically if it's dry, spray it down) and look for leaks. If you don't find any, drain the water and fill with booze.

The rule of thumb with aging is the smaller the barrel the less time you need to age the spirit. It has to do with the amount of contact the liquid has with the wood: smaller barrel equals more contact; bigger barrel equals less contact. So, if you buy the 194 liter barrel, you shouldn't bother checking the contents for a few years. But if you go with the 2 liter barrel, your newly aged beverage could be ready in a few months.

Love. this. so. much. What verve! I grew up knowing all about moonshine, but the idea to turn it into whiskey right at home. You just got total cool points in my book honey!

Hey its just awsum. Thanks for sharing. Keep it up. :]