After years of drought, craft beer is certainly on the ascendancy in Washington, DC. It was a bit of a rocky start, but with the advent of SAVOR, and major advocacy by beer lovers, DC is now a primary market for America's finest microbrews. But in terms of real local beer, we have kinda gotten short shrift. Sure, there are a number of brewpubs, and the small and plucky Shenendoah Brewery is still out there, but inside the Beltway, that's about all she wrote. Soon, that will all change, with the approach of Chocolate City Beer and DC Brau, both District-brewed beers which are expected to launch in the next couple months. 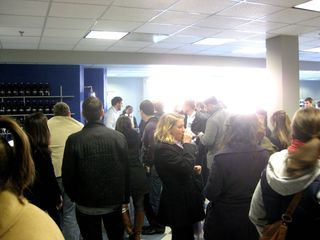 In the meantime, a third Beltway Insider has beaten them to the punch: Port City Brewing Company of Alexandria. Named in honor of Alexandria's colonial status as the fledgling nation's most important seaport -- and later, home to one of the nation's largest breweries -- Port City started brewing late last month, and slowly but surely, have seen their product trickle onto the market. A couple weeks ago, I visited their facility for a quick tasting and tour.

Port City's spacious tasting room was pretty well packed when we arrived. We pushed ourselves forward to the bar, and managed a quick sampling of the wares, before the tour got going. 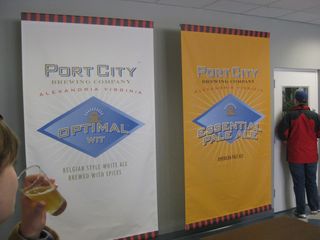 Three of Port City's four inaugural beers were up for tasting that afternoon: The Optimal Wit, Essential Pale Ale and Porter. Due to various jostlings and general hubbub, I wasn't able to take pictures or notes, but I can say that I was duly impressed.

The Wit came first. This hazy, light golden beer is made in the Beligian style, with Belgian yeasts, and flavorings of coriander, grains of paradise and orange peel. PC's was definitely less aggressively flavored than many, with the spices adding a light 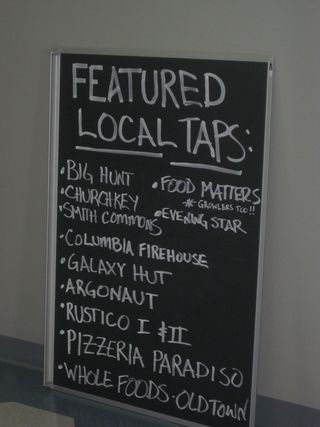 counterpoint to the mild yeastiness. Though not likely to impress lovers of the real heavy continental stuff, this beer is balanced and refreshing, and a perfect beer with which to blitz the market at the beginning of Spring.

The Essential Pale was next, and came as a bit of a surprise. This golden ale -- which I expected to be on the light-handed side -- had an aggressive hoppiness on the front, followed by clean, malty flavors. We're not talking IPA levels of IBUs here, but the Essential was no shrinking flower, despite being the most "basic" beer on tap.

The Porter was my favorite. This powerful beer boasted a complex melange of dried fruit, dark chocolate, coffee grounds, and, again, surprisingly abundant hops. This beer is very nicely balanced, and not overly heavy and syrupy given its relatively high alcohol (7.5 %). 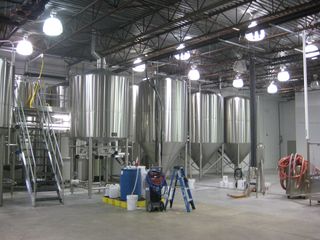 After the whirlwind tasting, we were escorted through the back to the brewery floor. PC's cavernous facility boasts a brand-new 30 Gallon brewing system, which can produce some 8000 pints per batch. Brewery owner Bill Butcher took us through the whole process, from grain to keg. To all but the truly geeky, a description will not translate, so I highly suggest you visit yoursel 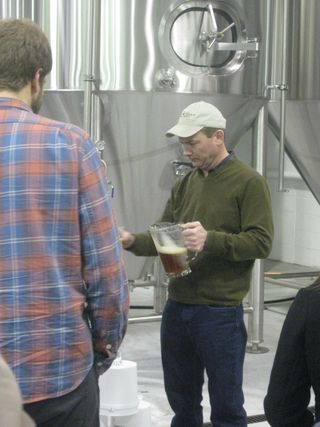 f, especially if you have never seen a working brewery (hours listed below).

One cool thing about the tour, though, is that we were allowed to sample the brewery's then soon-to-be-released Monumental IPA, straight from the tank. I was surprised to find it just barely hoppier than the Essential Pale we had sampled earlier, but the beer was due for another six days of dry-hopping, so I will forgo judgement till I taste it from the keg. 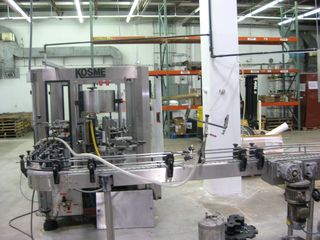 Perhaps most exciting was PC's bottling line, just purchased from Southern Tier Brewing Company. Though not much to look at, this little guy can bottle at a rate of 50 bottles per minute, and means that Port City should be hitting store shelves by as early as next week!

Barely a month old, Port City has a healthy list of clients for their kegs (note picture above), and sells growlers on premises. Keep an eye out for those bottles, though, and hang onto a sixer for your grandkids. When the DC area is once again one of the great brewing centers of the country, you can show them that six pack, and say you were there at the beginning.

Hey, it could happen!

Public tours begin at 2pm and 3pm on Saturday, no reservations required. Cost is $5, which includes a tasting glass to keep and a full tasting of each beer on tap.

Congratulations to Port City Brewing Company! I am wishing you the best and success of your business. I hope that you will continue rendering quality services to the customers with your quality products. We all know that beer is the most likely favorite of everyone. With this, I hope that you will maintain or improve more your standards.