The Queen Vic: A New Restaurant On H, An Actual Gastropub For D.C. 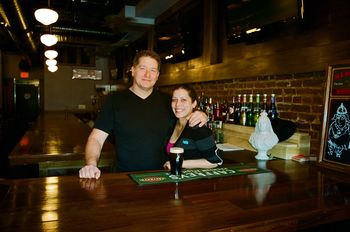 Ryan Gordon knows what a gastropub is.

That's absolutely right. But if you want to eat, there's a menu that combines traditional pub fare with plates typically scene in white tablecloth dining rooms.

Ryan knows this, too. He should, he's opening a gastropub next week.

On April 4, Ryan and his wife Roneeka will open The Queen Vic, the newest addition to the H Street dining corridor. On paper it looks good: 20 beers on draught and 20 bottles, soccer and rugby on the flat-screen TVs hanging behind the two bars, and a menu that hits the U.K.'s greatest hits while managing to work in enough culinary flourishes to put the gastro in gastropub.

The restaurant's name is even a nod to the long-running BBC soap, EastEnders.

But just because a restaurant calls itself a gastropub doesn't mean it is. Frankly, most of the gastropubs in D.C. aren't gastropubs, and some of the ones that were eventually dropped the concept.

CommonWealth opened as a gastropub in 2008. Offering cured pork belly, oyster pie and house-made head cheeses along side fish and chips helped establish the Columbia Heights restaurant as a solid example of a British gastropub. In time, however, the menu became more "continental Europe" and less creative. CommonWealth closed in February.

This begs the question: can The Queen Vic succeed where CommonWealth failed? Does D.C. know what a gastropub is and is it a concept people are interested in?

We're going to find out.

The Gordons, and silent partner Kevin Bombardier, brought in Adam Stein as their executive chef (on the right next to sous chef Blake Aredas). Stein -- who worked under chef Matt Jennings at La Laiterie in Providence, R.I., before returning to the area -- is a farm-to-table adherent. He plans to butcher in-house. He plans to source locally and cook seasonally. Even the British staples will be sustainable. So while the fish and chips may be standard fare, the fish Stein will use will change based on its availability and sustainability.

For inspiration, Stein cited April Bloomfield and Fergus Henderson. Henderson might not have invented nose-to-tail cooking, but he picked up a Michelin star revolutionizing it in his London restaurant, St. John. Bloomfield's New York restaurant, The Spotted Pig, is widely considered the best gastopub in the country. So when you say that your restaurant's cuisine will tack closely to Bloomfield's and Henderson's, the world knows what to expect ... and where you fall short.

Signs of Bloomfield's and Henderson's influence are tucked into The Queen Vic's inaugural menu. There are the fried oysters on the half shell - a trio of fried oysters served with foie gras, duck confit and cornichons. There are the rich, roasted marrow bones, an appetizer Stein said he is lifting directly off St. John's menu.

The chefs' influence will also be seen in the daily specials, which will showcase the benefits of butchering on-site, such as house-made head cheeses, braised beef cheeks and sweetbreads. Stein said the specials menu is where he will react most quickly to changes in seasons and ingredients.

While Stein clearly wants The Queen Vic's menu to be thoughtful and progressive, it's some of the traditional items that stand out. Certainly, you can't open a British restaurant without fried fish and french fries, but the traditional English breakfast (beans and all), pork scratchings and curries show an attention to detail that most of the British (and Irish) themed eateries miss.

(I can't overstate the significance of a good Cornish pasty. They're like a large empanada without the egg. Absolutely simple, absolutely fantastic. However, most of the ones I've had here in the states are sorry. More often than not, they're like doughy wontons straight from the frozen food isle. Stein promises the real thing. If he delivers, I'll trust anything he puts on his menu.)

As for the bar, the opening draft selection isn't all it could be. The taps are dominated by familiar names: Guinness, Harp, Kronenbourg 1664 and Smithwicks (none of which are British). However, there are a few bright spots, including Fullers ESB, Wells Bombardier, Harviestoun's Old Engine Oil and Old Speckled Hen.

Ryan admitted the beer lineup was the best he could do in a short amount of time. By the end of April, he expects to replace many of the beers with more interesting offerings.

Although the gastropub doesn't have a beer engine behind the bar (a real shame, especially as so many beer bars around town now have one or five), there are four nitrogen taps behind the upstairs and downstairs bars. So there may not be the hand-pulled beers so typical of British pubs, but there will be eight taps pouring plenty of smooth, creamy pints.

It's not hard to understand where the level of detail that's gone into The Queen Vic came from: Roneeka was born in Britain and raised in Wales. Her parents own and operate a hotel and restaurant in Bridgend, Wales. Before she was a teenager, Roneeka was already working in her family's restaurant. The Queen Vic isn't so much a concept as an extension of the cuisine that she grew up with. At least it should be.

Just to make sure Stein is clear on the concept, Ryan and Roneeka sent their chef on an eight-day tour of Britain and Wales. The tour began at her parent's restaurant, the Bokhara Brasserie. It was there that Stein learned how to make murgh makhani, a butter chicken dish Roneeka grew up with. From there, Stein headed to a butcher shop in northern Wales and spent time in London, dining at The Bull & Last and St. John.

If the gastropub concept doesn't fly, it won't be for lack of effort.

Like the menu, the restaurant looks the part of a traditional British pub. The red and black exterior opens to a cozy bar and dining room. The layout is repeated on the second floor, which leads out to an outdoor deck on the back of the restaurant.

Ryan said The Queen Vic will accommodate a little less than 100 people, a couple dozen more if you count the deck.

While the gastropub may be small, it took a sizable effort to get it ready for its debut. The building burned down, twice. Before work could begin to turn the building into a restaurant, it needed to be gutted and rebuilt. The façade was out of alignment and had to be screwed back into place, and much of the roof was replaced. The deck was a new addition.

To give the rehabbed restaurant an older feel, they used as much recycled and refurbished materials as possible. Doors came from old schools, the phone booth is, well, an old phone booth. The roof may be new, but the exposed beams, stained a dark mahogany, help add a rustic, old(er) pub feel.

The Queen Vic will be located along the ever-more popular and ever-more crowded H Street corridor. Ryan, who's an investor in the neighborhood bar The Pug, says the gastropub should fit right in. Although H Street has an increasing number of bars and restaurants, it's an eclectic mix. So rather than being lost in the myriad of options, The Queen Vic do well situated between the sushi and tater tots joint and the Philly style sandwich shop.

Besides, Ryan said, the cadre of new bars and restaurants that have sprung up on H Street over the past few years tend to support one another (Teddy Folkman, executive chef at Dr. Granville Moore's, introduced Stein to the Gordons). It's the rising tide lifts all boats theory: the more traffic and positive attention one bar or restaurant can attract, the better off all the neighborhood bars and restaurants will be.

But positive press and big name inspirations will only help so much. The British gastropub is a great concept that most people misinterpret or simply don't understand. If The Queen Vic is a success, it'll be because Ryan, Roneeka and Chef Stein find a way to give D.C. a true gastropub, one that will hopefully stick around a while.

Thanks for the share your personal story I really love this post and i think you are great.

Nice article, thanks for the information.