Home Archives About Facebook Twitter Instagram
The Queen Vic: A New Restaurant On H, An Actual Gastropub For D.C.
White whiskey is not moonshine, but it may be the new absinthe 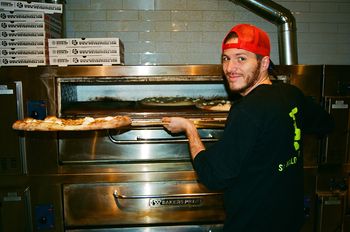 If variety is the spice of life, then D.C.'s pizza scene is bland.

In fact, it's boring.

Want a pizza in D.C.? Here's what you'll get: an over analyzed 8 inch pie, cooked to a crisp in a 7,000 pound stone oven hand carved by Sicilian grandmothers, blessed by the Pope and shipped to America by the decedents of Amerigo Vespucci. The toppings, what few there are, will be sustainable, local and if you're lucky, "interesting."

The foodie culture - in which I am a participant - has transformed the simple pizza pie from a meal into social discourse. And every now and then, that's fine. I like the pies at 2 Amy's and Pizzeria Paradiso (to say nothing of the pizza at RedRocks, Matchbox, Pizzeria Orso, Ella's, Lost Dog, Seventh Hill, Il Canale, Comet Ping Pong or Pete's Apizza), but I can't tell the difference between a Neapolitain-style, New Haven-style and a thin crust pizza (if there is one). And every now and then I want a slice of pizza that I don't have to think about and can't finish in two bites. Sometimes I just want a slice of pie and a cold beer.

Spike Mendelsohn gives me that.

Instead of precious pizzas for one, Mendelsohn's Capitol Hill pizza shop, We, The Pizza, peddles in large pies and large slices. The pizzas are the size of traditional New York style pies, but thicker, which the Top Chef alum refers to as Capitol Hill style. Although he likes New York-style pizza, the additional thickness helps support the toppings. Yet, they're not so thick that you can't fold them.

The toppings range from cheese and pepperoni to roasted potato and pancetta. And while Mendelsohn is quick to note that he sources locally, uses fresh ingredients, makes his sauces in-house, etcetera, etcetera, his slice of pepperoni glistens with enough pork grease to make me not care. The 30 kids lined up at the register don't care, either. It doesn't matter to them whether Mendelsohn pronounces mozzarella correctly or whether the cheese came from a grass-fed buffalo or cow. They want pizza, not a culinary experience (unless you count gawking at celebrity chefs). 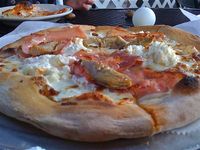 What I like most about We, The Pizza is that it manages to be different by being familiar. They're not cranking out the best pies I've ever had (Geno's East), but they are producing solid, tasty pizza. Look at the photo to the left. Where's that pizza from?* RedRocks? Pizzeria Paradiso, maybe?

That's the problem, isn't it? When everyone is making the same pie, the only thing that separates them is quality (which is relative), location (which is relative to where you are) and for me, beer selection (that's why I like Pizzeria Paradiso so much). Otherwise, there's no damn difference between most D.C. pizzerias. Their pies are as redundant as they are flimsy. After a while, I get tired of the delicate little pizzas that cost me $20 a pop (and if I'm dining with my wife, let's make that $40, because I'm 6'2", 195 pounds, so the one pie ain't going to cut it).

I'll say again, I like the many of the pizzas served around town (sit down Jumbo Slice and Pizza Mart, you make mediocre pizza for twentysomethings too drunk to know better). I just want a few options, and that's what We, The Pizza gives me.

He's right. Most folks aren't as wrapped up in the authenticity of the pizza experience. They just want a good slice of pie.

Every Friday night, my wife's parents enjoy a couple of beers and a pizza at ABC Pizza, a small pizza chain in Florida that's as authentically Italian as Popeyes. It's their thing. While they've enjoyed the pizzas at 2 Amys, and my mother-in-law raves about Pizzeria Paradiso, they still love their Friday night pizza at ABC. Sure it's familiar. Sure it's simple. But it's good pizza, and that's what keeps them going back every week.

"When you go into the pizza business everyone thinks you have to be Italian. We have a few Italian touches here and there," Mendelsohn said, "but this is a true American pizzeria."

The best pizza for me is the one that is spicy, delicious and which is not thin. I hate pizza which is lesser the half inch in thickness.

My experience has been that
Spike's slices look better than they taste. The plain is alright and, oddly enough, has more flavor than the ones with toppings.

The best NY slice I've had in the region still has to be Valentino's. Their 20" pepperoni is my gold standard for the style.

Yummy looks so delicious. I just loved it. Thanks for sharing such post. Keep it up.

My friend, you just named a Chicago-style pizza place as yer favorite. I bet it's delicious, but that's not pizza. Some type of casserole perhaps. I have not tried Spike's joint yet.

Try Pizzaiolo on Fern St. in Alexandria. Terrible name (how do you pronounce it?), good pizza.

Thanks JD, you make a fair point. I'm sure there are just as many people, or more, out there who hate deep dish pizza. My bigger point was the seeming lack of variety we have in DC. Just yesterday, Tim Carmen at the Post wrote about another new pizzeria. What kind of pizza does Pizzeria da Marco serve? That's right, thin crust Neapolitan style. Aside from Spike's place and a few other pizza joints, like Ledo's and the national chains, it's nearly impossible to find anything other than these wan little gourmet pies in DC.

Hey take a look at the reveiws of Ed Levine's pizza book over on Amazon. Chicagoans are so sensitive! I've loved Ed since NY Eats because he has a point of view! Helps that I agree with him almost always.

Pizza are so nice to eat. Especially during snack time and family outings. I love the pizza which is thick and full of flavors that i would be really satisfied.

I grew up in Chicago and miss deep dish pizza like none other. Nice shout out to Geno's--it was always my favorite!

And I agree, DC pizza leaves much to be desired. I've recently tried Pete's Apizza of New Haven and it was pretty good, nice crispy crust, not too overly greasy, but again, more of the same.

Would love to see a deep-dish place in the area.

Pete's New Haven Apizza on Wisconsin Ave is great. Chicago pizza is not pizza. Come up with another name for it. How about Eggless Italian Quiche?