Home Archives About Facebook Twitter Instagram
White whiskey is not moonshine, but it may be the new absinthe
In D.C., The Only Thing More Elusive Than Statehood Is A Good Cubano

Savor: The Beer And Food Gala Is Still Trying To Get The Food Right 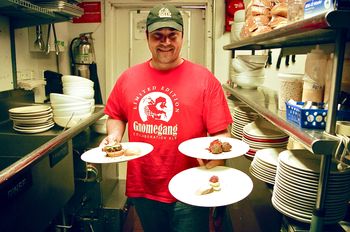 Entering its fourth year, Savor is every bit the premiere craft beer showcase the BA intended it to be. For a city making a name for itself in the craft beer world, it’s also exactly what D.C. needs. Once a year, the craft beer community turns its attention to the District as some of the best brewers in the country bring us a few beers to enjoy. And enjoy, we do.

Thing is, though, Savor is a beer and food event, and so far, the food hasn’t lived up to the equal billing.

Ok, that’s not completely true. The Artisan Cheese Table and the Oyster Bar have been bright spots, exceptions to the rule. As for the rest of the food, it hasn’t always been worth the price of admission ($110 this year). Importantly, this is the food that’s paired with the beer. This is the food that the brewers are expected to talk up along with their beers.

At best, the food has been mediocre. At worst, it’s been quite bad. The food for the past three Savors has looked bad, tasted bad, hasn’t kept well, and hasn’t always paired well. I'm not alone in my opinion of the food, either. I've talked to past attendees and brewers and heard the same: the food has been a disappointment. 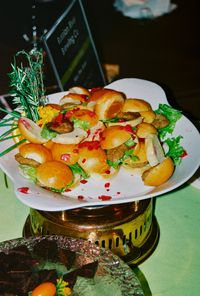 The sweet and chewy shrimp corn dogs, the gray meat sliders, the bland and cold quesadillas, and the grainy espresso sambuca parfaits are just a few examples of a food program that has been the biggest flaw of an otherwise excellent event. This wouldn’t bother me quite so much if Savor was merely a beer event. But it’s a beer and food “experience,” therefore the food must be as good as the beer. It’s not, at least not yet.

You have to hand it to folks at the BA, though, they are willing to tinker with their event. Every year for the past four years, they’ve changed something about Savor, and more often than not it’s been for the better. The first year Savor was held at the Mellon Auditorium. It’s a pretty venue, but it was too small, so they moved to the equally nice, but considerably larger Building Museum.

During that first year, the speaker salons were free. That was nice, but the sessions filled up quickly and led people to crowd around the salon room doors for a chance to grab one of the few seats. To bring some order to the salons, the BA started selling tickets. Sure, $30 is a steep price to listen to brewers talk about beer, but you don’t have to buy a salon ticket to get into the main event.

Recognizing the popularity of the event, the BA made this year’s Savor a two-night event, as it was the first year. A lot of people didn’t get tickets this year (thanks, in part, to the BA’s Website crashing when the tickets went on sale), but more people will be able to attend than last year.

And in this same spirit, the BA continues to work on the food.

Last year, the BA hired chef Bruce Paton to “enhance” the food experience, which for the first two Savors was pretty poor. Patton has experience with large beer events, having worked with the BA on the Great American Beer Festival, the biggest craft beer event in the country. Unfortunately, the food was as it as always was.

This year, the BA brought in two chefs, Adam Dulye from The Monk’s Kettle in San Francisco, and our own Teddy Folkman, executive chef and co-owner of Dr. Granville Moore’s. However, Dulye and Folkman were hired to be consultants, not chefs. For all their culinary acumen, Dulye and Folkman did not contribute a single recipe or cook a single dish. They were contracted to conceptualize the food pairings, but the recipes and cooking was left to Federal City Caterers, which has catered all the Savor events.

Folkman said he has faith in the catering company and its staff, but was wary - and surprised - about not having a greater role in the dishes’ development or execution. For this article, Folkman put together a few of the dishes he was working on for Savor; however, the Cuban slider, stout meatballs and deviled egg that you see in the photos are not necessarily the same dishes you’ll see at Savor. You’ll see and taste Federal City Caterers’ dishes.

During a recent tasting led by Nancy Johnson, event director for the BA, Folkman got a chance to taste many of the dishes Federal City Caterers developed based on his and Dulye’s recommendations. While some dishes were just as Folkman envisioned, others needed minor revising, and some were altogether different - not always for the better, he said.

Deborah Allen, co-owner of Federal City Caterers, said she and her staff have to take many things into consideration when developing hors d’oeuvres for Savor. When necessary, she’ll change an ingredient or eliminate ingredient to make sure the dish works with the beer pairing and can be executed a thousand times over for the event.

In addition to making sure the dishes pair with all 144 beers, the food has to be easy to handle for attendees holding tasting glasses, capable of being transported to the event site and then served as is or with minimum heating (the Building Museum doesn’t have a kitchen). The food must be able to remain fresh for some time in case it’s not eaten immediately, and it has to meet the approval of the BA, the brewers, the consulting chefs and a couple thousand attendees.

Listening to Allen describe the preparation and execution of Savor’s food program you begin to understand the scope of Federal City’s task. The catering company will prepare more than 80,000 items for Savor. She began work on this year’s event two weeks after last year’s event ended. She’ll have 160 people serving attendees, refreshing ice trays and water pitchers, refreshing the food, dumping food that needs to be dumped, working the nonalcoholic stand, and cooking special dishes for the 12 sponsor tables.It is quite an undertaking. But at the end of the day, I can’t help but return to the fact that the quality of the food has never lived up to the quality of the beer.

And then when I see that this year’s menu includes grilled steak and sausages, crispy tuna rolls, braised sliders, pork belly and shrimp wrapped in a grit cake - all dishes that could be great when fresh and hot, but miserable if left to cool and congeal - I think I’ll be glad that I once again ate beforehand.

Johnson, who led the committee that came up with Savor, is understandably positive about her food program. Although the BA has continues to revise the food program - from how the food was paired with the beer to how much say brewers get in their pairings – Johnson said the BA started in a good place and is simply looking to improve.

For last year’s Savor, the participating breweries were sent a menu of “popular pub items” to choose from. Although there were more than 45 dishes on the menu, Folkman said many breweries ended up picking the same items, which led to a lot of redundancy (Savor: a beer and quesadilla experience).

This year, the BA abandoned the democratic approach and turned the pairings over to Folkman and Dulye. Folkman said he and Dulye took the list of beers the breweries plan to bring and divided it into style categories: IPAs, stouts, ambers, lagers. The chefs then came up with dishes to compliment the styles rather than specific beers. So there will be a dish for the pale ales and a dish for saisons, etc.

Despite this broad approach, Folkman said he wants the beer and food pairings to make sense, to tell a story. So saisons and Belgian-style ales will be paired with the classic French croque monsieur, while the bolder-flavored India pale ales are matched with spicy crawfish fritters. And just in case the pairing isn’t completely obvious, every station will include a card explaining the match.

Like last year, though, the brewers won’t have a chance to taste the pairings until the day of the event.

For the 12 sponsors, Folkman has something completely different in mind: a cook for every sponsor. Folkman said Federal City Caterers will station a cook at each sponsor’s table. The sponsors’ offerings will be hot, cooked fresh and either prepared with the sponsor’s beer or for a beer the sponsor brings. The highlight of the sponsors’ dishes may be the lobster roll paired with Sam Adams Boston Lager. (Anticipating that the lobster roll will be a popular item, Allen said her staff will make extra to accommodate the interest.)

The BA is also adding a sushi stand and considering a panini station to accompany the cheese and oyster tables.Folkman, who led one of the educational salons last year, said he didn’t try any of the pairings last year, but agreed that the food could be better.“It’s progressively gotten better every year,” he said.

“Hopefully (this year), it will meet the expectations of the guests.”

Everyone I interviewed for this article was very positive about this year’s food program. Sure, Johnson and Allen said some things haven’t worked in the past, but that’s all part of the evolution of Savor. While Folkman was surprised that he wasn’t more directly involved with the food, he had nothing but good things to say about Federal City Caterers and expects this year’s food program to be better. 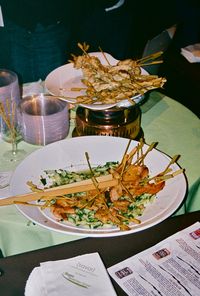 So then who’s to blame for the miserable dishes of Savors past? And who will be responsible if the quality of the food falls short again? Is it Federal City Caterers, who’s charged with feeding thousands of half-cocked beer enthusiasts while keeping the brewers, the hired-gun chefs and the BA happy? Is it the latest pair of chefs who have big ideas, but no involvement in the actual cooking and catering? Or is it the Brewers Association, which approves all the dishes, hires the famous chefs, hires the caterer, sponsors the event and insists that Savor is a beer and food experience?

As the saying goes, the buck stops with the BA. With ticket prices for this beer and food experience climbing above the $100 mark, attendees deserve an event that gets it right on both counts. If it doesn’t, the BA should seriously consider either dropping the food (and the ticket prices) or turn the food program over to someone else to run.

Although I normally get my foodie inspiration from the recipe club to which I belong, I'm branching out and attending more food events to widen my reach of great recipes. This sounds like an amazing event and I wish I were going to be in DC to experience it.

Hey, thanks for your sharing. Its amazing. I liked the recipe much. Keep it up,keep sharing more recipes. I have some amazing recipes too. For sure you will love it. Waiting for your visit to there. Have a good day guys.