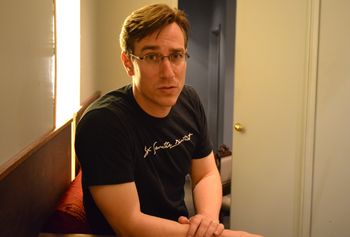 Ostensibly, he's a bartender, though when pressed, even he can't settle on that.

No, Derek Brown is busier than that. In no particular order, Brown is a business owner, historian, writer, judge, consultant, instructor, and bartender, who in addition to manning the bar of his well-regarded cocktail club, the Columbia Room, is occasionally called upon to shake and stir libations for heads of state, European royalty and the nice couple who live at 1600 Penn. Ave.

Brown's work behind the bar has resulted in heavy recognition from his peers within D.C. and across the country, including the James Beard Foundation, as well as magazines and newspapers that are as likely to quote him as employ him. In a city with quite a few great bartenders, Brown may be the best and is certainly the most well known.

Three years ago, I didn't have a clue who he was.

I was an assistant at the cooking school CulinAerie and signed up for a series of cocktail classes taught by one of the bartenders from The Gibson, the speakeasy off U Street whose pretentious concept was reason enough for me to avoid it. However, Brown was an affable instructor, and over the course of the three classes, I came away with a better understanding of the science of cocktails, as well as a drink of my very own. All thanks to the guy from The Gibson.

It's from that frame of reference that I began following Brown's career. Typically, we get to know the big name chefs and bartenders around town through articles and interviews. Before we eat their food and drink their drinks, we know their back stories, their approach to their craft. I've never met Michel Richard or dined at Citronelle, but given the number of articles I've read about the chef and his restaurant, I have a fairly good idea of what to expect from both. With Brown, I had nothing.

Instead, he was the bartender who taught my cocktail class. Afterward, I began going to The Gibson, even though I still believe the not-so-secret secret concept is tiresome. It was worth it for the show. Brown is as much an entertainer as a bartender. Every other drink was a minor pyrotechnics display, as Brown and the other bartenders squeezed citrus and fire across the tops of cocktails in the dimly lit lounge. Even the act of shaking a cocktail - an act as dynamic as it was loud - was a feat of strength and technique that captured the bar's attention. The craft cocktails scene was peaking in D.C. and Brown was starring at The Gibson.

The fact that he became such a renowned bartender even surprises him. Eleven years ago, Brown was just another aimless restaurant employee at Rocky's in Adams Morgan. Tired of waiting tables, Brown lied his way behind the bar claiming bartending experience he didn't have, slopped together a passable rum punch and began a new career. A decade after that miserable drink, Brown owns his own bar, married fellow bartender Chantal Tseng and GQ magazine declared his martini the best in America.

"My brother likes to say that if it wasn't for alcohol, I wouldn't have a job, a hobby or friends," Brown said.

Since his days at Rocky's, Brown went on to work as a bartender and sommelier around town, consulting with bars and restaurants on their beverage programs. He also began to study the art of cocktail making. Although D.C. isn't without a cocktail history, it's not New Orleans and it's not New York. With the exception of Sam Lek, of the former Town & Country, and Jim Hewes at the Round Robin, the city didn't have many great bartenders for the up-and-comers like Brown, Todd Thrasher of PX and Gina Chersevani of PS7's to turn to for guidance and advice. So they had to figure it out for themselves.

"We were students without teachers," Brown said. "So we learned things and figured things out along the way. Eventually, we got better and developed better techniques."

After his stint at The Gibson, Brown opened the bar-in-a-bar concept, The Passenger and Columbia Room with his brother Tom. The spaces couldn't be more different. Up front is The Passenger, black and grimy, with Iggy Pop blaring through the air and Tom and PBRs behind the bar. It's a laid-back bar that specializes in Tiki drinks on Tuesdays and an eclectic punk soundtrack all week. But make your way through The Passenger - with a reservation - and you'll find The Columbia Room, a quieter, apothecary shop of a bar that puts Derek and his cocktails on display.

Back at The Gibson, Brown's fellow bartenders would bust his balls about the folks who would insist on the seats that clustered around his end of the bar. But Brown knew he made good drinks and put on a performance, so he ignored the comments. At the Columbia Room, there's no need to grab a special spot at the bar, all 10 seats face Brown.

He calls it the fishbowl effect, and while it can be unnerving, he's used to being stared at as he goes about his work. Every 30 minutes, a few new people come in as a few people head out. A drink to start, a drink for the season, and a drink of your choosing. Three cocktails, paced slowly. Throughout the evening, Brown makes light conversation with the revolving cast of guests who've paid $64 each for the pleasure. And though he's the sole bartender of the Columbia Room, when it comes to that final beverage, his time is yours, whether that means making a martini or spending 15 minutes hand carving a block of ice into a diamond for a Scotch on the rock.

Then there are the things that he doesn't post on Facebook: the books he's working on (or trying to), the new bar projects he's considering, the consulting he's doing with Chef R.J. Cooper and Rogue 24.

Most people would be satisfied to own their own business and have a job they enjoy, but Brown is restless. All the extracurriculars, the writing, the consulting are stepping stones toward, well, something. While his goal isn't completely clear, all of it begins at the bar.

Brown wants to make a better cocktail. That's why he spends so much time tinkering with cocktails and thumbing through old recipe books. His martini, the one GQ liked so much, doesn't have a garnish. Why? He determined the sliver-thin lemon twist he once served with the drink made the beverage bitter. During our interview, the conversation took a tangent into bitters, which led Brown to tell me about The Meadow, his new favorite shop in New York that specializes in cocktail bitters, salts and chocolate, and to break out a few bottles to show me how good they were (they were). He did the same thing a few years ago when he discovered Fee Brothers bitters.

It's about refinement. It's about making the drink better.

For now, he's pursuing that drink at the Columbia Room. But he knows that in time, the broader fascination in craft cocktails will fade and only the cocktail geeks will be interested in his showmanship and his club. When the Columbia Room runs its course and the reservations stop coming in, Brown will move on to the next project.

He describes his long-term goal as positioning himself to be "patient zero for the good life." To create bars, beverages and a culture that celebrates the best parts of our drinking culture.

It's a vague goal, to be sure, but Brown's got a lot on his plate at the moment. He has to prepare for tonight's reservations at the Columbia Room, go over his next column for the Atlantic, touch base with a couple clients and wrap up out a few final details about an upcoming event. As he churns through his hectic schedule, that long-term goal might take shape, become a bit clearer.

For now, though, Derek Brown is busy.

what a great post! and very well written. I really enjoyed reading it.

Great cocktails, but overrated service. During our visit to Columbia Room, saw him drop a garnish, run it under the sink, and still put it on a rim. Also saw him pour 2 drinks made for my wife and I for another couple- in effect, re-using cocktails. So much for personalized attention and crafting drinks to your tastes.

Mark, That is just ridiculous. You are talking about a place that washes the ice before they make every drink, you can't name another place that does that. I haven't been to the Columbia Room more than a couple of times, but I'm pretty sure that Derek would be caught raping a monkey before doing something like that. You are clearly hallucinating. As far as recycling cocktails, did you want something made for you and no one else in the world? The place is known for classic cocktails. There's a limited list dude. That's just bs hatorade.

Totally agree. Whoever that dude is is full of crap.

Bryan, I stand by what I wrote. As far as recycling cocktails, we weren't looking for something original for just us and no one else in the world. What he poured us was great. It's just that he ended up pouring the "excess" for another couple instead of creating new drinks for them based on their own preferences.

I'll also clarify my garnish comment. The twist fell onto the bar as he was serving the drink. He ran it under the sink and put the same one on the rim. One would think that he would replace the entire twist. For a place that prides itself on attention to detail such as washing ice for every drink as you say, I just expected more from this bar as I would a 5-star restaurant. As I said, great cocktails, overrated service.

I think it's an indication of poor character to comment negatively on an article about someone and totally take that nice moment away from them, regardless of who this guy is. I'm sure that because of you he won't send this to his mom anymore. So you seem to me like a person who just dumps on things because he can, especially under a shroud of anonymity. Didn't you consider that he made four of the same cocktail because he was excited about that cocktail and wanted the people to try it too? Cause that wouldn't sound like a stretch to me.