IPAs And Indian Food: Like Peas And Carrots (In Mumbai) 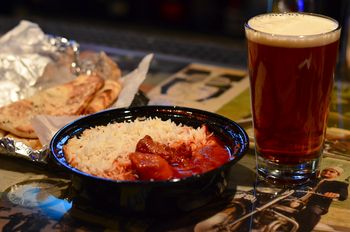 That last fact should be self-evident, but if it was Indian restaurants (at least the ones around here) would stick a few Loose Cannons, maybe an Avery IPA on the menu. But that's not the case. Instead, your beer options are limited to a redundant list of light lagers whose labels might invoke thoughts of India - Kingfisher, Taj - but are otherwise indistinguishable from the light lagers made in St. Louis and Golden, Colo.

To be fair, lagers have been the beer of choice in India for more than a century. In fact, lagers are the beer of choice in most parts of the world. There was a time, though, when bitter, hop-forward ales from England were all the rage on the subcontinent (and then the Indians booted out their British overlords and switched to the German stuff).

Travel to England today and you'll be hard pressed to find a pub that doesn't have curry on the menu. For a people known for fried fish and sausages, they have fully embraced an Indian staple as their own (thanks to their old Asian holdings). But travel to India, and the culinary cultural exchange doesn't stand up, at least where beer is concerned.

That's a shame because there may be no better beverage to pair with a spicy curry than a hoppy India pale ale.

As craft beer has become more popular over the past decade, so too has the idea that beer can be paired with more than burgers and pizza. Thomas Keller commissioned Russian River Brewing and Brooklyn Brewery to make special beers for his restaurants The French Laundry and Per Se. Here in D.C., Chef Eric Ziebold's tasting menu at CityZen has included a beer course, and Michel Richard imports the Belgian pilsner Blusser for his restaurant Central. And then there's Birch & Barley, which offers a beer pairing with each course of Chef Kyle Bailey's tasting menu.

Once the domain of wine, beer is being recognized as an ideal accompaniment to food. Garrett Oliver, brewmaster at Brooklyn Brewing and author of The Brewmaster's Table, has gone even further to say that beer offers a wider range of flavors and styles, making it the ideal accompaniment to food. (The Brewmaster's Table, as it happens, is a book about pairing food with beer.)

That may be true, but when it came to Indian cuisine, I never gave it much thought. As oafish at it may sound, I viewed curries and kormas as ethnic food made by people from foreign lands. So if the people running the restaurant wanted to offer a few light lagers with their dishes, so be it. Their food, their beer. After all, you go to Indique for the food not the drink. Well, a cold Fisherking may be common in Mumbai's curry houses, but it's not the ideal beer for the food. The ideal one might just be a California pale ale. (I know it's not an IPA. I'll get to that.) I got thinking about this particular food and beer pairing after reading Pete Brown's latest book, Hops and Glory. In it, the British beer writer explores the development of the IPA and England's colonization of India, and chronicles his journey from Burton-Upon-Trent (the birthplace of IPAs) to Calcutta with a keg of IPA in tow. It's a good book, and in it Brown makes the point that IPAs not only go well with Indian cuisine, they taste like they were made for it.

"[The IPA he brought from England] really was dangerously drinkable, and when the tandoori canapés came round it went beautifully, cutting through the heat and harmonizing with the spices so perfectly it was as if the beer had been designed specially to go with the cuisine, and perhaps it had."

That sparked my interest. While Oliver and other beer writers have made the point that IPAs can go well with very flavorful dishes and spicy foods, Brown's 450 page treatise on the matter convinced me to try the pairing myself.

Because Indian restaurants don't offer India pale ales, I conducted my tasting at the next logical location: the Iron Horse bar in Penn Quarter.

I like the Iron Horse, a lot. Not only does it offer a great selection of craft beers and is home to bartender extraordinaire Scott Stone, but it has a tavern license. What that tavern license means is that they don't serve food, so you can bring in food from anywhere. As long as you're drinking, that's no problemo. You can even have food delivered and never leave your barstool. That's turned the Iron Horse into my go-to bar for watching college football (Pattison Avenue and pints, people) and in this case, my go-to spot for lamb vindaloo and IPAs.

The vindaloo, which I picked up from nearby Mehak, was great. Chunks of lamb and potato swam in a pool of fiery red curry. It was delicious, and completely overwhelmed my pallet. The onion kulcha, a doughy flat bread filled with onions, was good, but no match for the vindaloo.

For the pairing, I ordered Flying Dog's Double Dog imperial IPA, which clocks in at 11.5% A.B.V.; Flying Dog's Snake Dog IPA, which comes in at a more modest 7.1% A.B.V.; Sierra Nevada Pale Ale (on the theory that English IPAs aren't nearly as high in alcohol as our IPAs), which runs 5.6% A.B.V.; and Sierra Nevada's new Juniper Black Ale, a hoppy 8% A.B.V. black IPA.

Of the four beers, the two with the lowest alcohol levels paired the best with the spicy Indian dish. The Double Dog (a personal favorite) was much too sweet for the dish and the heat of the vindaloo overwhelmed whatever hop characteristics the Juniper Black Ale had, making it taste like an ordinary stout. On the other hand, the IPA and pale ale were spot on.

Although the IPAs didn't compliment the curry in the same way the dark stouts compliment chocolate and coffee flavors, the Snake Dog IPA and Sierra Nevada Pale Ale stood their ground with the vindaloo. A dish with the much flavor and heat would turn a Taj to water, but the IPAs remained bright, hoppy and citrusy deep into the bowl.

Between the two beers, I favored the pale ale. Both went well, but the bitter bite from the Snake Dog and the spicy of the vindaloo were a bit much for me. The Sierra Nevada, though, was refreshing, and the subtler hop bitterness helped restore my taste buds between bites.

These results shouldn't have been surprising, even if they were. This food and this style of beer should be easier to find together, even if it's not. But the fact is, IPAs pair well with Indian food, even if you have to bring the food to the beer.

And if Indian isn't your thing or you want a few more pairing options, you could try Thai (which Scott suggested) or fried chicken (which my wife suggested). I think they're both right. If it's spicy enough or fried enough, it can be matched up with an IPA. Brooklyn's Oliver has suggested pairing IPAs with fried fish, Mexican and calamari. Point being, IPAs go well with spicy and greasy food. When it comes to pairing Indian food with beer, though, I don't think there's a better option than an IPA (or pale ale).

Umm, aren't IPAs "intended" for use of sea voyages, where the high alcohol would prevent spoiling. The Brits were brewing in India from early on, and their beers are excellent with Indian food. Think bud light. The problem with Indian beer (in India) is the weird preservative they put b/c of the lack of refrigeration.

The brits correctly understood that alcohol would reduce the danger of food poisoning (delhi belly) but you needed spirts, not wine/beer to kill the bugs. Think G&T.

Thanks for the comment, Charlie. Brown goes into great detail about this in his book. Without spoiling too much, the IPA style (higher ABV and all) was around before Britian started shipping it to the Indian colony, but it wasn't nearly as popular as stouts and darker ales. When Russia stopped buying UK porter, brewers needed a new market and the troops and colonists in India needed beer. So brewers started shipping the pale beer to India, which generally did well over the journey and was refreshing in the Indian heat. Eventually, the beer became so synonomous with the colony that it picked up the name India pale ale. I've read similar stories about the development of the IPA, but Brown's book goes into far greater detail.

If you go right down the street to Rasika they do have a great selection of craft beer, which does include IPAs.

You know I thought about that Rich, but in terms of price and ease to get in, Rasika is tough. While it very much is Indian cuisine, I consider it a different entity than the other Indian restaurants. Also, I suspect that the beers are on the menu more to appease their customers than because they pair well with the food. But if they do have IPAs and pale ales on the menu because they work well with Chef Sunderam's dishes, then hats off to them.

well, I don't really believe that story. Of course what the english ate in India during the 1700s was pretty bad -- it isn't Indian food at all. Certainly there was a gap (between the 1600s and 1800s) where beer would have to imported, but once it started to be made in India it developed its own characteristic.

Toddy is a fine morning drink, but Indian food is ok without alcohol.

I'm so glad to post my comments on your blog. I would like to appreciate the great work done by the web master and would like to tell everyone that they should post their interesting comments to make this blog interesting.