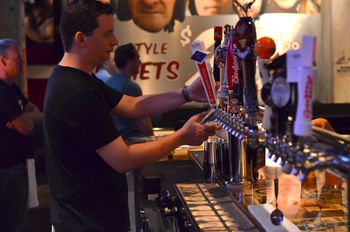 At approximately 6 p.m. on Thursday, September 1, Casey Brockman will walk to the line. The Murray State quarterback will look across the field to find Louisville’s stud linebacker Dexter Heyman, hoping to God the Cardinals’ won’t blitz on first. The 6’2’’ junior will lean over center Brock Rydeck, ignore the jeers of the Cardinals’ crowd, and demand the ball.

In all likelihood, it will be a bad day for Casey, Brock and the Murray State Racers, but an excellent day for the rest of us. Because on that day, when Rydeck snaps that ball and Heyman drives Brockman into the field of Cardinal’s Stadium, football will once again be with us (this NFL preseason crap doesn't count).

It’s been said that this game of grace and violence is our national religion. If that’s the case, then the sports bar is our house of worship. Being a fan of far-away teams (South Florida, Buccaneers), it took me a while to find a few decent bars and restaurants in the D.C. area to watch football. The region may be inundated with sports bars, but few offer the trifecta of great beer, good food and the promise of your team on the screen (unless you’re a Skins fan, in which case any Chili’s will do).

Well, friends, I’m here to help. Below are my top five bars and restaurants in the DMV to watch the faux-pros on Saturday and Pro Bowlers on Sunday.

1. The Black Squirrel: The Black Squirrel has three floors, 49 taps and 11 TVs (and if you call ahead, the third floor can be your private sports bar). Owner Amy Bowman keeps this Best Beer Bar stocked with a top tier line-up of craft beers, while the talented Gene Sohn runs the kitchen (order the burger). Is it a coincidence that on game days all the TVs are tuned in? Nope, The Black Squirrel was co-founded by former sports columnist Tom Knott. (Disclosure: I’m friends with Amy and Tom. Still, The Black Squirrel is a great place to watch football.)

2. Iron Horse Taproom: If the Iron Horse Taproom opened at noon on weekends it would be the best place in D.C. to watch football. The multi-level bar is big, filled with TVs, has a great selection of craft beers, and features the best menu in town -- by not featuring a menu at all. The Penn Quarter tavern (pictured above) doesn’t have a kitchen, so it allows patrons to bring in food or have it delivered. Want to dig into some Texas barbecue while watching the Lone Star Showdown? No problemo. Grab a pound of brisket from Hill Country or better yet, a burrito from Capital Q and head to the Iron Horse. How about some lamb vindaloo while you watch the John Beck/Rex Grossman quarterback controversy unfold this season? Mehak is just down the street. Just make sure your game doesn’t start before 5 p.m. If it does, you’ll need to head elsewhere.

3. Frisco Tap House: What’s more American than football? Excess. The Frisco Tap House has 50 taps, a beer engine, a table where you can pour your own draft beer, an extensive bottle and can list, great burritos and eight giant flat screen TVs (with more coming this fall). Sure, the Columbia, Md., bar is a hike if you live in Logan Circle. But if you live in Maryland, you have one hell of a place to watch football.

4. Capitol Lounge: This is where it started for me. When I moved from Tampa to D.C. in the late 90s, Cap Lounge was the only place in town I could reliably catch Bucs games. It helped that one of the bartenders was a Bucs fan and wanted to watch the games, too. The Capitol Hill bar continues to be a great spot to catch a game, with a mess of TVs tucked and hung throughout the two-floor restaurant, and a stellar selection of craft beers on draft and in bottles and cans.

5. Rustico: These days, it’s tough to write a story about beer without mentioning ChurchKey and its downstairs sister, Birch & Barley. But before there was CKBB there was Rustico, owner Michael Babin’s first crack at a craft beer establishment. While ChurchKey is unabashedly a beer bar, a fine one at that, Babin makes sure his two Rustico restaurants remain casual neighborhood spots, which makes them ideal for watching the game. Greg Engert oversaw the beer program at the original Rustico in Alexandria before heading over to ChurchKey, and continues to curate the draft and bottle lists for his original restaurant and the newer Ballston location. Although neither will be mistaken for a sports bar, the Rusticos have just enough TVs to catch most of the marquee games. And if the beer list and full menu aren’t enough to attract you, they’re offering beer specials as well. Beginning September 10, both Rustico locations will offer $3.50 cans of craft beer, including G’Knight, Dale’s Pale Ale, Old Chub and Ten Fidy (they clearly have a thing for Oskar Blues’ beers), and $2.50 cans of college beer (because you or your buddy don’t know better) during games.

In west KY we see it a bit differently. Of course, the Racers' Casey Brockman will not be under center, but will get the snap from shotgun. He will check down IF Heyman blitzes, getting the ball to NFL prospect RB Mike Harris, who takes it to the end zone. Just different perspectives. Murray State fans throughout the US will be enjoying the game over their favorite adult beverages, like our fellow college football fans in the DC area. Here's to a great football season for everyone. GO RACERS!

A loss for Louisville is a win for South Florida, so I'll be pulling for the Racers, msupigskin. Good luck.

Admittedly, it'd been a few months since I last visited Frisco Tap House. It's gotten better. I swung by the Columbia restaurant today to find that it now has two beer engines and a website that's linked to the digital beer menu that hangs in the middle of the bar. Check out beer.friscogrille.com to see what's on tap ... right now.

Informative posting. Thanks for sharing.