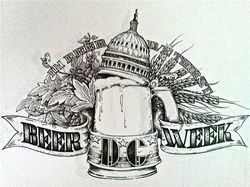 Ladies and gentlemen, get your livers ready, DC Beer Week will be kicking off on Aug. 14.

As we reported, this week-long celebration of beer (especially local beer!) will include events at the District's best beer bars. The complete list of events can be found on the DC Beer Week site (in partnership with the folks over at the DC Beer.com) and it's quite a list. To help you pick some of the best events for the week (though all look promising) here are my top five:

Founders Brewing Company co-founder Dave Engbers will host a food and beer experience, casting light on his fantastic ales. Beer Director Greg Engert will speak to the pairings of these great brews with a menu crafted by Birch & Barley Executive Chef Kyle Bailey and Pastry Chef Tiffany MacIsaac. This is a 5 course tasting menu that will be paired with 9 different Founders hand-crafted ales. Details of the menu are on the way and will be posted here when available. The dinner will be $75 exclusive of tax and gratuity. Call Birch & Barley for reservations. 202-567-2576.

2. Casks and firkins: All of them! (multiple events, multiple locations)

There are few things in life better than fresh, cask-conditioned beer. During DC Beer Week, there will be a lot of it. Rather than try and pick one event, I'm recommending all of them. Beginning Monday, Aug. 15, the Pour House will be tapping firkins through Saturday from Rhode Island’s Trinity Brewhouse, as well as great local beers from, Oliver Breweries, Evolution Craft Brewing, Heavy Seas, Old Dominion and Fordham. On Tuesday, ChurchKey will turn over all five of its beer engines to Heavy Seas. Because five cask ales is not enough, a sixth real ale will be served directly from a wood barrel previously used to mature bourbon. I tried a variety of Heavy Seas cask ales a few months ago at the brewery's Beer and Barbecue event. They were some of the best beers I've tasted from the Baltimore brewery. And on Thursday, District ChopHouse will be hosting local brewers and their cask ales. The lineup includes the ChopHouse, Capitol City Brewing Company, Rock Bottom Bethesda, Gordon Biersch DC, DuClaw, Franklin’s, Olivers/Pratt St Ale House and Sweetwater. Tickets are $35 and only 80 will be sold.

Few things go better with beer than whiskey. This event pairs a flight of rye whiskeys hand-picked by the Jack Rose staff with the B.W. Rye ale, a collaboration beer from D.C. brewers 3 Stars Brewing Company and Steve Jones of Baltimore's Oliver Breweries. Meet the brewers and enjoy a guided tasting highlighting flavor profiles and key characteristics of the spicy and flavorful rye grain, which is in so many great beers and whiskeys. The price for this will be around $20-25.

Granville Moore's Chef Maria Evans teamed up with Trinity Brewmaster Sean Larkin and Granville Moore's chef and co-owner Teddy Folkman to put together a five-course dinner featuring one of the beers she and Folkman brewed at the Trinity in July. Look for Evans' classic New England dishes, including sepia with milled malt and sorachi hop oil, a whole pig, and a bunch of other surprises, all with a Granville’s twist. Tickets are $70 per person. Reservations and more info at 202-399-2546 or www.granvillemoores.com.

Full disclosure: I'm a homebrewer and member of the DC Homebrewers club. I've tried a lot of these guys' and gals' handiwork, and let me tell you, they make good beer. If you don't believe me, come give them a try. The $10 ticket gets you entry into this homebrew competition at the Red Palace. There will be a DJ and the opportunity to taste beers from homebrewers all across the city.

It looks like the B.W. Rye ale being poured at the Jack Rose event on Aug. 16 is a collaboration beer between 3 Stars and Baltimore's Oliver Breweries. Yet another reason (if you needed one) to check out the event.