I'll preface this with the fact that I suck at baking. All of the things that make someone a good cook always prove to be the ruin of any aspiring baker. When I'm cooking a recipe and I'm missing something, I just improvise and use something else we have instead. But with baking, YOU CAN'T FUCKING DO THAT...and it drives me nuts. I hate working within boundaries -- I want to experiment, goddamn it! But baking is all chemistry, and you can't substitute white sugar for brown sugar and expect everything to come out the same. Science is a motherfucking bastard!

So with that, I believe I finally found a baking recipe that I can make and NOT fuck up. Hopefully this is the first of many to come that I'll write about here.

There are a lot of reasons to like this recipe. It's extremely easy -- mind-boggling easy. And it's a great way to use over-ripe bananas; which with three kids, we almost always have.

(Speaking of over-ripe bananas: peel them, throw them in a plastic freezer bag, and save them for when you want to make this recipe.)

But the thing I like the most about this recipe is that I can make a double batch of these and I have snacks for the boys' lunches for a couple weeks. Since these are mini muffins, they fit inside the boys' lunch boxes and I can include a couple or even three if I want to. A couple days after baking, I put them in a plastic container, freeze them, and they keep for a long time. Considering how much a box of granola/cereal bars cost at the grocery store (what's the latest cost of a box of 8 bars? $4? $5?), this recipe is a real money saver. Plus let's face it, our boys beg for them every night.

And with that, my Cinnamon Banana Mini-Muffins

Makes about 96 mini muffins (I know that sounds like a lot but trust me, they'll go quickly). 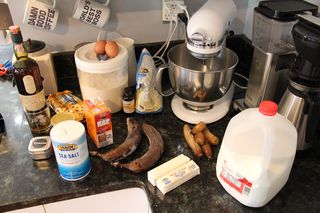 (Note, you may have noticed the bottle of Lagavulin in this picture and yes, drinking and baking go well together. I feel the cinnamon in this recipe pairs quite well with the flavors of the Lagavulin.)

Preheat oven to 350. Place racks in top third and bottom third of your oven.

Grease a non-stick mini muffin pan with butter or non-stick spray. (Because paper muffin cups are a pain in the ass. I promise they will pop right out when they're done baking.)

In a stand mixer using the paddle attachment, mix butter and sugar until completely blended, smooth and white. Start at a low speed and then increase to medium speed. It should look like this. 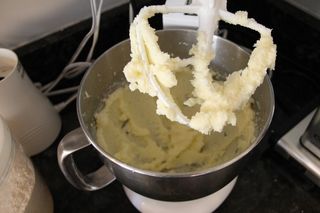 Add the mashed banana to the mixer and mix until blended. But don't beat it to death. Some large banana chunks are good.

Add the eggs one at a time, vanilla, and milk until blended. This takes roughly 30 seconds to a minute. 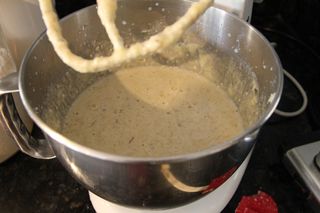 Reduce the speed of the mixer to it's lowest setting and mix in the dry ingredients. DON'T OVER MIX. Only mix until it's just blended and turn off the mixer. Add in the chocolate chips and mix for a few seconds until evenly distributed. 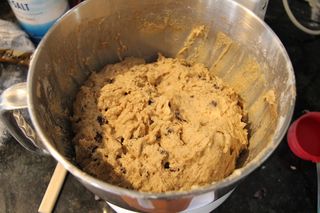 Using an ice cream scoop (4 mm is just the right size or roughly 3 tsp), place a heaping scoop in each cup of the prepared muffin pans. 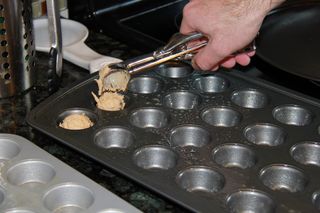 Place the filled muffin pans in the top and bottom racks of the oven and cook for 6 minutes. At the end of 6 minutes, swap the rack and cook for another 6 minutes or until a cake tester comes out clean and the tops are golden brown. 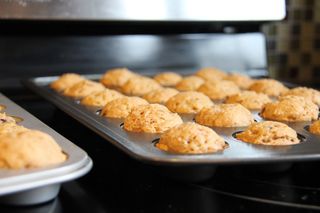 Remove the pans from the oven and let cool for a few minutes. Then remove the muffins from the pan and move to a cooling rack if you have one.

Eat what you want, and then stack the rest in plastic containers to keep fresh. They keep fresh for a couple days and then you should freeze them. 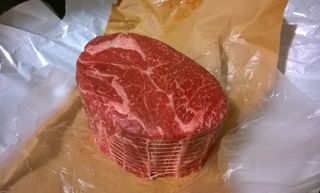 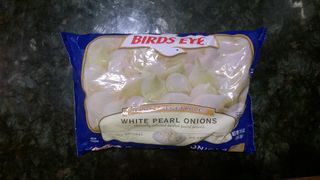 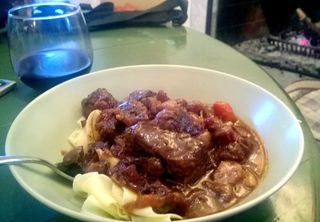 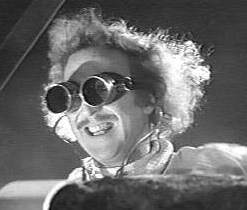 Yes, it's happening! I'm bringing this site back from the dead almost 3 years from the last time anyone posted. I thought I was done with DCFoodies and came very close to shutting it down completely, but there's just something about the holidays and cooking that really made me miss sharing my experiences in the kitchen with everyone.

Rather than writing about restaurants, which Amy and I almost never go to anymore (at least not new ones anyway), this blog will be focused on cooking and baking. That's what I spend most of my free time doing and besides, we can all cook better food than we can get at most restaurants anyway.

I will be putting ads back to the site soon and as usual all the proceeds from the ads will go to some local hunger or food-focused charity. If any of your are interested in contributing and helping generate money for those charities, I'm always open to having guest writers or other columnists.