Salmon with Lentils and Mustard Herb Butter, or What I Call, Butter Up Your Wife Salmon

Salmon is one of the easiest and most versatile fish to prepare. You can fry it, grill it or smoke it, and it's pretty hard to ruin it. Of course, there's always a danger of overcooking it, but even then, if you use the right technique it's going to come out pretty good. 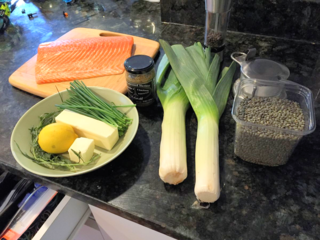 I've been making this salmon recipe from Epicurious about once a month for the last two years. It's "healthy," at least from my perspective since it's fairly low carb and high in protein, and it's been a go-to recipe of ours since we started eating healthier. For a while, I was just frying it on a pan over high heat like the recipe calls for, but then one night, when we were having some friends over, I bought some wood planks and discovered the magic of smoking the salmon on my gas grill. 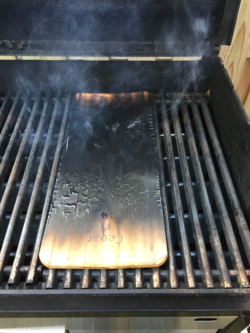 It happened completely by accident that I figured out the right way to cook salmon on a wood plank. I did the precursory soaking of the plank for two hours. Then, after heating up the grill on max heat for a good 10 minutes, I put the planks on the grill and let them sit…for a while. Too long, at least at the time I thought it was too long. I was in chatting with our friends when I suddenly it occurred to me, "Shit, the planks!"

I ran outside to the grill and the sides were flamed up. I put out the flames, and flipped the plank over and slapped the salmon down. I reduce the heat to medium but keep the planks on the hot side of the grill. The plank was smoking like crazy but it never flamed up again since it had soaked for a long time. The result was an intensely smoky flavored salmon with a perfect buttery texture. Ever since then, I let the planks catch fire and put them out before placing the salmon on them. After the first bite, Amy and I looked at each other with that Holy Shit Is This Not The Best Fish You've Ever Eaten look.

(legal disclaimer: This site is for entertainment purposes only. If you listen to me, you're an idiot. Do NOT let your wood planks catch on fire.)

10 tablespoons unsalted butter, softened in the microwave for 10 to 15 seconds. It's important to NOT melt the butter. Only soften it to a point where it can be mixed)

1 leek, white and pale green parts only (the original recipe calls for 2, but I just think 2 is too much)

1 large hickory or cherry plank (most grocery stores have them, but you can order them on Amazon in bulk for a lot cheaper)

Two hours before you start cooking, soak the wood planks. (If I could tell you the number of times I forget this step…)

You can make the mustard herb butter as far ahead as you want. (I sometimes quadruple this because I actually will use it as a replacement for butter in other recipes) 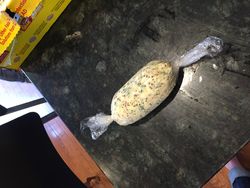 Stir the ingredients for the herb butter together in a bowl until thoroughly mixed. Spoon onto plastic wrap, then roll into a tube. Twist the ends until you have a nice log of compound butter. Place in the fridge until ready for use.

To cook the lentils. Bring the lentils, water, and 3/4 of a teaspoon of salt to boil in a medium saucepan.  Once boiling, reduce the heat to low and simmer for 20 minutes. After 20 minutes, check the lentils. They should have some bite to them but not be chalky. If you cook them past this point, they'll get mushy. I don’t think I've ever cooked them past 22 minutes. This is not lentil soup we're making here after all. Once the lentils are cooked enough, reserve 1/2 cup of the cooking liquid and then drain the lentils. 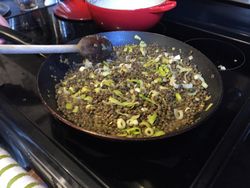 While the lentils are cooking, chop the leeks, rinse them in a colander, and cook in the butter on medium-low heat until tender. About 10 minutes. Keep the lentils warm while you cook the salmon.

Add lentils, reserved cooking liquid, and 3 tablespoons of the compound butter to a large fry pan (I use the cast iron skillet). Add the lemon juice and season with salt and pepper to taste.

Heat up the gas grill on high for 10 minutes. While you wait, relax and have a beer. If you have a charcoal grill, good luck my friend. Have a couple beers.

Once the grill is ready, place the SOAKED (can I stress this enough?) wood planks on the grill. Leave the grill on high. Check on the wood planks often. Once the planks start to smolder, flip them over and reduce the heat to medium. Season both sides of the salmon generously with salt and pepper (I'm talking a huge pinch per side of the fillets). Place the salmon on the wood plank(s) and cook 120 degrees in the middle (basically medium), about 10 minutes. (Please use an instant read thermometer because I frankly don’t keep track of the time.) Once done, remove from the planks with a spatula and cover with foil until ready to serve.

To serve, place a salmon fillet on a serving of the lentils and top with a slice of the mustard herb butter. 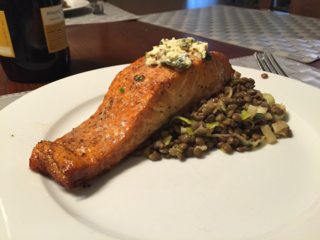