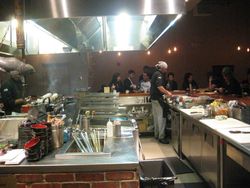 Last March, Kushi opened its doors in the Mount Vernon Square neighborhood, and brought a new kind of restaurant to Washington DC -- the Izakaya. An Izakaya is a sort of Japanese gastropub, a drinking establishment with a wealth of small plates, suitable for mixing, matching and sharing with friends over a few glasses of sake. It seems owners Darren and Ari Norris have hit upon a recipe for success, with their young sushi bar being called "the year's most exciting restaurant" by Washingtonian Magazine, and ranked 22 in their much vaunted "100 Best" list. It took awhile, but late last month, I was finally able to make the trek over to check it out.

First of all, Kushi wins big points on personality and presentation. Coming through the doors on a frigid night, we were met by a blast of warm, savory smelling air from the giant central kitchen. The space is bustling, but pretty wide open, dominated by the open kitchen / sushi bar, with a smaller bar area and several tables placed in its orbit. The fun and lively atmosphere is accented by the hectic but disciplined kitchen, which is a great show in itself, with the chefs slinging maki and stoking the wood and charcoal fired grill. The staff worked well and cohesively through the night; while there was the occasional bit of confusion, all the servers and runners were very friendly, and happy to field questions or just shoot the breeze. 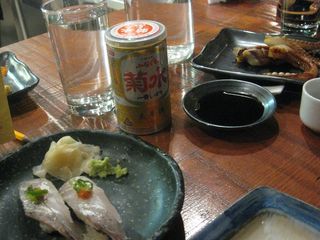 In addition to a handful of draughts and a decent wine list, Kushi has an extensive sake list, with some 15 sakes available by the bottle or carafe, and five different plum wines, to boot. It looks like they are working on developing an innovative cocktail program, too, which may be something to keep an eye on. 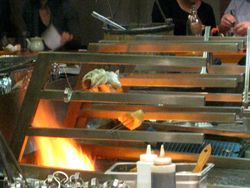 The food menu is so huge as to be a bit overwhelming. It is split into several sub-categories, reflecting the numerous styles of cuisine available, including the full range of sushis, Robata (wood grill), Kobachi (small plates), Gohan (rice and soup) and Kushiyaki (Charcoal Grilled Skewers). Frankly, I wish I had gone with more people, for being only a party of two, we could only try so much. Of course, we made a valiant effort, and did try SO much, so I'll just hit the highlights for ya.

The sushi was, across the board, of very high quality, and very well cut. The seared fatty salmon was melt-in-your-mouth soft, and served up nice and warm; the uni was clearly very fresh, and not nearly as fishy as some I have had. I was a bit disappointed that they were out of every variety of toro, but the Japanese swordfish we had instead was well textured, and also quite fresh.

One of the best features of the night was the special Chawanmushi, a soft egg custard made with mirin, mushrooms, and seafood. The texture was exquisitely silky, and the flavor an ethereal mix of subtle fishiness, a salty / sweet contrast, and earthy mushroom undertones. I believe they change this one up on a weekly basis -- in any case, for $7.00, this is a dish well worth trying. 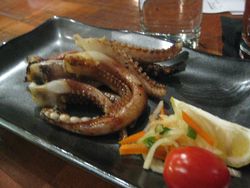 The grilled items were a mixed bag. While the grilled oysters we had were perfectly cooked and delicious, the clams were overcooked and rubbery. Likewise, the grilled squid legs, while pleasantly crunchy on the edges, were tough and rubbery otherwise. We also tried the grilled chicken livers and found  them overly grainy, another sign that what we were served had been overcooked. Finally, we sampled the grilled okra and leeks, which were good, and a novel approach to vegetables, but not much of a bargain at the price -- $3.00 per small portion, versus $6 to $10 for the more sizable meat plates. 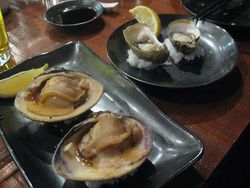 All in all we had about 12 plates and three drinks apiece, and the bill came to just over $100.00. Not too shabby for a night out for two. Despite the hiccups in the grilling department, we had a great time, as the staff and atmosphere go a long way. If you can gather up a small group of adventurous eaters and drinkers who like a good time and don't mind the occasional failed experiment, get yourself to Kushi early and see if you can stake out some bar-space.