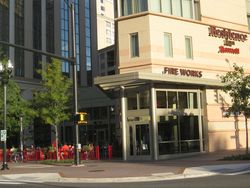 It was out with the old pizza and in with the new in the Courthouse last month. Sadly, after many years of selling classic Italian-American fare, Listrani's has closed its doors for good, with its location being taken over by nearby Chez Manelle and converted into a hookah bar. Old-style Italian eateries are on the outs in metropolitan Northern Virginia, and are rapidly being replaced by cutting edge, trendy pie joints like Z Pizza and American Flatbread. The most recent addition of this ilk is Fire Works, a high-concept pizzeria and beer bar, which recently opened up in the Marriot Residences on Clarendon Boulevard. 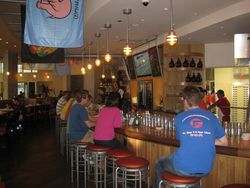 Fire Works is an expansion from the original Leesburg location of the same name, a local fav known for its sizable beer list and wood-fired, toppings-loaded pizzas. I have visited the new location two times since their opening back in late August. The space is pretty big on the inside, with a sizable 25+ seat bar, and some 60 or so seatings in the spacious, high ceilinged, diner-meets-trattoriaesque main room. Surrounding the building on two sides is Fire Work's HUGE patio space, which I roughly estimate could seat 60 to 80 guests comfortably. Both times I visited, the place was decently full, but not packed, so our party was seated promptly.

In the drinks department, Fire Works has a lot of options. In addition to some 30 beers on draught (including one "real-ale" cask), they offer 10 or so wines by the glass, including several from Virginia, in the range of $7 to $13 per glass, and a two-page beer bottle list. Though the draughts are impressive in number, I was rather disappointed by the 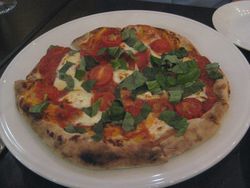 selection; everything was kinda run of the mill. Flying Dog IPA, Victory Lager, Bell's Two Hearted... they had a lot of the usual customers, many of which overlapped, and could have been excised for something a bit more esoteric, or perhaps a seasonal beer, which were completely lacking.

Between our visits, there were some major changes made to the food menu, which they openly admit is a work in progress. Generally speaking, the menu features an array of 15 specialty pizzas, wood-oven fired, and available at 10" or 14", along with a smattering of salads, sandwiches, and starters. 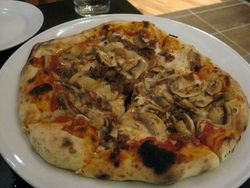 On our first go my companion and I split the small Classic Margherita ($11), and the small Sopranos ($11), which featured "Mushrooms, Wood Roasted Onions, Nitrate Free Sausage, Organic Tomato sauce, Cheese and a Dash of White Truffle Essence." Though the outer crust of each had that chewy / crispy  combination that lovers of the Neopolitan style exalt, the rest of the affair was kinda lacking. The Sopranos fell into that trap as so many truffled foods, allowing the oil to overpower every other ingredient in the dish. Where the Sopranos was overly rich, the Margherita was just kinda "meh," offering up little kick from the basil, and very little flavor from the mozzarella. Both were also unfortunately wet in the middle, making them difficult and a little unpleasant to eat. 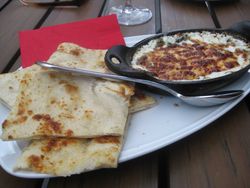 Our second visit also started out on the disappointing side. This time, we sat on the patio, which was lovely, and started with the Spinach Dip ($7), which was not. Though beautifully toasted on top and well presented, the cheese itself was mealy and flavorless, as was the accompanying garlic bread. That said, the main course was a lot more appealing. My friend got the small Segundo ($11), a white 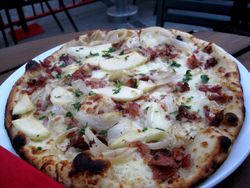 pizza topped with "White Sauce, Crisp Bacon, Smoked Mozzarella, Granny Smith Apples, Roasted Onions and Parsley," which had a delightful combination of sweet and salty flavors, and an appealing combination of disparate textures. This time, the pizza was also consistently chewy and firm, so they seem to have fixed that problem in the interim. For my main I eschewed the pizza for the " Three "g's" Grilled Cheese" ($7), a  combination of smoked g ouda, goat cheese and gruyere on crusty Italian bread, served with tomato jam. This sandwich was outstanding, with all three cheeses adding something to the mix, the bread of perfect texture, and the tomato jam a wonderful tangy/sweet accompaniment. Though I was puzzled when I was told the sandwiches come with pasta (they do not), I quickly got over it.

Regarding the menu, I should also note that Fire Works does not offer you the option of choosing your own toppings -- it's their way, or the highway. This was not the case on our first visit, and when I asked the server about it on the second go, he said this option was removed because it "caused confusion in the kitchen."

Fire Works is definitely a work in progress, but I have high hopes. Prices are generally reasonable, and though the food has been hit or miss, the preparation definitely seems to be improving. Also, though the beer program is rather weak right now, having 30 draught pulls behind the bar could open up tons of possibilities to the right program director. All in all, Fire Works has a great infrastructure in place, and I really hope they live up to the potential. Though, with Rustico -- a known quantity in the beer and pizza world -- opening up a location in nearby Ballston, they better step up their game quick like.