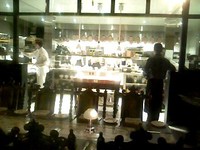 I love places with beer lists, because I don't know anything about beer and there's always something new to learn. In my four trips to Brasserie Beck, I've learned a few things. First, Belgian beer rocks, each beer has a special oddly-shaped glass to be served in, a gueuze goes great with oysters, and Chimay is pronounced she-may (I'm looking forward to learning more in my future trips). Brasserie Beck is beer snob heaven. The very bright and very crowded bar (unless you get there before 6) is a haven for people looking to relax after a long day at the office. It's understandable why it's such a popular happy hour spot, but it's not just the beer you should go to Brasserie Beck for -- hell, you just might also want to eat some food. 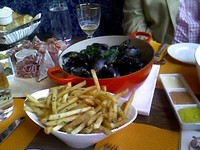 I'd recommend both the leek and potato and pea and veal meatball soups. A sinful liver parfait I'll never tell my doctor I ate is going to be hard not to order again and the oysters are amazing. On my last trip we had Olympia and Stellar Bar oysters. Please, I beg you, don't order the Stellar Bays if they have them because I want them all to myself!

The mussels are for true mussel lovers. If you like the little tiny mussels that other places serve, don't be surprised when you get a plate of the giant meaty mussels at Becks. They come with a bowl of skinny, parsley-coated frites and a trio of flavored mayonnaises.  This dish is a meal on its own and a steal at $17. 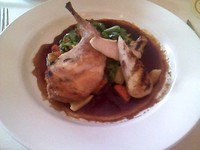 With the entrée selections a Brasserie Beck you can take a lighter approach or continue your gluttonous descent. On the lighter side, the curry salmon, with its milky yellow curry sauce, could've used some heat, but still very tasty and was one of my favorites. On the richer side, the lamb shank is falling-off-the-bone tender, but the rabbit is my favorite dish of all with meat that was probably the most tender of any meat I've ever eaten. Those of you that won't eat rabbit because it's a cute little animal don't know what you're missing. I found the entrées to be a very good value given the generous portions.

I've had mixed experiences with the desserts, but that's usually the case with me. The pear tarte tatin I thought was too buttery and came off greasy which is not exactly what I'm looking for in a dessert after a large meal. The caramel cheesecake, on the other hand, was just what I love in a cheesecake - moist but not runny, cakey but not dry.  I like that the caramel sauce was applied with a light touch too. 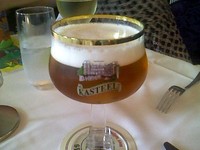 Overall though, I wouldn't say that Brasserie Beck serves food that's amazingly better than other good French (or Belgian) bistros like Bistro du Coin, Bistro Lepic, or Montmartre, but what I think makes it stand apart is the service. Each time we were there the service was very good and the servers, bus persons and expediters all were very attentive and knowledgeable about the menu. On your way to your table there won't be a single person that you pass working for the restaurant that won't smile and say hello. The pacing of the food can be a bit slow, but there are worse things that can happen.

Details:
Dress Code: Casual
Parking: Valet is $7 but has a tendency to back up. There isn't much street parking in the area but sometimes you're lucky enough to find a spot.
Smoking: Not Allowed.
Closest Metro: Metro Center, McPherson Square, Mt. Vernon Square
Reservations: Taken and recommended.
Baby-Child friendly rating: 3 diapers. Plenty of high chairs and they have a nice way of seating you in the back room with your child which is better for you and everyone else.