After having the barbeque salmon special at Raku last week, I've been on a manhunt for a good recipe for barbeque sauce that's adequate for topping on seafood and I think I finally found it. The sauce is so rich and aromatic that I could smell it outside my house. Check out the recipe if found on Epicurious here. It's very quick to make assuming that you have all the ingredients ready.

The only modifications I made are using 50% clover honey and 50% lavender honey (it just happened to be the kinds of honey that we had in the cupboard), and I used a combinations of Anaheim, jalepeno, and serrano peppers instead of just jalepenos. I really think the clover honey made quite a difference in the recipe as clover really added some kick to the flavor, and the aroma was enhanced as well.

Nothing says Spring to me like fava beans. Inspired by some of the dishes I've been having at my favorite restaurants, namely a fava bean, radish and red pepper pappardelle at Komi and the fava bean crostini at 2 Amys, did a little experimenting over the weekend with fava beans. I figured some of you might benefit from what I learned.

Just so you're aware of how clueless I actually was...for the longest time, I thought fava beans were the same thing as lima beans. I know. Silly me. Those chalky excuses for vegetables my mother force fed me growing up are nothing like fava beans -- at least as far as taste goes.

Once I finally figured out what they look like, I was able to identify them in the grocery store. Both the Balducci's and the Whole Foods by me have them, but I've found that the quality of the ones at Balducci's were a bit better - the beans were fuller and more mature where the beans from the
Whole Foods seemed like they were picked a bit early. I was more successful at picking out better beans when I felt the shell for fullness -- that seemed to mean that the beans inside were more mature.

Also when shopping, keep in mind that 3 lbs of beans in their shells will yield about a cup to a cup-and-a-half of shelled and de-skinned fava beans, so pack that bag at the grocery store full, because you're going to need a lot of pods. The beans ran about $2.50 a pound.

These were the fava beans that I bought at Balducci's after I shelled and cooked them for 4 minutes in boiling water. 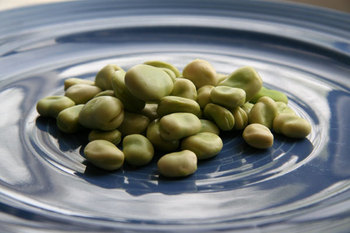 After you've shelled them, you need to peel the tough skins off the fava beans. It took me a little while to figure out where the skin ended and the bean began. The skin is actually a couple layers -- I peeled the outside skin off a couple of beans before I figured out that I was performing a task much more difficult than it needed to be. I was being way to careful.

You can use a knife or your fingers, but all you have to do is slice into the skin and then it's easy to squeeze out the bean inside. 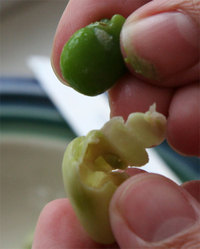 Amy and I spent about an hour or so peeling the beans. We had a good time with it, had some wine and cheese, and watched a few cooking shows looking for recipes to use them in. After all that, here's the finished product. 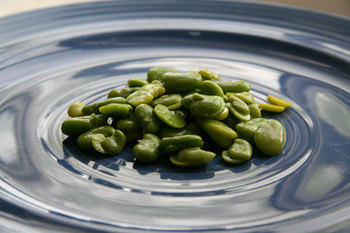 I know, not much huh?

But, that ended up being enough for about 35 raviolis that Amy and I made using this recipe (I know, I'm ambitious aren't I?), which said that "peeling the beans before cooking them prevents gases from being trapped between the bean and the skin that could cause discoloring." I didn't notice any difference in the color between when I peeled off the skins before or after I cooked them. Maybe I was just lucky.

Yes, I do actually cook once in a while. I've been TIVOing The Food Network lately, and this recipe was on the other day. When I saw how easy it looked to make, I figured what the hell?! One of my favorite things to get at a restaurant is a whole roasted fish -- my favorites being at Komi and Dino. The other day when I was at BlackSalt, I saw some whole seabass sitting in the cooler for $7.99 a pound, so I figured I'd try to make some myself. I modified the recipe slightly, but to put it simply, the fish came out totally kickass!

The first thing I changed was adding a egg white and salt coating to the fish. a friend told me that at his restaurant this is the technique that he uses, so I figured that since it was one of my favorite whole roasted fish to get, that I'd try it. I also added garlic to the fennel, onion and rosemary stuffing of the fish which I doubt made a difference, but I love garlic! And, don't even bother with the "sauce" on the side with the leftover fennel, onion and lemon juice -- you don't need it at all. Just dump some salt (and when I say salt I mean sea salt or kosher salt, not that iodized crap), extra virgin olive oil, and lemon on top of the fish before you serve it, and you'll be set.

Other than that, I didn't change much, although I did take the fish out of the oven after 30 minutes instead of 40 minutes. Overcooking a whole fish would completely ruin it. And, I didn't make any sides because both me and Amy had a whole fish each and that was basically enough for us. Amy and I were both moaning at how good this was. I'll definitely be making it again soon.

For wine, we had a very nice Spanish 2004 U Mes U Fan Tres Rose, that I picked up at the local wine store, to celebrate this incredible weather we've been having. I thought it went OK with the fish, but I think a Sauvignon Blanc, Muscadet, or Soave would gone much better with it.