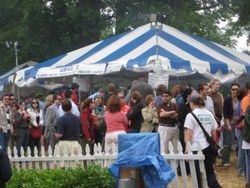 Being the EU's deadbeat debt-dodgers du jour, the Greeks haven't been getting a lot of love lately, making me all the more grateful for the love they have been sending our way this spring. For it is Greek Festival season once again, when Greek Orthodox churches around the country break out the stripy tents and roasting spits and make with the Bacchanal (or is Dionysisal for the Greeks? Whatever.). If you spend any time traveling up and down Wisconsin Ave, you no doubt will have seen the large banner advertising St. Sophia's festival, which took place a couple weekends ago; some friends and I swung by that Saturday. Though lacking in the rides and pig-racing departments, the event had a carnival atmosphere, with an unsurprising Greek twist. Along with the obligatory sand art and crafts for the kids, there were dozens of vendors, hawking everything from fine art to garage sale rejects (I got a wallet of dubious origins for five bucks!). In the main tent, a band played and sang songs in, presumably, Greek, while patrons danced and milled about the silent auction tables. 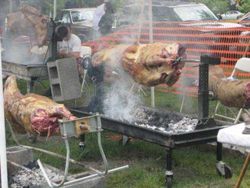 Of course, the central focus of any such festival is the food. The smell of roasting lamb permeated the entire outdoor space, and rotating spits cooked the meat for the thousands of gyros they must have sold that weekend. Greek beer and wine flowed freely, featuring the classic retsina, a distinctive Greek wine flavored with pine resin. Since we made the intelligent decision to arrive at 5:00 pm, the hot food line was just too long a wait -- thankfully, there were several vendors selling the innumerable, delightful pastries for which the Greeks are known and loved. We got the obligatory baklava, and a dozen of these great honey-coated donuts called loukoumades me meli, which were being fried in huge batches throughout the festival. 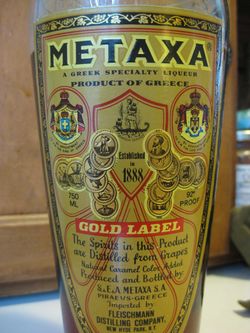 The best part about the whole affair was that I bet on something in the silent auction, and actually won! The prize in question was an old-ass bottle of Metaxa "Seven Star," and 22 pieces of something called "Galaktoboureko," a custard filled pocket of phyllo dough.

Metaxa is a Greek brandy producer, who are probably most well known for their whimsical bottles. I had never thought to pick up a bottle before, so I am glad fate kinda through one in my lap. The Star Series (Three, Five, and Seven) are barrel aged brandies mixed with a portion of sweet white wine. The end result is something like a tawny port, with lots of old, dried fruit flavors and some spice and honey, but drier, and with a good deal more kick, coming in at 92 proof. I have heard that the Three and Five Star are similar, with the Five being a bit drier, and that all are now cut to 80 proof.

The galaktoboureko is much less dense than it's more well known cousin, baklava, though similarly flaky. The sauce is not overly sweet, and has an interesting contrast of spicy cinnamon and citrus flavors, both of which compliment the creamy custard center. The spicy aspect is amplified when served with the Metaxa, whose mild sweetness mirrors well that of the pastry. Very tasty! I consider the gamble a rousing success.

Want to recreate the experience at home? Metaxa products are available at most comprehensive liquor stores (ie, Schneider's, Ace Beverage, Calvert Woodley, etc), and should run you between $20 and $40 a bottle, depending on your selection. And here is one of the simpler recipes I could find for the pastries. 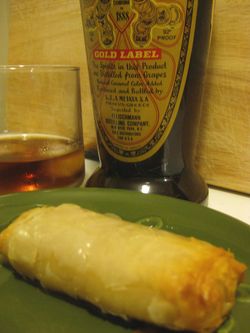 In a saucepan over medium heat add milk, sugar, semolina, 2 ounces butter, vanilla, salt and a sliver of lemon peel. Bring to a boil, whisking constantly, until mixture thickens. Remove from heat and allow to cool slightly.

Beat eggs in a separate bowl then stir into milk mixture. Set aside. Preheat oven to 350 degrees.

Meanwhile make the syrup; In a small saucepan combine the sugar, water, lemon juice, cinnamon stick and sliver of lemon peel and boil for 10 minutes. When Galaktoboureko is done and still hot from the oven, spoon syrup over a little at a time until absorbed by the pastry. Cool completely, cut into diamond shape and serve.

This is best made the day before it is needed. It gives the pastry time to absorb the syrup and the filling to become firm.

Assuming you aren't feeding the cast of My Big Fat Greek Wedding, the twenty-odd pastries yielded from this recipe are gonna last you awhile. They freeze well, and can be reheated at 350 for about 10 to 15 minutes. The sauce keeps fine at room temperature. 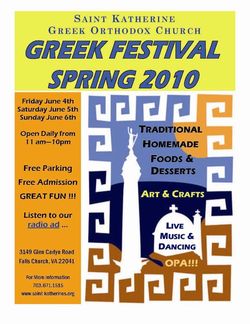 Of course, if you don't feel like running your oven for an hour in 90 degree heat, I guess I can't blame you. Fortunately, there are several local Greek festivals coming up in June, so you can get yourself a smaller, more concentrated dose of Greekiness, with less effort. Get your Opa! on the weekend of June 4th at St. Katherine's out in Falls Church, or check out The Greek American Directory's comprehensive state-by-state list of upcoming festivities.

Chef Peskias is renowned for his modern interpretation of Greek classics at 48 The Restaurant in Athens.  Trained in France, Spain and the U.S., Peskias has garnered international attention for his cooking. Accompanying Peskias will be his Pastry Chef, Theodoros Moisides. Moisides-inspired desserts will include yogurt and mastic panna cotta with strawberries and rose water sorbet and chilled fig soup with thyme, walnuts and yogurt sorbet.

Of course, no Greek festivity would be the same without ouzo. Santorini's Lava, a bloody mary with ouzo, promises to be a great way to start any meal. Fights of wine will also be offered for $25.

The public is invited to the kick off of The Greek Modern Festival at Zaytinya on September 8th, from 6 p.m. to 8 p.m. Join Chefs Peskias and Moisides for Greek wines and inspired hor d'oeuvres. Reservations can be made by calling Zaytinya at (202) 638-0800.

Saint Sophia Greek Orthodox Cathedral of Washington D.C. will hold their Annual Fall Greek Festival from September 26th through September 28th, 2008, from noon until 9 p.m. each day. The festival will be on the grounds of the Cathedral at 36th St. and Massachusetts Ave., NW. Saint Sophia's will offer authentic Greek food and pastries, including an indoor buffet, outdoor grills serving souvlaki, gyros, calamari and feta burgers, whole spit-roasted lamb, and apparently, no booze. A large Greek market will also be there for the enthusiastic foodie who wishes to create Greek delicacies at home.