I recently moved to the Columbia Heights neighborhood, so I was itching to explore the markets in the area.  You can just imagine my gleeful joy to find out there was not one but TWO farmers markets within a short distance of my new digs that I've never visited.  And as luck would have it, both markets had their opening days this past weekend.  So on Saturday morning, my foodie friend Brian and I ventured out in the rainy weather to check out opening day at the Mount Pleasant Farmers Market.  Located in Lamont Park, the Mount Pleasant Farmers Market is a producer only market in its sixth year.  Growing from a very small neighborhood market, the Mount Pleasant Farmers Market welcomes four new vendors this year:  Atwater's Bread, Cherry Glen Goat Cheese Company, Painted Hand Farm (a veal and goat meat vendor) and Groff's Content Farm (a purveyor of lamb, beef, pork and some poultry upon order). 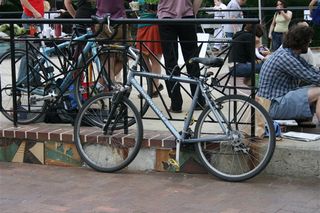 Before joining up with Brian, I quietly walked around the outside of the market taking pictures and observing.  This was definitely a neighborhood market.  People were catching up with friends, talking about the latest news in Mount Pleasant and chatting amicably with the vendors.  Unlike some other markets in the DC area, there was no rushing around or vendors hurrying up customers to get to the next person.  Market coordinators were on hand to answer questions and point out new vendors.  I also noticed a bunch of people with bikes on the bandstand in the park.  Curious, I learned the market was now offering a free bike clinic to its customers.  The clinic not only provides bike repairs, it also provides tips to keep your bike running smoothly in the city. 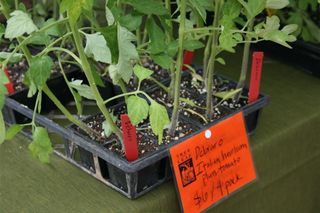 My first stop was at a familiar favorite, Keswick Creamery.  As usual, Keswick had a variety of their cheeses available to sample.  Their vermeer variety is one of my favorite cheeses, not only because of its flavor but also because it melts smoothly. I picked up a small block of the vermeer and moved along down the market.  There were several vendors with plantings for the garden, including both herbs and tomato plants.  I have been toying with the idea of creating my own container garden of herbs on my new balcony, so I have been price comparing herb plantings at the various markets.  Tree and Leaf Farm, Audia's Farm and Richfield Farm had herb, flower and vegetable starts available at prices ranging from $3 per herb plant to $6 for a four pack of tomato plants.  At Audia's Farm, I overheard Kathy Audia giving suggestions on the best mix of herbs to use for container gardens.  My ears perked up because of my own container garden aspirations.  I tucked away Kathy's tips and decided I would come back to her for advice when I was ready to start my own herb garden. 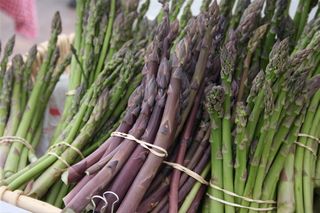 We moved along noticing the abundance of asparagus around the market.  The mini heat wave a few weeks ago apparently were a boon for the asparagus crop, bringing forth a huge amount of one of my favorite vegetables.  Both Truck Patch Farm and Richfield Farm had buckets full of asparagus, both green and purple.  Every year I practically gorge myself on asparagus when it's in season, so I happily picked up several bunches from Truck Patch.  Truck Patch also had free range eggs at $5 a dozen.  I noticed the eggs were in commercial containers, so I asked if the eggs were their own.  I was assured the eggs were in fact from their own farm, but to save costs and reduce waste, they used commercial containers recycled from consumers and other farms.  I was also told in the next few weeks, I could bring my own containers for eggs.  The idea of reusing my egg containers appealed to me greatly, so I made a mental note to bring my own next time. 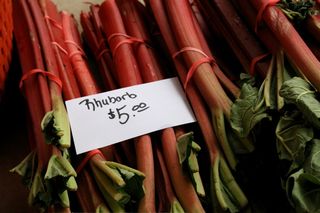 I also picked up some of the first rhubarb of the season from Richfield Farm.  The rhubarb was vibrantly red and sturdy, unlike the rhubarb I have seen lately in the grocery stores.  I normally only use rhubarb in conjunction with strawberries, but I have been dying to try my hand at a rhubarb pie.  With that in mind, I asked the young lady at the Richfield Farm stand how much I would need to make a pie.  She admitted she wasn't that much of a baker, but ventured a guess that I would need two bunches to make a nice pie.  Richfield also had spinach and scallions, as well as some lovely hanging baskets of flowers.  The baskets were bursting with color and I was tempted to pick up one or two for my balcony.  But considering my less than stellar history of taking care of flowers, I opted against it. 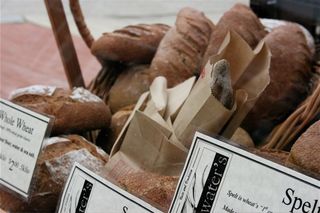 I was quite happy to see that Atwater's, one of my favorite vendors, was now available within walking distance.  Although it was their first day at the Mount Pleasant Farmers Market, there was still a good variety of their breads and baked goods.  Brian picked up a large loaf of their Country White with the intent to toast it with some of the cheese he picked up at Keswick.  As usual, I picked up my morning treat of Atwater's Fruit and Nut granola (I often enjoy it with Blue Ridge Dairy's Greek Yogurt lightly sweetened with local honey).  I also asked about pizza dough, having read in the Mount Pleasant Farmers Market newsletter that Atwater's offered it.  My intent was to make a delicious pizza of asparagus, apple-wood smoked mozzarella and ramps.  But I was told there was a misunderstanding; Atwater's didn't sell pizza dough.  Apparently the previous bread vendor at Mount Pleasant sold pizza dough and that assumption carried over to Atwater's.  I guess my disappointment was visable, as the young lady at the counter apologized for the mix up. I quickly had to restructure my meal plan in my head but was still happy to see that Atwater's was expanding to other markets in the DC area. 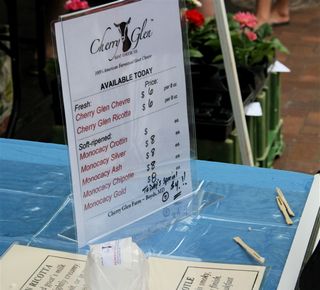 Before leaving the market, Brian and I stopped by another new vendor, Cherry Glen Goat Cheese Company.  Using the goat milk from their Cherry Glen Goat Farm, Diane Kirsch & Wayne Cullen create artisanal goat cheeses of numerous varieties.  When we approached the table, David Rifkin, a Cherry Glen Goat Cheese seller, happily began talking to us about the difference between goat cheeses bought in the store and what Cherry Glen offers.   According to David, goat cheese has a limited shelf life and often times the cheeses available in the store are at the end of their cycle.  Because of this, store bought goat cheese has a much tangier flavor and more grainy texture than a fresher, carefully crafted goat cheese.  I sampled the Monocacy Gold variety and fell in love.  Unlike the goat cheese I have bought from grocery stores, this cheese had a smooth quality with an almost nutty aftertaste.  There was a richness in the depth of its flavor, without the sharp tang I often associated with goat cheese.  I could have easily spread this cheese on a loaf of bread topped with balsamic vinegar infused caramelized onions.  When David said they were running a special on the Monocacy Gold ($4 each), I happily snapped up two packages of it.  I knew immediately I was going to make a tart using the Monocacy Gold and carmelized onions.

I wanted to add some ramps to the tart, but couldn't find any at the market.  Ramps, also known as wild leeks, have a short season at the beginning of the Spring.  A treasure among foodies, ramps are one of my favorite crops to experiment with during their season.  I had been looking for them since the beginning of April to no avail.  I was told New Morning Farm was selling them at Dupont Circle on Sundays, so I figured I'd need to make a trip there on Sunday to get the ramps for my tart.

My shopping bag was loaded down, but I still had plenty of cash in my wallet.  Surprisingly, the prices at Mount Pleasant are much more reasonable than most of the markets in the area.  Although the market isn't as big as Dupont or the Falls Church Farmers Markets, I was able to get everything I needed for the week with a little extra green leftover.  I headed home with my purchases...only to make room for a trip to the 14th and U Street Farmers Market, also opening on the same day.  More, however, on that trip next time. 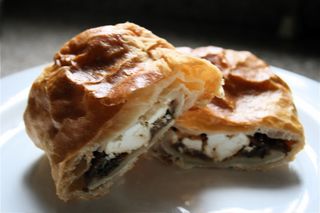 For the egg wash:  one egg and a tablespoon of water whisked together

In a large skillet, melt the butter over medium high heat.  Add the onions and stir consistently to prevent the onions from sticking to the pan.  Continue to cook the onions until they begin to brown and soften, about 15 to 20 minutes.  Add the chopped green leaves of the ramps (reserve the stalk of the ramps for later use) to the onions and continue cooking until the ramps begin to wilt.  Remove from the heat and allow to cool.

Roll out the puff pastry until it's a large rectangle and is 1/4 inch thick.  Using a pizza cutter, cut the pastry into six rectangles.  Place one to three small slices of the goat cheese (depending on how cheesy you like your tarts to be) in the center of each rectangle.  Using a tablespoon, top the cheese with the cooled caramelized onion and ramp mixture.  Fold the ends of the pastry over the mixture and then fold the sides over.  Place the tart on the baking sheet and repeat the steps until you have made all the tarts.  Brush each tart with the egg wash and bake them for 20 to 25 minutes, or until golden brown and firm to the touch.  Allow to cool before serving.

The Mount Pleasant Farmers Market is open on Saturdays from 9 am to 1 pm at Lamont Park (between Park and Lamont Streets).

I finally stopped by Radius Pizza for a pie the other day. All I can say is that it was about time. I've been hearing about this place all over, between DCist, DR.com and eGullet. All of the feedback that people have been giving has been very positive, which is why I'm so surprised that I was as disappointed with the pizza as I was...

First, a plain cheese pizza is $17. That's too much for a plain pizza. That said, A large pizza is HUGE, measuring at about two and a half feet in diameter.

Second, the crust was just missing the right flavor and texture. It might have been that I had to wait till I drove home to eat it, but the crust had a very chewy texture to it. I ended up leaving most of the crust on my plate. The good thing about the crust was that it was the right thickness and when you picked up the slice, there was that ideal "floppyness" that you're supposed to get when you pick up a slice of NY-style pizza.

I did think that the cheese and sauce were pretty good and the pizza was topped with the right amounts of both, but it really didn't make up for the crust. I probably need to go and actually eat the pizza at the restaurant to see if it tastes any different.

Another thing I noticed is that the staff is very friendly and courtious. While I was waiting for my pizza, I sat at the bar for a short time and had a beer. The bartender was friendly as were the waitresses that passed by.