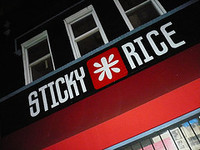 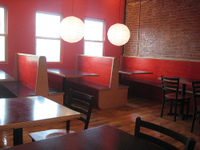 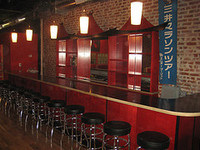 I'm not really sure how to classify Matchbox. They have a menu similar to Chef Geoff's or Cafe Deluxe, but maybe a little fancier -- and then they have pizza. There's ALWAYS a crowd and people tend to make a big deal about the place. I went there at 2:30 on a Saturday and I still waited 20 minutes for a table -- it must be the location.   The MCI Center is the ideal area for a restaurant like Matchbox, where you can get a wide variety of dishes that satisfy everyone in your crowd. (Although Matchbox isn't great for seating a large crowd.)

The layout of the restaurant takes full advantage of its location in a thin row house. Downstairs, you have the bar and pizza oven, which take up most of the first floor. The second and third floor are where the tables are. Overall, the restaurant can only hold a mere 59 people according to the Fire Marshal.

Our hostess was very helpful. We were there with Noah, and she was very interested in both him and Amy. How old is he? How are you feeling? We get that just about every place we take him too, and who can blame them? He's a beautiful baby. The hostess was able to get us a table for four, which was nice because we could put Noah's carrier in a chair while we ate.

We had some of the infamous mini burgers. They come in batches of three, six, and nine for $7, $11, and $14 respectively. They're worth every penny in my opinion. The brioche buns are coated in about a quarter stick of butter each. The burgers are made with what seemed to be fresh Angus beef and topped with pickles and cheese (if you like). I could do without the mountain of onions strings, which seem like filler and are more of a distraction than anything else. I think the next time I go to Matchbox, I'll get two orders of the nine mini burgers.

To soak up some of the grease, we had a salad as well. The Bistro Salad was mixed greens with pear and toasted bread topped with goat cheese. We only ordered a half portion for $7, but it was plenty after the burgers. I rather liked the method of having a full piece of toast (rather than little croutons), buttered and toasted, and then topped with the goat cheese. It allowed you to tear off pieces of the "crouton" and mix it with the salad. The goat cheese was tangy like it should be and went well with the sweet vinaigrette.

For the big finale, we had the Matchbox Meat pizza. It came topped with tiny pepperoni, bacon and a spicy Italian sausage. While the toppings were fresh and flavorful, I wasn't all too crazy about the crust, which was weak and bland. Pizza, for me at least, is all about the crust. If the crust doesn't rise at the edges, there's something wrong with it. Also, the cheese and sauce went all the way to the edge of the crust. Eh.

I also have to note that the bar at Matchbox serves Magic Hat #9 on tap which gives it huge points. I know it's not the only place that has it on tap in the area, but still it's a great beer.

I think I'll be back to Matchbox the next time I'm over by the MCI Center. The mini burgers are worth the trip alone and I'd like to try some of their entrees rather than the pizza.

Dress Code: Casual
Smoking: Allowed at the bar
Closest Metro: Metro Center
Parking: There's not very good street parking in the area and there's no valet. Take the Metro.
Reservations: Not taken.
Baby-Friendly Rating: 3 out of 4 diapers. The stairs make for a difficult trek with the baby carrier and stroller, but the hostess made up for this with how accommodating she was.

You'll notice the new baby-friendly rating which is my diaper scale. No, this doesn't count the number of times we have to change Noah's diaper at the restaurant. It's just my ranking of how accommodating I think a place is for people with a baby.

Oh right. This is sooo original. Reviewing Ben's Chili Bowl are you Jason? Well, yes. I am.

So Amy and I went to the Carbon Leaf concert Saturday night.  Carbon Leaf was completely inspiring and sounded better than ever. You can read more about the concert on Amy's site .  Now on to the FOOD!

Prior to the concert, where we drank a whole bottle of wine that our friends had given us. The fact that the wine bottle is in the trash is no indication to how good the wine was. Rather it is an indicator of how incredible the whole night was. After finishing the wine at about 9PM we left for the concert. We probably had about 2 beers each there and we were surprisingly sober thoughout the whole concert (I remember every detail).

Afterwards the concert, I had a craving for some cheese fries. Believe it or not, I've lived in DC for three years and never eaten at Ben's Chili Bowl. I'd always heard from other people that it was overrated. Boy  were they wrong! It was around 2:30AM when the concert ended. On the way there Amy asked, "Do you think they are still open?" I replied, "Of course they are! These guys are THE institution of drunken, comfort munchies." I was trying to sound like the expert, but in reality I didn't have a clue. I was praying they were open because I was STARVING!! When we arrived, of course they were open AND there was a line. It was not too long, but there still was a line. Coincidentally, we recognized the guy in front of us. He was this complete TOOL that pushed his way through us to get closer to the stage. It's a long story, but at the concert he was with a girl and now he was alone. What a shame. :)

Unsure of what to order, we just went with a large chili and cheese fries. After we ordered we went over and sat at the counter and they brought the food to us shortly thereafter. The styrofoam plates and plastic forks were perfect. All I can say is that I could have eaten three helpings of the cheese fries. We dumped a bunch of chili on the cheese fries and dug in. About 5 minutes later when we have finished up the fries and chili, we were ready to order more, but something told us that we would regret the next morning. We decided to hold off.

On the way out there was this cranky woman that as we walked by yelled, "DON'T TOUCH ME. WHATEVER YOU DO, DON'T TOUCH ME!!" We happily obliged.

Overall I wouldn't have expected anything else from Ben's Chili Bowl. It was the ultimate DC "Foodie" experience. I'll be going back again, that's for sure.