Pindar Vineyards: A Nice Place to Visit, If You're in the Neighborhood. 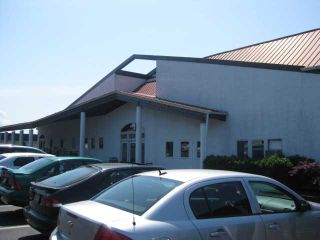 So any of us who have ever known someone who's thrown a wedding can probably agree that they are pretty damned stressful. A wedding may be made even MORE stressful if, five days before the main event, the bride and groom are informed that the venue is not yet complete, and that they will have to move the whole affair nearly 70 miles away. This is just what happened to my friends Jill and Evan (congratulations guys!) on their special day, and I was amongst the surprised attendees. Instead of the travel-friendly city of Long Beach (a mere stone's throw from Queens), the nuptials were to occur in Westhampton, playground of the wealthy, at the base of Long Island's South Fork.

I don't mean to sound as if I am complaining; the service was beautiful, and the reception must have been a blast, as I can hardly remember it. Also, the impromptu move also had two unforeseen benefits, as far as my party and I were concerned: 1) We had to take a ferry from Connecticut, which was fantastic, as boats are universally awesome, and 2) We found ourselves passing through Long Island wine country, which spans a good portion of the island's North Fork.

Like Virginia, Long Island has an extensive collection of vineyards to call its own, with some 40 of them in residence on the eastern peninsulas. While lacking the prestige of their Cali counterparts, LI wineries have an immense amount of funding (go figure, given the locals), and are therefor as numerous and grand as Napa's finest. Like the aforementioned county, LI has a main wine drag, Route 25, bragging of some 30 wineries in less than 15 miles. I wish we'd had more time, but a six hour's drive and pending matrimonial obligations kept us to one, so we sought out Pindar Winery (one of the few I knew, thanks to local distribution), a 500 acre founded in the 1980's in the town of Peconic. 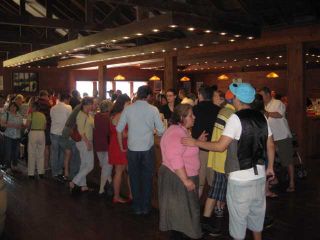 We pulled up to Pindar's wide white tasting room at about two o'clock, and parked in one of a handful of unoccupied spaces. Inside, we found three large, rectangular tasting islands absolutely packed with people. We managed to squeeze our way into a vacant section of table, and eventually got the attention of one of the rather harried bartenders. Pindar offers a selection of some 20 wines, of which one may sample five for five dollars. The three of us made different selections and shared, so we managed to sample a healthy number of them.

Because of the cooler climate and relative youth of the industry, Long Island wines bear a certain resemblance to Virginia wines, being earthy and a bit green, and quite often slightly sweet. Where VA focuses on Viognier, LI grows a good amount of Chardonnay, of which Pindar offered two. While the Sunflower Reserve 2008 was a bit oaky for my taste, the 2007 Peacock label was very crisp and satisfying, and we picked up a bottle for a reasonable $10.99. As for reds, Pindar offered a full compliment of noted varietals, including Cabernets Franc and Sauvignon, Merlot, and Syrah. We all agreed that the non-vintage Pythagoras, a slightly spicy, earthy, red fruit-filled Bordeaux blend was the best of the lot, especially for the very acceptable price of $12.99 per bottle. 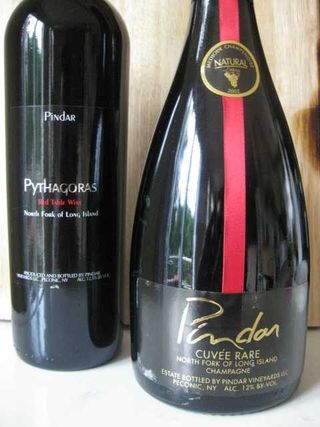 Pindar also offers a reserve list, with several high-end dry and sweet wines, available for $2.00 per sample. If you somehow find yourself on the island in the next couple months, make sure you drop the money on the 2002 Cuvee Rare Champagne. Though I don't know if I agree with the winery's claim that it is "an elegant rival to Cristal or Dom Perignon," the wine was fabulous, offering up typical sparkler flavors of yeast and soft red fruit, and a gorgeous orange-red hue. Oh, also, it is on sale for $14.99 (down from $27.99) till the vintage runs out, making it one of the best sparklers I've had under $20 from anywhere.

Amidst snippets of conversation with our very busy bartender, I learned that the place wasn't really going to "get crowded" until about 4:00 — I can't imagine what it looked like then! As it was, all the staff made a concerted effort to be friendly and helpful, and we ended up picking up four bottles. If you are planning a trip out that way, I highly suggest you make a visit. For those of you spending the summer on this part of the Mid-Atlantic, a good number of Pindar's wines are distributed through Suprex International, so ask your favorite retailer and see what they can get. 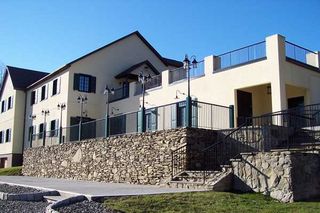 Last week I took a long-overdue pilgrimage to upstate New York to visit my parents. On Sunday, tired of the big-city bustle of beautiful Poughkeepsie (birthplace of Scrabble!), we took a ride across the river to the Shawnangunk Wine Trail.

Like Virginia, New York has a sizable wine industry — third in the country by volume, as a matter of fact. While the vast majority of the state's vineyards are concentrated in the Finger Lakes and Long Island regions, there are a good two-dozen wineries operating in the Mid-Hudson Valley. Most of the vineyards on the Shawnangunk are classified as farm wineries, and few produce more than a couple thousand cases per year. While familiar varietals like Merlot, Malbec and Chardonnay are gaining ground, a lot still focus on native American and hybrid varietals, which are better suited to the area's cold climate.

We visited several small vineyards over the course of the afternoon, many reminiscent of VA's Burnley Vineyards (one of my favorites, as I described here): quaint and rustic, offering up an assortment of sweet fruit wines and a few dry reds and whites. Our last stop of the day, Stoutridge Vineyards, was a different matter altogether.

The town of Marlboro, NY is one of those odd "developing" rural areas, where huge McMansions dominate the disused farmland, interspersed here and there with dilapidated double-wides and apple orchards. Stoutridge's facility matches even the biggest estate in the area. A 100 yard drive leads to a grand, Germanic looking structure of white plaster and gray stone, which houses the greenest winery on the east coast, if not the country.

Owners Stephen Osborn and Kimberly Wagner broke ground on Stoutridge in 2001, aiming to create the most natural wines possible, with almost no environmental impact. 3000 square feet of photovoltaic cells 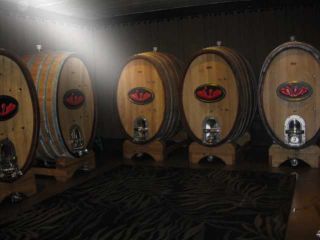 provide for all of the facility's electricity needs, while feeding a good amount of juice back into the grid. The winery is completely gravity fed, a relatively new method of winery design whereby no pumping is employed — grapes are crushed and fermented on the top-most level, fed through a pipe to aging tanks on the next level, and then sent down to the bottling line in the basement. The theory is that juice and wine may be damaged by the pumps' suction; while this is debatable, there is no denying that a gravity system saves a bunch of electricity. In order to save on barrel consumption, Stoutridge employs the giant Hungarian oak casks pictured to the right. These neutral containers will mellow the wine gracefully, and have a much longer useful life than your average wine barrel. Where most wineries will heat and cold stabilize — two energy-heavy and additive-based processes, used to give the wine clarity — Stoutridge leaves the wine completely untreated before bottling, employing neither fining nor filtration. 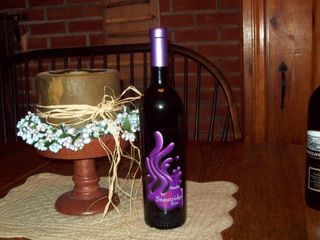 These processes, along with a commitment to local growers, sum up the Slow Wine movement. We were given a full tour, speech, and wine tasting from the owners, who are very enthusiastic about the project. But how is the wine, you may ask. Well, I think my mom summed it up best, when upon tasting the Quimby's Rose 2007, she exclaimed, "This tastes like the stuff the Italians would make in their basements when I was a kid!" Yes, the owners are going for local authenticity, and they got it — wines are grapey, musky, and funky, untreated and unadulterated, just like momma used to make.

Because of the fragility of this sort of wine, Stoutridge is not distributed, and is not likely to be any time soon. The winery will soon bring an all-natural distillery online — since liquor is inherently more durable than wine, I hope they decide to market their spirits to a wider audience. Though I can't exactly say I am a huge fan of these wines, I really dig what the owners are trying to do there, wish them the best in their endeavor, and hope that their success influences other producers around the country. If you find yourself in the New York area and consider yourself a fan of ecotourism, please give Stoutridge a visit.