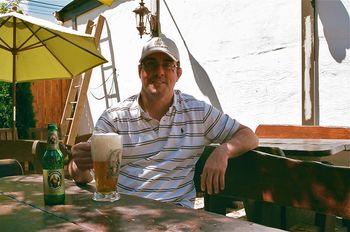 The word from Aaron McGovern is that Biergarten Haus will open this Friday, June 11.

Thirty-five hundred square feet of outdoor seating.  Thirty mahogany brown tables with bench seating to accommodate around 200 people ... outside. A kitchen cranking out the best of Germany's wurst, as well as locally baked pretzels and rolls. An upstairs bar and dining room with multiple flat-screen TVs airing live coverage of the 2010 World Cup. Three bars, 12 taps, 20 to 30 bottles all showcasing the brewing prowess of the German and Austro-Hungarian empires.

As cocktails and craft beer continue to dominate the D.C. drinking scene (not a bad thing), H Street's newest restaurant and bar is going to keep it simple by keeping it very German (not bad either).

There will be polka.

The Biergarten Haus is set to open May 14, and it will be big.

In fact, it's the size of the location that gave co-owner Aaron McGovern (pictured above) the idea to open a biergarten in the Atlas District. Aaron and his business partner Arturas Vorobjovas, who co-own the Russia House, have talked about opening a biergarten for years, but didn't have a location until they came across an old five and dime shop on H Street.

When Aaron saw the two-story building with its large patio space, he knew he had the ideal location for a biergarten, Germany's quintessential outdoor watering hole.

"As a young boy I grew up in Falls Church, Virginia, with three German families as neighbors," Aaron said via e-mail. "Having traditional family style meals every weekend opened my eyes and palate to this wonderful cuisine. The weisswurst, weinerschnitzle, sauerkraut, to name a few, were always my favorites."

While German cuisine will be on the menu, Aaron and Arturas don't plan to go too over the top with the theme. They are planning to have live polka music and are considering hiring an accordion player to come in from time to time, but don't expect to see the staff wearing dirndls and lederhosen.

Chris Chambers, regional director for the Russia House and Biergarten Haus, said the idea is to keep things simple so folks can enjoy themselves. So customers can come for the German food and beer (apparently they're working on a massive "King's Platter" of sausages and sides that is clearly aimed at the 'Skins offensive line), or to grab a beer and watch a soccer match on TV (they hope to be come a destination for D.C. soccer fans).

Chris also noted that the Biergarten Haus, near the corner of 13th and H streets, is a 10 minute cab ride from the Verizon Center, giving Capitals and Wizards fans a fairly close destination before and after games. For now, cabs and cars will be the means of transportation for most Biergarten Haus customers. The nearest Metro station, New York Avenue, is a long walk down H Street, and the trolley car line is at least a year away from completion. And until the trolley line is finished, H Street will remain a hot mess of construction crews and jersey barriers.

Aaron is taking the long view.

"We are only a year away from having DC's first European-style trolley, the road construction is rough but the construction crew are making progress daily," he said in his e-mail. "In the past seven months numerous new restaurants have opened, numerous abandoned buildings have been brought back to life. I find that the atlas/capital hill neighbors are very loyal to their business as well as very active the the continuing growth of the neighborhood."

Chris said the rent on the space is reasonable, which should help them get through their first year if the construction limits their customer traffic. In fact, the affordable rent led Aaron and Arturas to lease a space two doors down from the Biergarten Haus location where they plan to eventually open a European market that will offer a few things from the restaurant's menu, as well as sandwiches and other items.

As for those taps and bottles, Aaron has pulled in the Belgian beer knight himself, Bill Catron. The beer list is still be finalized, but expect a variety of beers from German stalwarts Spaten, Paulaner, Gaffel Kolsch and Eggenberg. However, Bill said he also plans to bring in some "gems," like Paulaner Pilsner, and is looking at ordering a few firkins.

"When you do go to drink beer, you want something a little bit extra," he said.

While the beers that Bill brings in will surely be good, the little bit extra most folks will be interested is the lot of outdoor space that will make the Biergarten a biergarten.

Well that and the beer. And the wurst. And the schnitzel. And maybe, just maybe, the polka.