The politics of food: Veal

I'm passionate about food, but I know it's just food. Once past the palate, it's all more or less the same. It's just fuel to keep us going until the next meal.

Nevertheless, food is political. Since Jesus broke bread with his apostles, food has always been more than mere sustenance. Food shows status and the lack of it. It's a statement about political leanings and personal choices. Food can bring people together and drive them to war.

Vegetarians swear off meat because they believe we no longer need to consume animals. Animal rights protesters picket restaurants to protest the use of certain ingredients. In the past few years, some of these groups have gone so far as to vandalize restaurants, intimidate staff and harass customers because they disagree deeply with the products on the menu.

Atop many activists' lists are surely veal and foie gras.

Few products seem to stoke people's anger more than the enlarged liver of water fowl and the meat of baby cows. And I think this anger is too often based on ignorance and agendas.

(Let me get this out of the way: I like veal and foie gras. I like them a lot. It was my interest in these products, as well as the controversy surrounding them, that led me to learn more about them and how they are produced.)

Most people, I believe, know little about veal and foie gras production. Most people are probably unaware that veal is a byproduct of the dairy industry. Therefore, the more cheese we eat, the more veal dairy farms will produce. And I do not believe most people know much about the process the French call gavage. It is central to foie gras production, so whether you plan to eat foie gras or protest it, you should be familiar with the forced feeding technique.

During my next two posts, I will explore these two products and provide recipes. In the end, you may be no more inclined to eat veal or foie gras than before. That's fine. At least you will know more about these products and why you may or may not want them on your plate.

When produced properly, veal and foie gras are fantastic products. When produced under poor conditions, they are every bit the epitome of suffering and animal cruelty that organizations like the Humane Society, Society for the Protection of Animals and the People for the Ethical Treatment of Animals claim they are.

Of course, every meat product we eat has or has had problems. Unfortunately, there is not a segment of the American agricultural industry that been free of abuses and abusers. Upton Sinclair might have exposed some of these issues a century ago, but as Robert Kenner showed in his film Food Inc., there are still plenty of problems today.Is the solution to stop eating meat? Some would say so. But given the numerous problems with the industrial production and importation of fruits and vegetables, maybe we should give up those foods as well.

That doesn't leave us with much, though.

Fortunately, we seem to be more aware of these issues today and interested in alternatives. That has given rise to farmers markets, Whole Foods, Yes Organic Markets, as well as organic and free-range options at traditional grocery stores like Harris Teeter and even Wal-Mart.

Veal touches a nerve for two reasons: the way in which the calves are raised, and the age at which they're sent to slaughter.

Traditionally, veal calves are male dairy cows, which don't develop as much muscle (meat) as beef cattle. And because male dairy cows don't produce milk, only a small number are raised to adulthood for breeding purposes. The rest are used for veal (if they weren't used for veal, they would probably end up as dog food).

The common way dairy farms raise veal calves in a hutch, or box, which restricts their movement, thereby keeping the meat as soft as possible. When a calf reaches about 250 to 300 pounds, it's sent to slaughter. Understandably, this method bothers a lot of people (by the way, this is very similar to the way most industrial chicken farms raise their birds).

Forrest Pritchard doesn't raise his calves in a box. He also doesn't raise dairy cows. On his Smith Meadows Farm near Berryville, Va., Forrest raises beef cattle on pasture land. A few of the calves are regularly pulled from the herd at four to five months for veal.

Forrest said he does this to give his customers the option of purchasing veal. It also doesn't cost him any extra money. The traditional method of raising calves for veal requires building hutches, having a building to house the hutches, hand feeding the calves powdered milk and grain, and cleaning up after them.

Forrest simply allows the calves to remain with the herd until they naturally wean from their mothers. Although this is a cheaper, more humane way of raising the veal calves, Forrest notes that most dairy farms don't have pastures. Therefore, dairy farms might see the hutch method as their best alternative.

Despite raising veal calves in a humane way, Forrest says he still faces complaints and criticism for selling veal. Some of these folks change their mind after learning more about Smith Meadows Farm and Forrest's sustainable approach to agriculture. Some don't.

Admittedly, I've never been very comfortable with the hutch method, though I've eaten a fair amount of veal. However, with the rise of free-range veal, I see few reasons to go back to the traditional product. But there are differences.

Free-range veal tastes different, looks different and is not nearly as tender as box-raised veal. Just as grass-fed beef has a richer, purple color than regular beef, Forrest's pasture raised, grass-fed veal has more color to it than pale pink grain-fed veal. His free-range veal is also lean, and has more omega 3 fatty acids and healthy cholesterol than hutch-raised veal. As for the flavor, it tastes a bit more like beef than traditional veal.

Because Forrest's approach to farming emphasizes allowing the animals to develop naturally, he has "zero interest" in foie gras. Smith Meadows Farm recently began raising ducks, and Forrest will sell duck livers, but foie gras is out of the question because it requires the liver to be artificially enlarged.

For this meal, I picked up a couple veal porterhouses from Forrest (actually, I picked them up from his wife Nancy at the Del Ray Farmer's Market) and a bottle of Ozzy from Baltimore's stellar brewpub, The Brewer's Art. The sustainable agricultural and local craft beer movements really go hand-in-hand. Both emphasize small-scale, high-quality production to create artisanal products for a local market. The Brewer's Art's Ozzy is a faintly sweet, Belgian style ale that comes in at about 7.25 percent ABV. A 22 ounce bomber of Ozzy can be found at a few D.C. area stores that have decent craft beer selections. But if you've never had it from the tap, it's well worth the drive to Baltimore.

To get started, pull the porterhouses out of the refrigerator 30 minutes ahead of time, lightly coat both sides with canola oil and season generously with salt and black pepper. Keep them on the counter while you start your grill.

While you're waiting for the veal and grill to warm up, prep the salad by combining the tomatoes and feta. I went with goat's milk feta because it is a little less salty than sheep's milk feta and worked a lot better in this salad.

When the grill is hot, make sure you are set up for off-heat grilling by having a hot spot (directly over the coals or a couple burners on high) and a cool spot (an area without coals or a couple gas burners off or very low). Place the veal chops on the hottest part of the grill and close the lid, allowing the meat to sear for two minutes. Open the lid and give the chops a quarter turn to create hash marks. Close the lid and allow the meat to sear another two to three minutes. When a brown crust has formed on the meat, flip it and sear for another three minutes with the lid closed. After three minutes, move the veal to the cooler part of the grill to finish cooking with the lid closed (five minutes more for rare to medium rare, and seven minutes for medium).

This is a bit longer than I would normally cook veal chops, but because the meat is denser they require a longer cook time. 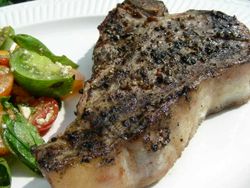 Once the veal steaks are cooked to your liking, remove them from the grill and cover loosely with aluminum foil. Allow them to rest for 10 minutes. While the veal is resting, place half of the lemon face-down on the grill. The heat will caramelize the lemon, reducing its citrus bite and increasing its sweetness.

Also, finish the salad by gently adding in the basil leaves, seasoning with salt and black pepper, and dressing with the olive oil, balsamic and the juice from the other lemon half. By the time you're done with the salad, the lemon will be grilled and the veal will be ready.

Drizzle the hot lemon juice over the veal porterhouses and enjoy.